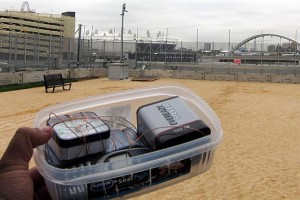 I read many of the comments before jumping in an reading the entire story from the UK Sun regarding the lack of security surrounding London’s Olympic Park. The story, which is quickly turning into a scandal has images and video footage of a construction working transporting a fake bomb through security checkpoints and inside Olympic Park. This security seems no better than what I experienced when I worked at the airlines.

I have written about security concerns at airports the past, how easy it was to bypass security checkpoints in LAX and SFO, when it was “mandatory” (yet not enforced) as an airline employee to go through a security checkpoint, adhering to the SAME rules and regulations as an air traveler. Now the Olympics are 82 days away and with the amount of money spent (£1billion) for security and precautions in place we see this major breach, including an 11-mile long electrified fence that cost £80million.

Fingers will most likely be pointed at the individuals in place providing security at checkpoints. Much like TSA agents, these people aren’t trained well enough to provide real security, especially to an event such as the Olympics, which will be a high profile event.

“An already-vetted worker could bring in materials for a deadly suicide bomb mission. The loophole exposed by us shows just how easily that could happen” (source). This same loophole existed at the airlines, even being gone for nearly 6 years I don’t believe it has been improved. Here is just one story I wrote in 2006 while it centers more around the vulnerability of air freight facilities and accepting material from “known shippers” I did elude to the fact I could enter the AOA (ramp) dressed in everyday clothes with a badge and not past through a security checkpoint.

The UK story says, “terror cells may use “clean skins” — people with no criminal or extremist links” when it comes to people operating knowingly or unknowingly when it comes to an operation. Never in 2 years at SFO and 9 years at LAX was I ever questioned while walking on the ramp. Who’s to say I didn’t have a device, much like the construction worker touring Olympic Park, just to prove a point that it can be done and concerns exist.