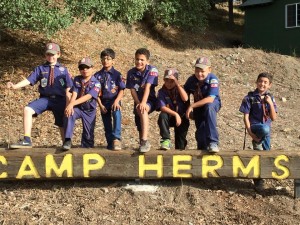 Last weekend was a whirlwind, overnight camping trip to hills of El Cerrito and Camp Herms with Den 7 of Pack 1155 out of Brentwood. Our den was fortunate enough have all the boys except one join in the outdoor fun. It was a very long Saturday, after a late Friday night due to The6th Floor Haunt at Vintage Parkway Elementary and there was even some doubt cast upon our trip because our new Coleman tent had not arrived. Thankfully the tent arrived in the late afternoon, but I was putting together our equipment late into Friday night.

The den leader and I were provided some “questionable” information regarding just how early we should arrive at Camp Herms. Being someone who does not like to run late I had my son up and getting dresser about 4:30AM on Saturday morning. We were rolling out of Oakley before 5AM and the GPS reading just about an hour of travel time down Highway 4 to I-80 before arriving at El Cerrito.

We rolled up and there was no one to be seen. In fact the organizers weren’t even ready to receive scouts, as it wasn’t even 6AM yet. We helped move some tables up to the BB gun range that would be used for learning geology. Once that was complete, Zachary slept and I wasted time on my mobile device. As the daylight advance on Camp Herms, headlights started rolling up to the registration area. A few minutes later registration opened, we got our camp itinerary and were ushered to the parking area. 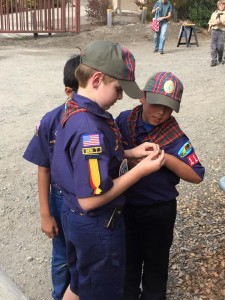 We were fortunate to see some of the other scouts from our den and we all walked down to the lower field, which we would call home for the night, as scouts were escorted to different areas depending on which pack they were grouped into, we were considered ‘Badgers’ for the weekend. The boys were required to set up their own tent, easy for some, not so for others.Having never unrolled our tent, it wasn’t overly complicated but Zachary did require some help flexing the poles in order to pop the tent up. He did a fine job and as I looked around the camping ground many parents were involved in the setting up of tents.

About 45 minutes later, all the scouts and parents met topside, near the registration area for the raising of the flag and a bit of history from the leader in charge for the weekend. Each adventure was explained, as the boys (dens) were broke into groups and we were off to Earth Rocks (geology). Each adventure lasted about 1:20, with a 10 minute transition time. After we completed out second adventure, Into the Woods, we broke for lunch. This meal was brought by the scouts and not provided by Camp Herms. Zachary and I both had sandwiches, chips and granola bars that tied us over until dinner. We also made sure we stayed well hydrated, as I brought my daypack with 100 oz of water flavored with Nuun tablets.

After lunch, I’ll be honest, my butt was dragging and the late night prior was catching up to me. As we broke from lunch we said good bye to the Astro Wizard, who provided some entertaining scientific learning after lunch and we made our way to the Camper adventure. The boys were a bit pressed for time and were rushed through tying a bowline, but they did learn how to set up a campfire and we made our foil packs (Hobo Stew) to be cooked for dinner. The boys then learned about geocaching and located their first treasure.

As time expired we headed to the final adventure of the day, Aware and Care. It was all I could do to stay awake. The scouts learned sign language and people with disabilities and wrote Halloween cards for a seniors home. It seemed to be the longest part of the day, as the sun began to set on the rock quarry in which Camp Herms is located. At the conclusion of the adventure we all got back together near the fire ring and discussed what would happen for the rest of the evening. Half the groups would go on a hike around the rim of the camp, the other half would eat. 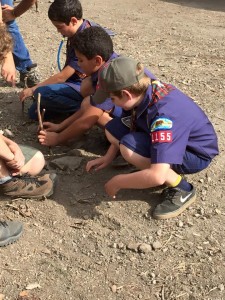 Thankfully, our boys were in the right group and we go to eat. I have to admit, Hobo Stew was not sounding too appetizing. I made the vegetarian version, which was two scoops of chopped, red potatoes, two scoops of peas and carrots and two scoops of assorted veggies, a small topping of sliced, white onion and some Italian dressing. To be honest, this wasn’t sounding very tasty. All afternoon long, the days had discussed having a pizza delivered for dinner, as a residential area backed up the lower field, where we were camping. This idea, as well as finding a local bar fell by the wayside and we ate Hobo Stew.

While it didn’t sound good, it tasted wonderful! Guess that means I was hungry, as I covered my stew in hot sauce and red pepper flakes. Thankfully I had saved my second sandwich from lunch and was offered some roti from a fellow scouter’s dad. Dinner turned out to a time to relax and reflect on the day. But the way was far from over.

After dinner, we switched with the other group and it was time to go hike. Now with the sun completely over the horizon, we put in about a 2 mile hike, which was very informative and relaxing. Looking out at the lights over the bay area and exploring the landscape above the quarry and overlooking Wildcat Canyon. All the boys had a great time with the headlamps and flashlights carefully navigating their way on the trails during darkness.

All the scout reconvened at the camp fire for skits and songs to close out the evening. Led by the Boy Scouts, many of the dens provided entertainment around the campfire as a very active day was winding down and coming to a close. At the conclusion of the event, we headed back to the lower field. It took me about 20 minutes and I was tucked away in my tent falling asleep. I know Zachary stayed up and played with the other boys, as they were in and around the tents for the next 90 minutes or so. It was lights out at 10PM. 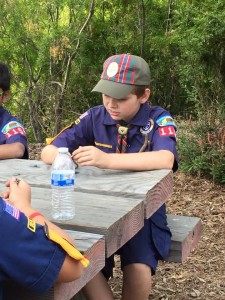 The following morning came early, as the morning dew settled on the outside of the tent. It would be a short day, as a continental breakfast, duty to God and retiring the flag were the only activities on the agenda. We got dressed and made our way up the hill to the kitchen to get breakfast. After about 25 minutes, many of the parents started to move their cars down the hills, parking on the curbs next to the lower field to make it easier to leave the camp. Our entire den did not make the retiring of the flag, as Zachary and I were  in the truck on the way home by about 8AM.

All in all it was a very productive weekend! All our boys are well on their way to earning their Webelos badge, as well as their Arrow of Light. We planned out our den meeting and achievements through April, which will put the boys well ahead of schedule to earn their badges possibly even a Super Achiever award for completing all the electives. It was a long weekend, but worth the time. Zachary enjoyed hanging out with the boys from his den, hiking, camping, eating Hobo Stew, learning about rocks and knots, plants and trees and having a great time. All this without any electronic devices. Pretty damn amazing, the parents on the other hand…highly recommended to go to the Webeloree!