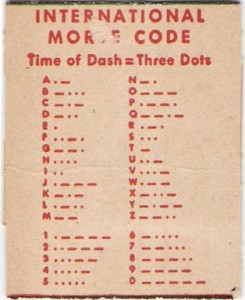 After spending 32 hours in the recent CQWW WPX CW contest I was a bit discouraged as I  finished the contest with 700 contacts, only to dissect the log file using SH5 when I hit upon many reasons why I did not achieve my goals. Even though I was frustrated, the contest was a success on some levels, as I wrote since I bettered my 2010 totals of final score, contacts and prefixes. On that level it was a success, but I wanted the opinion of another contester to give me advice, something the software program couldn’t accomplish.

I decided to contact Hank, W6SX who lives up in Mammoth and by his admission he doesn’t have the best set up, nor is very competitive when it comes to contesting. While his experience is measured years, he is much more fluent in decoding CW than I believe I am. After some discussion and comparison of our logs he provided some insight that I had not considered.

First and probably the most important was the lack of time I put into 40M. The low bands are the higher point bands in WPX and it was evident I did not spend enough time on 40/80M to make a dent into the totals I wanted to achieve. Part of the problem was staying awake into Saturday morning, but the other part of the equation was waking up 1-2 hours too late after a 4 hour nap. It was my hope to work 16 hours straight, but that didn’t happen. Needless to say conditions on Saturday night into Sunday morning were not as good as the previous day and unfortunately I missed many of the 6 point JA contacts.

After the first day, Hank said he only had about 500 contacts, similar to where I was after my first full day of contesting. Unfortunately with the sun going down, I faded and hank was able to collect further points. Why? Because of how we operated. Hank ran high power (1500w) and used the Reverse Beacon Network (RBN), I on the other hand, shooting for wallpaper (another term of an award) decided to run low power (100w) and unassisted, not getting the luxury the RBN or cluster, which I felt provided me the best opportunity at winning at least my call district.

Something that cannot be replaced is experience. I enjoy working CW and know Morse code, but I am still working on improving my skills. This is like many other skills, which if going unused might take some time to get back up to speed. During contests many exchanges are down at 25-30 WPM, sometimes at a fast rate. My feeling is I might struggle at trying to decode call signs at 25-30 WPM during a contest, thus part of the reason I don’t try to run a frequency and decide to search and pounce all my contacts, like I did in WPX.

The other suggestions I was given, was to use some of the upcoming summer contests as practice. He said the ARRL Field Day was a great event to use, while not an “official” contest, stations on the air will run all modes. This would allow me a chance to get on the air when many stations are participating in this event and probably be able to strength my CW skills without the worry of my performance. The second suggest was to download and install Morse Runner, which is a program that simulates a contest. After initially setting it up, you can start the program different modes from pileup to one call at a time, which improves your receiving and typing skills. Unlike myself, Hank uses this to work on while typing, but felt it would help improve my ear and decoding call signs.

His last piece of information was to set a goal to work the IARU HF World Championship that take place July 14-15. He believes 1000 QSOs is a possible goal, much like WPX was. The difference in this contest is that you are able to work CW and SSB contacts on all bands, which means that activity should be higher than it was in WPX. So between now until the start of this contest I will look to improve my skills, my goal being to improve my CW count for the 2012 CQP. I only made 41 contacts using CW last year and most all of those were calling other stations, not having those stations answer my CQ calls.

Final preparations are being made as we are just about 4 hours away from the start of the CQWW WPX CW Contest. The transceiver, just back from being repaired is in top condition, ready to put in a 36 hour effort. Last night, thanks in part to Hank, W6SX located in Mammoth Lakes, I was able to get a signal check using the SteppIR BigIR on 40M and 80M. Hank was able to hear me on both bands, so my low band antenna is ready.

I didn’t really put much of an effort into low band antenna, my hex beam. It has performed excellent since I last upgraded it a few years back. I did get on the roof and check the connection and realign the hex beam with north. Due to some strong winds the past week, the antenna was about 15-20 degrees off north. I double checked the rotator was working, as well as my digital interface.

One minor problem I encountered last night while testing, was the fact my antenna tuner on my rig was not work. I overlooked a menu function, which might have caused some of my problems on 80M with Hank, but after I turned the tuner on, 80M seemed to work very well. As it stands now, I just have to set up my macro keys on Win-Test and decide what category I will enter. Right now I am leaning towards single operator, all band, low power, unassisted. That might change depending on how conditions are once we get into the contest.

I have spent the last 90 minutes reviewing propagation charts and my spreadsheet that breaks down this contest by the numbers, for each band, each hour. By the numbers 1 million points is within my reach. Hopefully the low bands come through. More importantly, hopefully I am able to stay awake until 4 or 5 am tomorrow morning. That will be the biggest challenge. Wish me luck!

I want to pass along my thanks to Hank, W6SX up in Mammoth Lakes for his assistance yesterday in working with me to resolve my “chirp” issue. Hank gave me a call and we met on 4 bands yesterday (80M-15M) in order for him to listen to my problem. All worked out well as we started on 40M and then moved to 80M. Both of these tests were run with 100 watts.

Upon moving to the higher bands I had to start the Alpha 76PA in order for Hank to hear me through the noise. Unfortunately 20M caused some RFI in the shack that knocked out my Internet gateway and USB functions and digital interface until. So I had to restart the PC and turn the input power down on the FT-1000MP in order to get about 500 watts out and not cause RFI.

We moved to 15M, which had been my problem band as reported by NK7U and W7POE (via an OO Advisory Notice). After sending a string of ‘VVV DE’ for about 45 seconds Hank could not distinguish any sort of chirp and commented that my signal sounded clean.

I suspect it could be an intermittent issue because my CW signal sounded different yesterday than it did during the 7QP (InQP & NEQP) when the problem was reported to me. This also makes me reflect back to last year when Iain, N6ML e-mailed regarding my signal as seen on CW Skimmer and the “chirp” could be seen. Interesting, but I didn’t put much into at that time.

I did find out, thanks to the brain trust on the NCCC Reflector and at the FT-1000MP Yahoo Group that I do in fact have an internal AC power supply. I do recall opening the FT-1000MP up and toggling the switches to convert the radio to 12VDC when I bought it from Ken, N6RO. From what I have learned on the Yahoo Group is that any 120VAC power code, like that for a personal computer should work. With any luck I will have an extra one in my wire pile and be able run the Ft-1000MP off the AC power supply and hopefully rid myself of the chirp.