When I took ownership of the 1968 Mercury Cougar XR-7 in 2003 I had no idea just what this project would encompass. Without any knowledge or hands on experience prior to acquiring this car I was able to find an online resource as well as a local car club that assisted me, providing information and sources to help me learn about the Cougar.

I believe my initial problem was not prioritizing the work, having a good starting point as opposed to just starting to tear the car apart. I chose the later option and soon I had a huge pile of parts, but nothing really got accomplished. After further discussion I decided to work on safety related items. Let me preface that by saying the drive down from Santa Rosa was shaky at best. The steering was terrible and it wasn’t until I torn down the front end and rebuilt it I found out why. After completing the front end I moved to rebuild the back end.

Prior to this work I had the transmission repaired in 2005 by a local shop, followed the be exhaust system. Once the front and rear end rebuilds started the cat was on blocks for about 11 months. Once completed I made a hasty decision to remove the engine in April, 2006. Reflecting back, it was probably a good idea, albeit a bit costly. Yet like the front and rear ends, the exhaust and transmission this work needed to be accomplished. Thankfully it was still during a time I had money to pay for the work on the 302 engine being rebuilt.

With more time falling by the wayside, I became discouraged with the Cougar. I was making very little progress, mainly because of my family and work responsibilities. When the engine returned about 4 months later (2006) I had was bitten again. Much like previous attempts, time and money were against me. I was able to find time to start cleaning the engine compartment with the goal of painting it black and reinstalling the engine.

That puts me where I am today, in a quandary as to where to begin. With the small repair made last week in the engine compartment I am thrilled to be finding some time to invest into the Cougar. Making the car drivable in the near future isn’t the current goal. I feel with many of the major parts removed from the car it could be in my best interest to fix what’s broken or replace parts due to age before working on the body in order to prep it work painting. Thankfully I have a friend who is an expert in the bodywork and painting of cars to help lead me.

The cleaning of grime, the sanding of rust and removal of sprayed undercoating continues. I am still thankful the car is not a rust bucket. While there is quite a bit of surface rust, I don’t have any major areas that will push though, like the battery tray did. I can’t even put a time frame on the completion of the cleaning of rust at this time. The engine compartment is about 90% cleaned at this time and I still need to remove some hoses and wiring harness, as well as the steering column before I can finish the remaining 10%.

I also need to inventory the new parts I have. As I mentioned, I spent quite a bit of money on new parts that are still in the box. I never opened them since I was not ready to replace them. So while I am still without a real starting point, I have much work to accomplish. Maybe jumping around from area to area is way to go. Who knows maybe it will be sooner than I expect that I could have accomplished enough work that the Cougar might actually start and roll with a driver behind the seat. 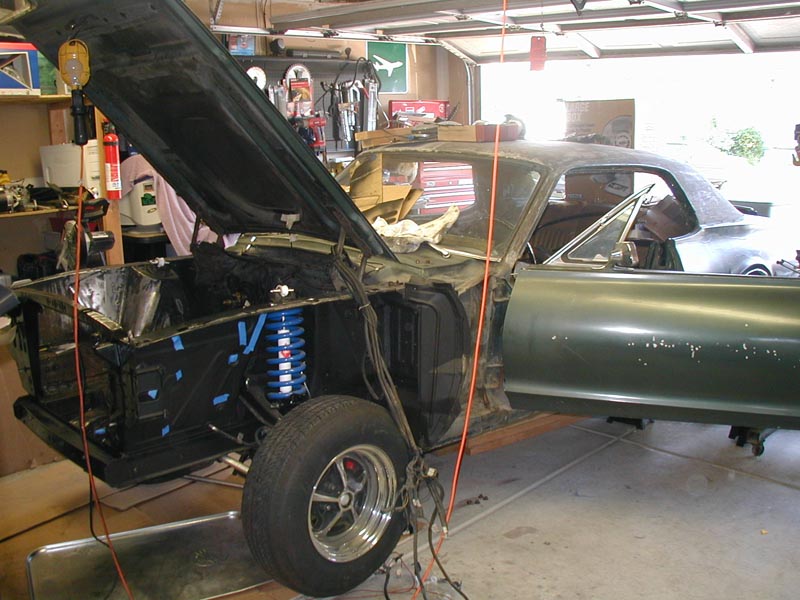 I made it official today, I will not have my ’68 Cougar ready for the Classic Cougar Picnic on July 16. While we are still about 6 weeks away I realized that I have more work than meets the eye. And every time I look again something else seems to catch my eye. But even without a Cougar at the picnic, I still intend on bringing the family along for a fun filled day.I spent about half the day working on the Cougar continuing to remove parts from the engine compartment and prep the walls for painting. I think I miscalculated the time needed to finish clearing the engine compartment of parts as I finally got the proportioning valve off the fender wall. Unfortunately, I added yet another step to the growing list. More on that in a minute.

I still keep in contact with the previous owner I got the Cougar from. He lives north of me, about 90 minutes away. I had e-mailed him about 10 days ago looking for information on the torque converter. While he was not sure about the difference in color [now green], previously orange in some pictures he sent me from 1988, he passed on some other bad news that I have to deal with.

Speaking about the proportioning valve, here is what Jason, the previous owner had to say, “I had a war with that thing almost the whole time…developed a leak and brake fluid was constantly coming out of it. Trying to remove the valve was no good because the nuts were frozen solid to the brake line. Eventually I gave up and just kept filling the master cylinder every couple of weeks.” 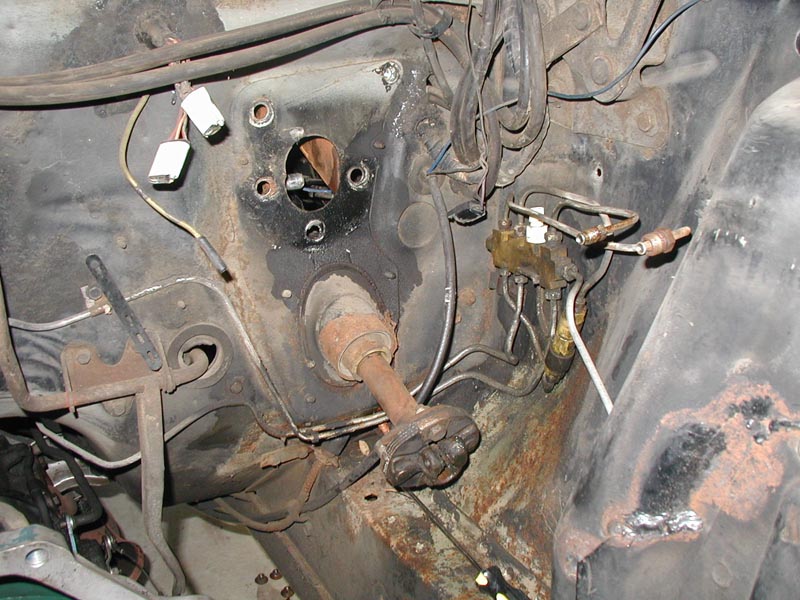 Today, I just gave up trying to get the nuts off the brake lines and had to cut them, for fear any more torque I put on them would rip a hold in the fender wall. While I was not planning on picking up new front brake lines, I had been looking at a few different online vendors, just in case I had to go this route. Well, today that was the path less traveled.The battle is only half over though, because I still need to brake the nuts loose from the valve, now that it sits on my workbench soaking in PB Blaster, in hopes of loosening the nuts on the lines remaining in order to reuse the proportioning valve. I don’t want to think about ordering another valve, but I might have to and I know they are not cheap. I also now know why the area around the valve is rusted and seemingly wet, from the previous fluid that had leaked, similar in nature the rust I had to treat on the battery shelf.

I am now down to the last few pieces of air conditioning that protrude from the firewall. I know one of set of pipes belong to the heater core, not sure what the other two are for, but I believe the hoses ran from the compressor into these two connections. Since I will not have any air condition in my Cougar, I might just remove the remaining parts and save them.The only remaining part to remove will be the transmission. This was going to be removed prior to the engine being reinstalled. But I might pull it out in order to paint the bell housing and clean it up a bit more. Oh yeah and while it is out, the torque converter will be replaced with a B&M Holeshot 2400, on recommendation from Arron, the engine builder, this will allow for a more aggressive cam, at least that is what I was told.

Just got off the phone with Brentwood Transmission. The good news is  that the transmission is in rather good condition, since its last rebuild in 1997. I guess there are some bad splines on the front planet  and the transmission mounts need replacing. As for the bad news, the flywheel and starter need replacing, engine mounts are shot and there is a vibration in the drive shaft. A bit more than expected, but nonetheless it needed to be repaired, so I just told them to go ahead  and do it. I should have the Cougar back by Wednesday, hopefully by then  the parts from PST will have arrived. Just called them and was told by the sales agent, the parts were  shipping on Friday, April 8. I could have a busy weekend working on the  front end?.

So it’s been quite a while since I paid any attention to the Cougar. The wife was sort of wanting me to sell the classic because of the lack of room in the garage. But after  contemplating, “what a mistake it would be” I decided I could not sell  it. I see too much in the car to let it go. With that said, I have about  $3000-$4000 to invest into the car, so I have been polling the minds of those folks on the Mercury Cougar Forums and a few buddies down in Los Angeles as to where I should start.

It looks like I am going to rebuild the front suspension, the C4 transmission, put on a 9″ rear end  and possibly rebuild the drive shaft. Guess we will see how far we can go  on what funds I have available. The brakes, while a bit rusted on the outside are still in good working condition. Also I am getting ready to reconnect the power steering unit. I have been thumbing through catalogs and online at some of the high performance web site  comparing prices and taking more notes, such as Summit Racing and Jegs.?