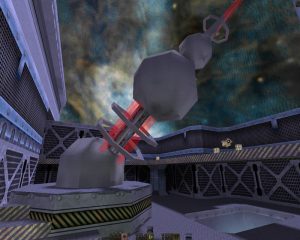 Welcome to this week’s episdoe of the Quake 2 Level of the Week, sponsered by PlanetQuake featuring a blast from the past, so to speak. This week’s review takes a page out of the 1930’s for those who ever wanted to build a backyard spaceship and zoom off to the planet, Mungo to battle the evil, Ming the Merciless. Thanks to Sven you can feel like Flash Gordon without every living the comfort of your computer as his latest level, The Death Ray is the prime setting for any Flash Gordon episode. So buckle up there young Flash and get ready to experience this week’s review.

Sven, on the concept of The Death Ray, “The general idea for a ’30s SciFi-themed map came to me in Nov. of 2000 while visiting the parents for Thanksgiving break…My ambition was to create a level that would make you feel like you were Flash Gordon and your opponents were Ming the Merciless’ evil minions…I finally just built the big laser cannon itself and that was a perfect start.” The rest as they say, “was history.” Coupled with the highest quality textures from PlanetQuake’s own, [H F X], this level represents a unique mapping experience, especially when it comes to 1 v 1 deathmatch.

The layout is what you would expect to see in a futuristic base, with narrow, sterile corridors traversing the complex, all of which seem to lead back to where you began. In the case of this level, you usually end up back at the ominous death ray. The level uses many jump pads, which allows for quick and easy elevation change, along with simple, yet effect ramps to access a few areas in The Death Ray.

The main feature of The Death Ray is infact a large weapon pointed towards the heavens which is discharging its deadly ray on some unsuspecting planet. While you can do absolutely nothing to stop it, it does make for a unique on which to build. The same can be said about the area beneath the death ray, which is home to the quad damage. The sign reads, “Power Discharge Switch: NEVER USE!” of couse our first inclination is to push it. Once the switch is throw [our button pushed], two yellow beams of pure energy are discharge, which criss cross over the quad, to help put the “DENIED” tag on those would be gamers who insist on hoarding this power up.

As mentioned earlier, the ambience is quite striking, thanks in part to the high quality textures of HFX. Finding good, quality textures is only half the battle, if you do not use the correctly and appropriately, then all is lost. Foruntanately that is not one of Sven‘s weaknesses. These textures in conjunction with the multi colored lighting provide a foundation for yet another example of how to create a level with true ambience. The only minor complaint is the texture used on death ray itself does not compare .

This week gameplay was not only limited to bots, but a real live opponant. Yet it always seemed I was the one on the receiving end of a rocket or riding the blue rail of death. Nevertheless, 1 v 1 deathmatch provided a fast playing level. As with the 4-6 bots in the game, most of the fragging took place on the upper levels, near the rail gun and rocket launcher which are virtually next to each other. “The weapon and item loadout is roughly the same as it has been for the [previous] levels so far,” says Sven. Yet gamers were able to navigate quickly between rail and rocket and control a majority of the map. Add to that the flak jacket and row of armor shards and you will see why controlling this area will work to your advantage.

The Death Ray is bound to remind you of your favortie science fiction story, but this time it is brought to life, thanks to Sven. This is a very balanced level which will suit the smallest of servers, and provide hours of action for a moderate sized group. As always I enjoy play testing and reviewing, such quality maps as the Quake 2 Community continues to provide. Now off you go to download, The Death Ray.