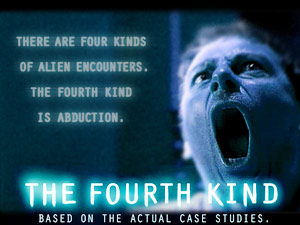 Before adding the movie The Fourth Kind to my queue on Netflix, I did not think much about the movie. It came up as a recommendation because of the background nature of the movie. Alleged alien abduction. I can already see some reader shaking their heads, at such an outrageous claim. Regardless of what you think, I found the movie rather intriguing to view, since I had not done any prior research on the film, it’s background or “real life” story that makes up the plot.

*Spoilers ahead* The movie centers around a hosted television interview through Chapman University with Dr. Abigail Tyler, a psychologist in Nome, Alaska who discuss the “fourth kind” of close encounter. Abduction. Tyler, played by Milla Jovovich, best known for her work in the Resident Evil series, records numerous therapy sessions with patients who have similar experiences and claiming to see an owl in the window.

After the mysterious death of her husband, Will, she undergoes her own therapy session with Dr. Abel Campos, a psychologist from Anchorage and colleague to Tyler. Her regression session raises questions as to her husband’s disappearance. After hearing similar stories from numerous patients, Dr. Tyler believes they were possibly abducted.

After Campos is unable to draw an further conclusions in regression session with Tyler and calls in a language expert after hearing an unidentifiable language recorded. Dr. Awolowa Odusami, an expert in ancient languages and called in by Campos. He identifies the language as Sumerian.

It’s the abduction of Ashley, Tyler’s daughter that brings the abduction theory to life, a portion of which is caught on video by a police patrol car that was guarding Tyler’s house after she was confined to her home by the sheriff.

Like many alien/abduction based movies you never get that good glimpse of an extraterrestrial or a UFO, but you get what could be discerned as “not of this world.” In each of the regressions, the video scrambles and the audio is broken, as violence seems to erupt in the background. This was the case each time the entity spoke in Sumerian and the UFO took Ashley.

In the end, nothing is resolved, the film goes on to discuss each of those involved in the film, leaving the audience to decide. As credit scroll, taped phone calls of people recounting UFO sightings play.

If I would have read reviews or followed the movie prior to seeing it, I don’t believe it would of had as strong an impact as it did. The movie is filmed in the same vein as Blair Witch Project of Paranormal Activity, on a low budget and through the use of a home video camera. Still the interspersing of archived video combined with the dramatization is well done and does provide a story from two different angles.

I do have an interest in the subject matter I was taken in by the film and when it was over, I thought what I had just seen was the real deal. Guess that is what the director would have wanted. Still, even if you have read reviews and know that what you are seeing is a “hoax” and these incidents in Nome did not happen, the movie still holds entertainment value. I would recommend it for those who take an interest in the abduction theory or like a good paranormal thriller.

The movie centers around a chain of disappearances in the remote region of Nome, Alaska from the 1960s to present day. A few years back the FBI was called in to investigate the abnormally high disappearance rate, but their conclusions were somewhat inconclusive.

At the center of attention is Dr. Abigail Tyler (psychology), played by

There are some interesting use of split screen, as well as actual video and audio footage to support Dr. Tyler’s claims. At the beginning of the movie Jovovich explains the use of this original material in order to help support the claims made by the movie. Convincing? I guess that is up to you the viewer. I thought it to be rather well done. Of course other Internet based claims are so fond of it.

As the story rolls along, Jovovich starts having her own mental issues an sees her shrink, Abel Campos. Through out the movie there seems to be a connection between all the regression sessions we see from the archived footage into the strange and unexplained disappearances in Nome.

It becomes evident an extraterrestrial force is at work when Dr Tyler records a late night session of “Scott” while mentally suffering in his home. The video is rather shocking as the regression seems to go wrong, as an unknown voice, a presence is heard through the body of Scott.

Enter Awolowa Odusami, a expert in language who recognizes the unknown language on the videos as Sumerian. He long with Campos attempt to work with Dr. Tyler to figure out what happened, not only to her husband but to her.