Can I buy some more time, please? I always run out of time when it comes to trying to stay on top of development for Urban Terror, moderating the forums, hanging in IRC on ETG, shoutcasting for the Team SportsCast Network and my daily routine. Ah, what the hell. I guess it is time to bring you up to date on some of the “thangs” as it relates to maps.

First, a map depot, since the development team is not going to host a “real” map depot, I along with a few others will be working with INVIS when it comes to a true map haven for those homeless mappers. “Its coming. A few of the community mappers got with Oswald and expressed our concerns about maps and why people don’t play them. After a great amount of discussion we decided to come up with a new map depot that has not just every map to download from a fat pipe, but reviews and screen shots of each of them,” says INVIS.

There is an interesting level being created for Urban Terror by slinki. “The setting is an abandon bolt factory that terrorists have converted into a missile launch site…Small to mid size with plenty of vertical play to appeal to your lemming side. lots of level changing as alternate routes which makes it look bigger than it is.” A working beta of this level is available. Click here to download. Quite a “vertical” level upon first glance, for a moment you could mistake it for a vanilla Quake 3 level. I will have to see if I can obtain more information as to what he plans on doing. Very subtle change of colors depending on what side of the level you are on, blue and red hint of lights on the walls. We will have to keep tabs on this project. Here are a few shots I took while checking the design out. Again quite impressive looking. 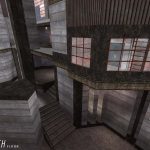 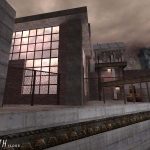 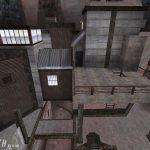 MAD-HORSE continues to turn out some impressive looking levels. Chemical Arena, which is featured as the Latest Action Fix is another level is has under development. More recently, he has been working on a level called, ut_TrainAssault. “This is a big map.. (10 vs 10? ..15 vs 15?!) ..and there is an “armored train” that moving around the map…Assault it…soon,” says MAD-HORSE. For more information and twelve screen shots, check out this thread from the Level Design Forums. As to be expected, MAD-HORSE has some of the most highly detailed, realistic textures in this level.

Another level we have featured on The 6th Floor previously is called ut_toxic from the guys who brought you ut_rumble, Team Mapness. Still waiting on a release date for this level. I believe while fragging on Thunder’s Playpen, the map was nearly complete said du Knifen. Here are a few teasers for you. Also, check out this thread: 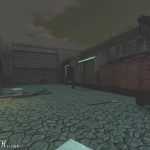 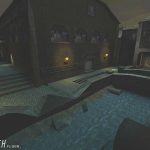 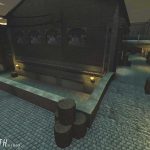 These are but a few of the levels under development. Still much work being down on the side of the development team when it comes to map. I finally got a near completed copy of WetWired’s ut_precinct last week. Took a long run through it and it is very impressive. Ranks right up there with Revolution, which I still continue to pimp as one of the finest levels around. Unfortunately, it gets very little play. But bomb/defuse should take care of that in due time. Maybe I will be able to share some more screen shots shortly.On a non-mapping note, I had to reinstall two of my systems the past week. My server locked me out and I was not able to hack into it. Thanks Microsoft! My game rig was action up as well, so if you sent e-mails related to mapping or tutorials, chances are it was lost. I believe I still have a few tutorials to upload. 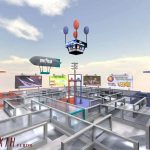 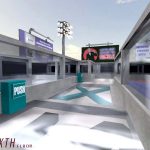 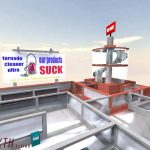 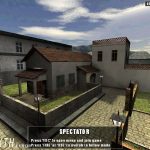 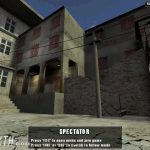 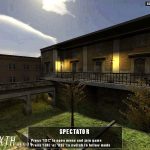 More news from Dick….Dick Dastardly that is. I received some new screen shots from Dick, who is working on a new level for Urban Terror. If might know his work from previous levels, such as Golgotha, which was reviewed earlier this week. He was also the author behind Campus, a level that was created for the Urban Terror Level Design Contest late last yet. To say Dick knows level design is an understatement. His levels are some of the most visually stunning works to date. 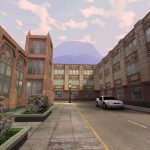 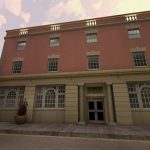 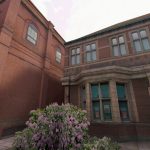 “These pictures of a city map are very much “work in progress”. I made just about all the textures you can see here with the help of my trusty digi-cam after a few trips round my neighborhood (and to the local botanical gardens). Ground and roof textures are temporary,” says Dick Dastardly about his upcoming level. For more screen shots click here.

Also spotted over on ARS Urban Terror another level from MAD-HORSE, who along with his Italian level design team have turned out a few levels recently, last ones being The Day After and The Day After2. The current project is based on that government facility that does not exist in the heat filled desert of Nevada, I’m talking about Area 51. Unlike that base, his level does exist. Low Ki has a special beta download available, along with screen shots, so check out the base that does not exist.

Oh yeah, also got the refreshing SniperCAM working. Just click on the picture and it will pop open a remote window that refreshes.

All the Rant archives are no online and available. If you want to check out what I have bitched about in the past, check out 1999, 2000 and 2001. The full rantings of an innocent man! More news later today as it becomes available…