I am glad I did not save all this work for the day of the contest, because there would have been no way I would finished it all before the contest started. Since the XYL is off at work today and my son is keeping himself busy with toys from Christmas I had time to further troubleshoot the SteppIR BigIR and connect the Yaesu FT-1000MP MkV in the shack.

Since it was more important to work on getting back on the low bands (40/80M) I decided to pull apart the SteppIR BigIR and take a second look at it. Yesterday was nothing more than replacing the spindle correctly to take up the slack on the copper tape that runs up and down the length of the antenna, depending on what band I am on.

It sounded terrible as I let it calibrate, eventually it stopped and thankfully there was no visible damage done to the sprockets or the copper tape. I then came in the shack and changed bands to 20M. A quick check and the tape was spinning and feeding into the antenna. I reconnected the 80M coil and the 1:1 balun and the antenna seemed to work. Rarely do I use the vertical for anything other than 40 and 80M because of the hex beam ends up working 5 different bands (10M thru 20M). This is the main antenna I use when contesting on 10/15/20M.

I then turned my attention to the Yaesu FT-1000MP MkV I got on loan from George, K6GT. I cannot thank him enough for lending it to me. Hopefully I can put in a good show this coming weekend during the ARRL RTTY Roundup and give George partial credit for allowing me actually get on 15M. It’s been a while since 15M working on my Yeasu FT-1000MP.

The easy part was to remove my rig and replace it with his MkV. Once the new radio was in place, I connected my radio to an adjacent outlet and began configuring the loaner unit. There were a few new menus and the front panel is a little different than what I have been used to. The menu navigation was just as easy. Some menus went unused, but about 20 minutes and I had the new rig configured with all my settings. I went off in search of a RTTY signal.

I found two hams having a QSO and it seemed I was decoding correctly using MMTTY. Half the battle won.  I found WM5DX calling CQ and answered his CQ. He told me I was “upside down” on my signal and he could not see my print. A quick flip to the correct menu and I modified one setting. I found WM5DX about 2 minutes later and answered his CQ. When he finally turned his beam towards me he said I was 10 to 20 db over. I was glad to know I could transmit and receive. 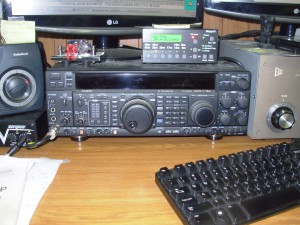 One minor issue I had was with the rotator and I can’t pin a reason as to why. I had to set up two ladders to get on top of the roof to investigate. I opened up the rotator housing to confirm all the wires were connected. They were. I checked the power in the shack, it was on, as well as the wires that move the antenna. All connected. I attempted to turn the hex beam a second time and it moved. So, while it was a problem momentarily it seems to have worked itself out. All the better, because the last thing I want to do is resort to the “armstrong” method of turning my hex beam.

So all seems ready for RTTY RU weekend. There will be 4 established practice sessions sponsored by the NCCC beginning Thursday with 2 different sessions, followed by 2 more sessions on Friday. While I can’t confirm I have either or both days off from work I am hoping to get both off. Since my 2010 effort of 652 QSOs and 49,552 points running high power (500 watts). This was one of my best efforts in ANY contest to date, based on the number of contacts made. I will post my goals on Friday.

Today I took my son and we headed south down towards San Jose to meet up with George, K6GT. After about a 90 minute drive from Oakley we arrived somewhat early in his neighborhood, so we kill a few minutes. Got to see where Apple is headquartered, that was neat. I called George about 11:45am and he said he was home, so we headed over.

I have seen George at some of the NCCC meetings I attend, but I had never spoken to him. Great guy, he is. He showed Zack and I his shack, completely with Elecraft K3 and Panadapter. No one he could loan me his Yaesu FT-1000 MkV, it goes unused in the closet. LOL.

He had the radio packed up in its original boxes with all the paperwork included. I think this is what they call a “selling point” as he made mention, “it’s for sale, name your price.” Wow, a MkV, the radio above mine, which has 200w output, although he said I would not get it. Still it would be great, since it is loaded with filters.

George even gave my son his QSL card for visiting his shack. Unfortunately Zack got very quick and shied away. At least he did say hello when we arrived. So I packed him up, and tied down the radio in the back the truck and we were off towards Pleasant Hill to get the wife.

Once home I took down the SteppIR BigIR and carried out to the front of the house to work on it. The copper tape was a complete mess. Thankfully I was able to straighten it out and get it on the spindle. I even got the spindle back on correctly (or so I thought) before connecting the 80M coil and balun and moving back to the mount to raise.

I spent a few minutes connecting all the cables up to the vertical and then made my way to the shack to fire it up. I turned on the controller and then attempted to calibrate the antenna. No sooner did I start that process and I got a very ugly sound coming from the housing. I let it run about 15 seconds and then powered it down. I was loosing light and decided I would take a second look at it tomorrow. No idea what it causing it to hang up now, hopefully the few seconds I had it on didn’t ruin the tape.

As for the radio, I held off setting it up tonight. With any luck it should be a seamless transition to the loaner rig. I will have to spend about 60 minutes configuring it the software I use. At the least I will have the low bands for the RTTY RU, but might be out of luck on 40/80M unless I can figure out WHY the Copper-Beryllium tape does not want to retract or extend.

It’s been awhile since I have turned on my radio for and attempted to make any contacts. My radio situation has gone from bad to worse, losing the ability to transmit and receive on 15 meters. This is compounded by the fact I also lost the ability to tune my SteppIR BigIR on any bands rendering it useless.

It was my hope to have both repaired before the start of the new year, but as we are now6 days away from the ARRL RTTY Roundup I am scrambling to find a usable radio more so than a repair for the antenna. Thankfully the NCCC or Northern California Contest Club is always up to help out a fellow ham. I posted a message to our reflector explaining my dilemma and George, K6GT was kind enough to respond and offer me the use of his Yaesu FT-1000 MkV.

Come the end of January I will need to send my FT-1000MP back to Georgia and WA4GEG to make repairs and possibly an upgrade or two. While the radio is dated, it’s the best I can currently afford. While many in our club have transitioned to the newer Elecraft K3 setups, many have some very good rigs being unused. Thankfully George was kind enough to allow me the use of his MkV.

As for the antenna, I am going to pull it down this weekend and see if I can make the repairs needed to allow the Copper-Beryllium tape to move freely up and down the vertical when tuned. I fear this will be easier said than done. Although talking to a tech at SteppIR, he gave me a few pointers, so with any luck I can get the antenna working without having to disassemble and ship to Washington.

I have not been all that impressed with the vertical. Part of that is because of the lack of a good ground system. Underneath the antenna is close to 1500 of copper of varying length, unfortunately the longer runs are what I am missing, so working on 40M and 80M becomes challenging.

Speaking of challenging the RTTY Roundup was one of the contests I fared very well in 2 years ago (2010), winning the category I entered; First Place, Low Power, Single Operator, East Bay. Was not able to put in any effort last year due to our remodel and I would love to come back strong this year and start the year with a real good RTTY Roundup. No idea if I would run low or high power, but given the improved solar conditions I would be inclined to run low power and see if I could best my 2010 record and win another award.