I started real strength training using a barbell and plates on October 22 thanks to Stronglifts. This after spending 5 months working out in my garage on a Bowflex Revolution, followed by another 5 months doing a split routine at the gym with a co-worker, who was my lifting partner. Yet during those 5 months prior to him passing away due to a heart condition, we never used a barbell. We used dumbbells in some of our work outs, but never did we perform the 5 lifts that have made me stronger than I have ever been.

Stronglifts.com is a beginners program, which can lead to other forms of barbell training from 3×5 and 3×3 to Madcow and Smolov Jr. I still consider myself a beginner and I am still adding week nearly each session to all my lifts. Sometimes I stall on a lift, which requires me to reattempt the weight a second and possibly a third time before I remove weight an attempt a lower weight in order to push through the previous weight I stalled at.

This was the case with my squat, I was able to get through 185 lbs. and attempt 190 lbs. last week. I came up one rep short on my 4th set. I still considered this a failed attempt since I didn’t get my full 5×5. So I reattempted on Sunday and it was absolutely pathetic, as I went 2/2/2/2/1 in my 5 sets. I was exhausted and I could not drive up, out of the hole with 190 lbs. on my back. I was frustrated because I was so close the previous time. How could I go downhill so quickly in just 3 days?

It took another set of eyes from the Stronglifts Inner Circle to see the errors of my way. I had been doing too many warm up sets. I misread the guide provided my Mehdi Hadim, owner of Stronglifts, instead of doing 2 reps at 45 lbs, I was doing 2×5 at 45 lbs. A difference of 8 reps. This was followed by 3×5 at 95 lbs. and 3×5 at 135 lbs. A difference of 26 reps. So I was added 32 warm up reps to my squat work out before I even got to my work out weight. It’s no wonder I was tired and straining to get through some of the heavier weights more recently.

My warm up routine has now been modified and I currently do a total of 11 reps (2×45, 3×95, 3×135, 3×165) before starting my 5×5 at my work out weight. Yesterday, it made a world of difference, not that the weight was any easier, it was still a challenge, but unlike the previous weeks I had the power in my legs to drive out of the hole to the lock out position and easily accomplished my 5×5.

This is the second mistake I have made while performing Stronglifts. The first was pointed out to me in January when someone mentioned that I “really loved the deadlift” as I had been doing 5×5 and not 1×5, as the program directs. This change allowed me to progress even further on the deadlift since it was only 1 set. It could have also been previous weights were easier to pull. Now that I am at 240 lbs. I have started using chalk and a mixed grip in order to hold on to the barbell with a stronger grip.

Two mistakes and countless minor changes over the course 7 months and I feel as if I am set to make some very good gains in the coming weeks. Add to that the introduction of intermittent fasting, now on a regular basis, going 16 hours without food before having an 8 hour window in which to eat. The running has taken off, as I put in 27.57 miles last month and through today I am already at 25.28. Hopefully this trend continues through June and July as I continue to prepare for my first half marathon in August. 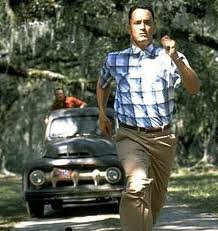 So the first month of training for my half marathon is complete for the Summer Breeze Half Marathon in San August. For the month of April I logged 27.57 miles in 4h:29m:38s. Not too bad for never having run for distance or training for any sort of road race. I skipped walking, power walking and jogging on the schedule and moved right into running, figuring I had done enough cardio at the gym that I could start right off with running. I do feel it was a good start.

I started off with a pace of about 9:45 to 10:15 per mile, but as of my last run on April 29, I was able to log an 8:48 and 8:55 in my two mile run. The best times I have put up yet. Hopefully I can add to my distance this month while dropping a few more seconds off my mile time as I work up towards 13.1 miles. It’s interesting to see the schedule only has one training session in which you run 10 miles. Not sure of the logic there. I know I will add a few other 10+ mile runs as I get closer to the race date. I might even drop in a 13.1 mile run, but that is still some weeks off.

For me, I have never liked running. Hated since we had to run the cross country course back in junior high at Twin Peaks Middle School. I was never good at running and could never maintain a good pace to keep up with many of my friends. Now, it’s all about challenging myself. I am not running to win a race. In my quest for health, I want to improve my cardio, even if that means having an adverse effect on my weight lifting.

I am growing to like running, being out in nature, alone with just the wind blowing through the grasslands of the California Delta. Much of my running right now has been in and around the Big Break Regional Shoreline in Oakley. It’s relatively flat, which makes for good times, but in my training for Tough Mudder I would like to find some hills. In fact I found one hill. Actually it’s an embankment to an overpass, which has had some foot traffic. I was planning on using this hill for my Tabata Training, but I fear it’s not a 20 second run up the hill.

Tough Mudder is going to be hard enough, but at 6,330 feet above sea level, in the summer is going to make it that much more challenging. So with running, I am trying to train for two completely different events. Everything I have read is that if you can cover 3 miles with requiring water, you should do fine. What I don’t want to lose is the muscle gains I have made thanks to Stronglifts. “Studies also show that there is a 9x greater decrease in subcutaneous skinfolds (fat) when doing HIIT than traditional endurance based workouts” (source).

With any luck I will continue to see a decrease in my overall time and an increase in the amount of miles I am running daily and monthly. I do feel better after a run, even though I am usually exhausted. I now look forward to grabbing my Brooks and hit the trails for a run. 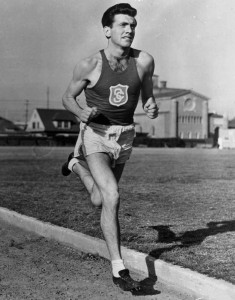 I knew the name Zamperini from the time I spent in flight training in Torrance, California as the airport was renamed Zamperini Field after Louis. His story, chronicled in the book, Unbroken: A World War II Story of Survival, Resilience, and Redemption by Laura Hillenbrand introduced me to the man. His running career and Olympic hopes were cut short by World War II, but he’s truly an inspiring individual who perceived through terrible conditions and events. Yet his story is a must read!

With the cancellation of my gym membership forthcoming I considered alternatives for cardio. At the gym I was pretty consistent with the cardio, which also made a BIG difference in those last 10 pounds I wanted to lose. I eventually worked myself up to 45 minutes of cardio, usually on the Precor Elliptical, targeting my heart rate for 142 BPM. While not as frequent I would climb the stair master or ride the stationary bike, but a majority of the cardio was on the elliptical. I was not a big fan of the treadmill, which was probably the most highly used piece of equipment in the gym.

Running was not my idea of fun, but I recall Louis Zamperini and the thrill he brought to running. Even in my younger years going back to junior high and high school I hated running the cross country course or putting in a mile of physical education. It’s no wonder I played goalkeeper in soccer. Tthat said, my college soccer coach loved to run. I still recall one fond memory of running with him and the team. I got so far behind, I got lost. It took me an addition few miles and an extra hour to get back to the practice field, by that time everyone was gone. Still, this was also one of the points in my life where I felt I was best conditioned as a runner.

Now some 25 years later I have taken control of my health, I have been faithfully working out with weights since January, 2012 and I’m experiencing the best healthy of my life. In order to supplement the loss of the elliptical, I have decided to take up running. I have a few co-workers who run, one training for a half marathon, followed by Tough Mudder. Even closer to me, my sister has been running for a few years now and loves it. She too was working towards a half and a full marathon.

I happened to be out running errands yesterday and sent a text message to a co-worker and inquired about running shoes. His response couldn’t have been more timely, as his recommendation of Roadrunner Sports was right across the street from me when I received his response. After taking care of my business I stopped in to browse. Well, let me tell you it was a true learning experience from ShoeDog and the sale associate. They spent about 15 minutes, including showing me what my footprint looked like (in 3D as well!), along with video from the treadmill of how each foot lands on the ground when running.

The sales associate took me through a few pairs of shoes, based on the information ShoeDog collected. I also learned not to wear cotton socks, as it retains moisture and could make my feet swell. I probably would have walked out with a pair of Brooks running shoes, but I was not wearing my doctor prescribed orthotics in my work boots and wanted to make sure the shoes felt as good with the inserts in place.

As for my running goals, hopefully I can start out running 3 days a week for 30 minutes, which should be able to get me about 3 miles. Starting out nearly at a 5K would be great! That’s a 10 minute mile, which I hope I can accomplish. I don’t think the times on the elliptical equate very well to running, as 30 minutes usually was just under 3 miles. I did find a 16 week training schedule that takes me from the couch to half marathon. While I don’t have any running race in mind, just like lifting weights or achieving health I want to be working towards a goal.