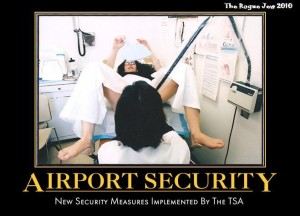 Another day, another video, from another TSA checkpoint. I don’t believe these people will ever understand their place, as it relates to airport/airline security. But your experience will be helpful when you apply to Walmart or the mall, so just remember that. Base on those few comments or past TSA related posts, I am not a big supporter of the TSA or their “iron fist” tactics at security checkpoints. This is one reason why I chose NOT to fly. The other reason, I really have no place to go, but if I did I would consider driving first.

While I do believe this woman is overreacting, with a bit of flair for the dramatic the ensuing video of her son being confronted, first by the TSA, followed by a ‘Ground Security Coordinator’ (GSC) from Southwest Airlines. “A Ground Security Coordinator is an employee of an airline who is designated to interface with aircrew, law enforcement officers, and others in matters of security.” This supervisor (I assume) tells the person filming, “it’s illegal” followed by “do you want to fly anywhere?” He is very confrontation and threatening in his approach. Hmmm, that was something I wasn’t taught when I went through my GSC training for United. Then again, I would not get involved in this situation, since it’s solely between the passenger and the TSA.

From the TSA Blog, which is really nothing more than a mouthpiece is this piece of information,

We don’t prohibit public, passengers or press from photographing, videotaping, or filming at screening locations…local laws, state statutes, or local ordinances might

Yet when the Phoenix Police Department arrive they do nothing to the individual filming and while not completely clear, they took the woman in question back out of the sterile area. Now there was some discussion this had happened multiple times by the family in question. Not surprise the local authorities don’t do much to back the complaint of the woman. Although, near the end of the video you can hear the peace officer say “I don’t think they will let you fly.”

There are other ways to go ab out making your Fourth Amendment Right statement. I have highlighted a few in past Aviation “in”Security pieces. I would stand up for my rights and refuse to be molested by the TSA. Chances are I would turn around and walk away (if they allowed me). It’s a broken process that doesn’t further aviation security. I have called it “window dressing” in the past and will stand by that statement. This “make work program” has not deterred terrorists from striking the U.S. or taking down our nation’s airlines.

Funny how the TSA turns a miscommunication (read their error) into a positive at Minneapolis/St. Paul International Airport on last Thursday (read story). Why a positive, because the agent of the “make-work” program actual did their job and detected a fake bomb in a suitcase being used as part of a “routine drill.” Unfortunately, the TSA failed to tell the local police. “Airport spokesman Pat Hogan said the good news is that the bomb was detected and the security precautions at the airport worked.”

I recall pre 9-11 when I all management employees (supervisor level) had to go through “training” for 6 weeks. As part of that training, we had a woman at United Airlines, who involved in airline security. She provided us training on using the x-ray machines and explosive trace-detection portal machines. Not sure this training as as “intense” as the rent-a-cops who staffed security checkpoints, but learning how to interpret what the image was on the x-ray machine was interesting.

This training was required as part of the job description for supervisor, to be trained as a Ground Security Coordinator (GSC). Part of those duties were also to “oversee” security checkpoints, one place I did not want to be. I still recall my only duty was to tell a family their Mylar, Mickey Mouse balloon could not come through the checkpoint. Talk about ridiculous! Allegedly I was keeping the airline safe and the concourse sterile.

Needless to say after this “formal” training I was nowhere near prepared, as an airline supervisor to be overseeing any security checkpoint. The GSC was nothing more than an acronym attached to the position due to the sensitivity nature of the job. I made many security type decisions, sometimes unilaterally and other times consulting other individuals or departments.

Unfortunately the dog and pony show known as the TSA has not made air travel any safer. Sure they can point to their track record since 9-11, as there have been no hijacking or terrorist attacks. Yet it’s not the TSA who has been deterring these thwarts attempts on aviation security. So continue to the with smoke and mirrors, make sure your grope, fondle and molest air travelers in the name of security.