Growing up in Southern California, it wasn’t difficult to find good Mexican food, nearly every corner had a taco shop. Being minutes away from the San Ysidro border crossing, authentic was a car ride away. Growing up my mom was an amazing cook! Maybe it’s where I gained some of my culinary talents in the kitchen. While Mexican was a popular cuisine, Indian cooking was a virtual unknown in our household. It wasn’t until I moved out, grew up that I first experienced Japanese curry, but quickly moved for the Indian variety. In fact, I experience some of the best tasting Indian curry, down under in Australia, when I visited some years back.

Since that time, I have been fond of flavors out of India; cumin, tumeric, garam masala, coriander, ginger, cinnamon, mustard seed and cloves just to name a few. Now that I have my own kitchen, curry seems to be a regular dish in my repertoire, as I am always looking out for new and different recipes to try.

It’s quite easy to find vegan Indian cuisine, unfortunately many of these dishes are loaded with oil when cooked. There’s a local establishment that has some great food, while all  vegan I know I should have made a wiser decision and cooked my own. It’s one of those meals you bring home and the containers are laced with oil, but the favors are incredible. 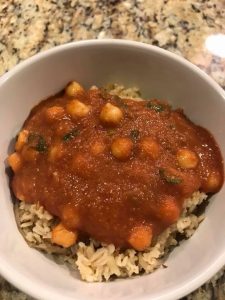 Looking deeper for vegan recipes from India, the oil can be omitted in nearly every case. Last night I made the Protective Diet Tikka Masala. Oil free, plant based, this was one of the best dishes I have made! It was coupled with Indian Style Basmati Rice I found off All Recipes. I failed to use the PD Indian Spice Rice recipe, as I missed it when I was reading the instructions. Then again, failing to read Julie’s recipes ALL THE WAY THROUGH, seems to be a common theme with me. Funny because it’s usually the FIRST instruction she has when you start the recipe.

Last October I had two weekend long outings with the Boy Scouts of America. It was leadership training for adults, where were broken into groups of 5-6. Along with camping, we were told to cook our own meals during the second weekend. In our group we had a leader named, Praveen. As luck would have it, he was from southern India, vegan and asked if he could do all the cooking. While we pooled our thoughts for meals we could cook, he came up with some excellent Indian food.

While I had heard of Chana Masala (Indian chick pea dish), I had never cooked it but Prvaeen sold us the mean by another name, Chole. This was our main course for dinner the second night. This dish is created several ways depending on the time and richness you desire. He pointed me to this video by Vahchef as a guide.

While canned chickpeas and premixed garam masala can be used, the flavors are enhanced when can soak dried chickpeas and use individual spices to create your personal garam masala. Soaking the chickpeas you are able to control of hardness of the garbonzo, but usually overnight is adequate. Garam masala is a mixture of cardamom, cumin, clove, bay leaves and mace. This spice can be found in any Indian grocery, but also at nearly any market you shop in the spice section.

Accompanying our meal was a dish called upma. “Originally from South India, is a hot favorite breakfast food! Made with semolina and slightly spiced to make a tasty dish that can be eaten for breakfast, brunch or as a snack,” as described by Sanjay Thumma. The word translated;  “up” means “soft” and “ma” means “flat.”

The basic upma recipe as cooked by Vahchef:

Directions
Add oil in a heavy pan ,add mustard seeds,cumin and add channadal ,peanutsand saute till they are cooked add urad wash, add chopped ginger,chillies curry leaves hing add salt and water bring it to boil add semolina/sooji slowly stirring continously so to avoid lumps mix well when all moisture is absorbed cover for 5 min and serve hot with chutney ,pickle ,sambhar and kids love to eat with some sugar (text from the You Tube video).

This recipe can easily be modified for a Protective Diet by removing the oil and the peanuts. In fact, when Praveen made it, there was no peanuts used, but he did use oil to heat the spices before the actual cooking started. However, it was the whole spices that really brought out a full, deep flavor in the upma.

One ingredient I had never cooked with, curry leaves. As I continued to search for more Indian recipes, I realized I had never seen curry leaves for sale at any market I go to, including the Middle Eastern markets I frequent. As luck would have it, a co-worker, who is Indian has a few curry trees growing in his yard and cut some branches for me. Fresh curry leaves are easily stored in a Ziplock bad, folded between newspaper in order to keep moisture off the leaves. Done properly, curry leaves could last up to 4 weeks in the refrigerator.

DIRECTIONS:
Drain tofu and chop into squares. Combine spices and lemon juice in a bowl. Add tofu, stir around and let marinate. I let it sit for about 20 minutes and warmed the oven to 350. Transfer the tofu to a cooking sheet and bake for 30 minutes. Move them around after about 15 minutes. Remove and let cool.

In a skillet, heat water. Next add the whole spices and warm for a few minutes. I made it a bit more than paste by adding a bit more water. Add the onions, garlic and ginger and cook till the onions are translucent.

Next, add the crushed tomatoes. Cooking the tomatoes is the KEY step in this gravy. If the tomatoes stay undercooked, the taste of the final product will suffer. So how do you know, well add the tomatoes and the spices and cook till you see the edges of the tomatoes separating from the pan (never saw this with my tomatoes).

Next add the almond butter, ½ cup of water and almond milk. Mix and let it come to a boil. Once it comes to a boil, add lemon juice and season to taste. Finally add the tofu and let it go for another 5 minutes, so that the tofu can soak the liquid and spices.

NOTES: I omitted ALL of the olive oil, it wasn’t needed to saute the onion and didn’t want to load the dish with unnecessary fat. I might use the juice of 1 lemon for the marinade since I omitted the olive oil. All the tofu was well coated when it went into the oven.

I also wish I had used some more crushed tomatoes in the recipe, possibly a 1/4 cup more would have made for a more consistent gravy.

DIRECTIONS:
Wash and soak lentils in warm water for 45 minutes. Defrost spinach. Heat pan and saute the chopped onion until soft. Strain lentils and add to pan, along with spinach and the remainder of the spices. Add water. Over medium heat let the lentils cook until soft. Lightly smash the lentils into the spinach mixture.

NOTES: First time doing a dish like this and it probably came out a bit dry, based on images I saw on the Internet of this dish. I would probably add more water next time and modify the spices used, possibly adding a bit of lemon juice as well. Overall the flavor was good, much like a curry but I feel I could have used a chile pepper or a hot sauce to spice the dish up.