The Pirate Bay’s response to the FBI seizure: “Go f#ck yourself.” Read more about it at Chaotic Fate.

Out of JFK comes a story of overreaction. It’s really no surprise given Big Sis’s “See Something. Say Something.” campaign the current state of heightened alert, then again I think since 9-11 the status has never been decreased. So I guess we are safer now than 9-11 *sarcasm*. Not really, Napalitano just needs the reassurance she has made the situation better, when in reality it’s turning into nothing more than a police state at US airports.

So how can individuals overreact today? Allegedly a passenger on a plane bound for the Dominican Republic “waltz” (the Port Athority words) passed TSA. I could see this, do you REALLY expect them to catch every piece of contraband? Considering this is a “make work” program and those individuals are nothing more than governmental “rent-a-cops” I don’t expect much at all, least of all feeling “safer” when (which is never) I decide to fly.

Upon boarding the Jet Blue flight, Eusebio D. Peraltalajara was asked to store his carry on bag. Upon moving it, the flight attendant saw “box cutters” fall out of the bag. This is where the TSA campaign failed and the situation was blown way out of proportion.The pilots were notified, which then set off a chain of event that included Jet Blue Security, the PAPD Emergency Service Units, the Joint Terrorism Task Force and the FBI. The report states the plane was “evacuated” and swept by canine units. These events also required passengers to be re-screened before they re-boarded the flight.

The passenger (thankfully) was not charged or arrested, explaining he used the “box cutters” in question at work and simply forgot to take them out of his bag.The TSA stated, “…a number of additional security layers that have been implemented on aircraft that would prevent someone from causing harm with boxcutters…and a more vigilant traveling public who have demonstrated a willingness to intervene.” Someone please fill me in, just how much did this dog and pony just cost the American taxpayer?

I think this just goes to show airline security is no more improved than it was before 9-11. Things will slip by the “make work” security guards at the airport and the result will be one over overreaction by a flight crew. I see this incident being blown way out of proportion because of a simple mistake by that of a passenger.You can read about the overreaction, here. 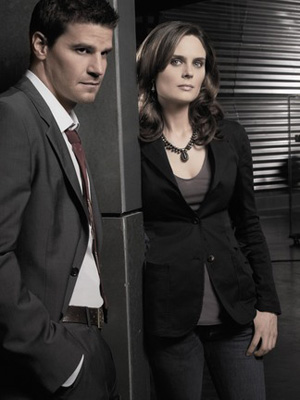 So thanks to Netflix I have started watching another television show that debuted in 2001 on Fox called Bones, starring Emily Deschanel as Dr. Temperance Brennan and David Boreanaz as Special Agent Seeley Booth. Not sure I had much intention to see this program when it originally aired, I recall the build up to it, but due to other shows and little time I never started following the series. And why is it so damn hard to come into the middle of a series? That’s a rant for another time.

I just finished watching the first three episodes of Season 1 and I am rather impressed with the show. I was a Buffy the Vampire Slayer fan, in which Boreanaz starred as the vampire with a crush on the vampire slayer, Angel. I enjoyed his work in that series and while never catching the spin off Angel, his work in Bones has been rather impressive.

Prior to watching the show today I had never caught any of Emily Deschanel’s work…that I can recall. She is a fairly attractive redhead who plays opposite Booth with the nickname ‘Bones’, “please don’t call me that,” she usually responds. She is on loan from the Jeffersonian (think of it as a fictitious Smithsonian in DC) Museum, where she is a forensic anthropologist, an expert in bones.

The show has some serious sexual overtones, from the Zack and Hodgins shooting a load because of the cute overnight delivery chick, who then takes a liking to Angela. The sexual presence is also there between Bones and Booth, but Bones seems to be so dedicated to her work she doesn’t seem to “understand that.” That being many thing outside of her immediate world, which usually deals with the dead, because bones do talk and tell a story.

So, while the onscreen chemistry works between Deschanel and Boreanaz, the stories might seem a bit far fetched for television. I guess that is when we forget reality and enjoy the show for what it is. Definitely not on the same level as CSI, there are quite a few similarities in the work. Yet I find it a bit disconcerting that a museum staff working for Dr. Brennan suddenly is torn away from their deaily routine and “loaned” to the F.B.I. in order to solve their cases.

Nonetheless, I enjoyed the first three episodes and most likely work my way through Season 1 and see where I end up at the end of the series. Thankfully the series is still in production through 2009, so there are at least 4 more seasons to enjoy, if I end up taking a liking to Bones. With Deschanel playing the lead role, I will probably continue to be entertained.