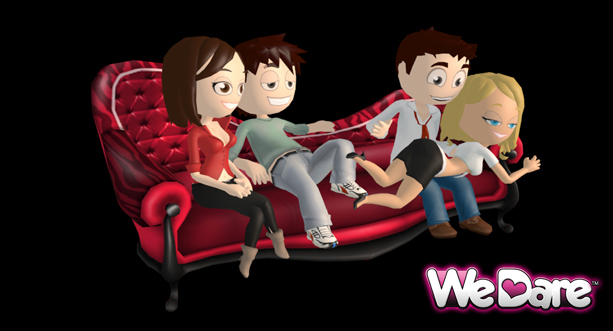 What sort of crap is the electronic entertainment industry trying to pull on the consumer now? I guess I should know better after playing games from 1995-2008 and participating on an amateur development team for nearly 10 years. There are two features that sell games. Sex and blood. Much like the media, “if it bleeds it leads.”

Just what am I talking about? The game is developed by Ubisoft, who has some hits in the past on all gaming platform. Recent development of game called Dare for the Nintendo Wii (and PlayStation 3). What’s worse, it’s currently tagged as a 12+ game. Now look further into the game, better yet watch the trailer before reading further.

Now as I parent, I am somewhat appalled at the game with it’s “12+” rating. First, I would not purchase this for my son, nor would I expect him to play it any younger than 16 or 17 years old. Now the games is described as a, “a sexy, quirky party game that offers a large variety of hilarious, innovative and physical, sometimes kinky, challenges.’ Hmm, doesn’t sound something I would want my 12 year old playing.

What is even somewhat more surprising, the fact Nintendo has licensed it for release on their Wii. Nintendo does market with the “family” in mind, as parents look to connect with their children. I guess my generation, having grown up with video games have it a bit easier than my parents, since they were already in their late 30’s, early 40’s when personal computers and gaming consoles were developed.

It gets very old, very quick when new games are released using “next-gen” technology. Obviously, with games using more powerful machines and having very high quality detail, it stands to reason that these games will begin to take on a more “realistic looking” appearance allowing gamers to take control of characters in a fantasy environment.

Here is another disturbing story from the San Jose Mercury News, “‘Manhunt 2 Ratings Stand’. Why is that every time we see a new game come from a company, like Rockstar Games, the ERSB takes them to task wanting to change a rating or something done in order to censor the game developer. A similar thing happened with the “hot coffee” mod, which allowed uses access to a sex scene in GTA: San Andreas.

This time, due to content in Manhunt 2 the ERSB wanted it to be labeled ‘Adults Only’ (AO). Just like the previous “mod” it requires some know how and modification to PS3, PSP and Wii game systems in order to gain access to this content. “ “Not only should the AO rating immediately be reinstated on this game, the Federal Trade Commission should investigate Rockstar and the ESRB to determine how this was allowed to happen again,” said state Sen. Leland Yee, D-San Francisco.. Wow! Liberal San Francisco and this senator wants to know HOW it happened?

I disagree, there should be no investigation into Rockstar by the FTC or some God damn sub committee in Washington D.C. How about you all focus on something more important. This “problem” if you can classify it as that should be left to the parents to deal with. If a parent does not know what their kids are playing on the PC or a game system, then they are the ones who are at fault, not Rockstar Games or any other developer who the ERSB goes after wanting to slap an ‘AO’ rating on.

Regardless of what the ERSB did in terms of rating, if a kid knows how to use a search engine, they could easily gain access to the FAQ on how to load the mod for Manhunt 2. Remember, video games don’t kill people. People kill people. Lay the responsibility on the parents.

As yes, politicians getting involved again, where they have reason to meddle. I am talking about politicians and video games. Come to think of it, that makes a great idea for a game, take aim at Boxer, Pelosi or Feinstein. Hell Arnold would be the “boss” level to beat the entire game!

There comes a piece out of the state capital, “Judge nixes California ban on selling violent video games to children.” As I said, politicians interfering where parenting belongs. “ The law, which was signed by celebrity governor Arnold Schwarzenegger, banned the sale of extremely violent games such as the popular Grand Theft Auto series to people under 18 unless they have parental consent” the opening paragraph reads.

Thankfully a federal judge saw better of this piece of legislation and blocked this from becoming law. Of course it will go to the U.S. Supreme Court where it will be reviewed again in January. Now why in the hell can’t can politicians steer clean of family issues when it comes to what is purchased by a child?

Better yet, let’s fine the retailers and penalized them for selling games while not adhering to the age restrictions set forth by the ERSB. No, that would make too much sense actually turning away potential sales and loosing money.

“We are extremely pleased of the ruling…a combination of parental choice and parental control is the legal, sensible, and most importantly, effective way to help parents keep inappropriate video games from children,” said Entertainment Software Association president Douglas Lowenstein.”

An effective way?” “Inappropriate games?” Of course they use Grand Theft Auto as an example. Again, this is a parenting issue, not that of the politicians. I guess it goes to show parents don’t really take the time to get involved when it comes to what they child is playing (games), watching or listening to. But I also think it’s not the job of legislation to regulate computer gaming.

I was eight years old when my parents purchased an Atari 2600. You remember the one [if you are old enough], a black game console with a simulated wood grain, some switches and a slot for the cartridge. We selected the game Combat and inserted the cartridge and threw the switch. I took control of my tank, maneuvered it into position and fired. My salvo struck the intended target. That was when I notched my first kill. I was hooked on the excitement of video games and the anticipation of “the next kill.”

Why does the gaming industry need to continually defend their actions when viciously attacked by those critics in the media? As we have seen in previous cases, such as West Paducah, Kentucky, Littleton, Colorado and most recently in Santee, California, which draws comparisons between violent video games and the behavior exhibited by minors.

A recent article which debuted in The Wall Street Journal Online, August 28 was posted on ZDNet headlining with, Game critics slam violent ‘mods’ by Khanh T.L. Tran. The main focus of the article is on the involvement of minors who develop modifications [mods] for popular PC games, like Quake III, Half-Life and as discussed in this article, Unreal Tournament.

One of the contributing factors that is rarely mentioned in articles such as this are environment and family. To bottom line incidents like this, it IS the responsibility of the parent to regulate and be involved with their children as their grow up and mature. It is not the responsibility of a PC game, a developer, web site or any other group. Parents should have an idea what the hell their children are involved in. They should not have to find out the hard way, by hearing there has been another school shooting and their child is the gunman.

Enter David Walsh of president of National Institute on Media and the Family, who contends, “that underage mod makers are the moral equivalent of teenage pornographers.” Dan Gerstein, communications director for Sen. Joseph Lieberman, Democrat of Connecticut says, “This is a whole new problem.” There is a bill that has been introduced in Congress to “penalize companies that intentionally market adult-rated entertainment directly to children.”

Those involved in the gaming industry, from publishers to developers, down to individual gamers who support this booming industry are continually scrutinized as a source of teen violence in society. The bill, is not directly aimed at mod developers, but software developers who falsely advertise their products with ERSB ratings, usually to a younger target audience.

A byproduct of this, are the active and talented gamers who decide to get involved and demonstrate their participation by giving back to their specific community by developing mods. Many happen to be minors who have been blessed with skills to create their own game, using a game like Quake or Half-Life. Yet, game companies, like Congress have no say over what sort of a mod can be developed. That is something left to the mod development team, as are the ideas and basic premise of any mod. Mark Rein, vice president of Epic Games Inc says, “If you don’t have the game, the mod is worthless to you.” Quite true, yet gamers will continue to “obtain” these games in order to play them, or to download and play the mods on which they were created for.

Mods give amateur software developers an opportunity to showcase their talents. Some of the most popular online gaming experiences have come from the modding community, such as Action Quake 2 and more recently, Counter-Strike developed for Half-Life. It is astounding to recall the number of gamers who have been involved in some of the largest gaming communities around. It truly becomes more than “just a game.”

Back to the environment and parental influence, as I touched on previously. How often do parents monitor what their kids play? How often to parents not purchase their child a game? How many times is that decision based not on the violence rating, but because of price? Yet, parents will be much more lenient when it comes to other media outlets, such as television, magazines and movies. All it takes is one hour of watching the nightly news to realize the real world is a violent place and not because of video games.

As David Wright of GameSpy Industries says, “The kids are going to get around any restrictions the industry is going to put into place.” Why would that be any different when it comes to mods, television, movies or any other media outlet? But continuing to tighten the stranglehold on the gaming industry is becoming ludicrous. Congress and Mr. Walsh’s organization should focus their attention on more important issues at hand, then to go after something which is not really there, but something the media continues to blow out of proportion.