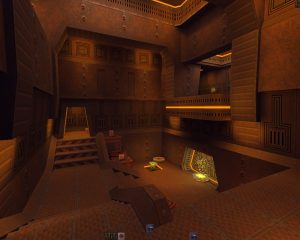 Without the PlanetQuake Community continuing to support Quake 2, the game would rest, covered in dust on some computer shelf next to countless other DOS games that were played out the day after you bought it. Of course Quake 2 is no ordinary game. I want to first thank Sven for keeping his Quake II web site, Sven’s Quake2 Reviews alive and kicking! That is where the idea for this week’s selection originated from and a damn fine choice at that! I continue to search out the best of the best and the new of the new when it comes to Quake 2 levels, so drop me a e-mail if you think your map has what it takes to be listed as the Level of the Week on PlanetQuake.

This week’s selection comes from John “Metlslime” Fitzgibbons, who recently had an older level reviewed by Sven. Thankfully John still has a current web site in which to check out all his levels and I noticed he recently released something new which caught my eye. Since I am all about “new” I decided to check out the work on his latest creation entitled, Derelict. “Continuing my tradition of monochrome level design, Derelict is a conventional two-atrium Quake2 deathmatch level clad in some of my Oblivion textures” says John. But don’t take the author’s work on it, check out the and then go download this week’s select.

While game play reigns supreme, a well designed map with solid concepts receives more praise when textured well. This level was design with uniquely created textures from Oblivion, which the author created. In Derelict, “I was able to apply an architectural style already developed to a carefully planned layout” says John. Both aspects combine well to provide Derelict a unique gamin experience. What level is not complete without ambience? The final piece to this masterful puzzle are the visual lighting effects and Quake 2 mechanical sounds which never seem to grow old.

As stated previously, and like many before Derelict is an example of “control chaos” around every corner. Derelict is small enough for 1 v 1 or up to six frenzied gamers, after which the level of gibbage would be uncontrollable. The weapon placement is spread though out the entire level. But in our testing sessions, it was the hyper blaster which was the weapon of choice. Or maybe just my bad luck that I could never get behind the weapon, but always in front of it. This weapon is positioned on the top level of the atrium, directly above the rocket launcher, needless to say, this become a very popular and congested area. The other area of note can be found in the opposite atrium near the rail gun. Located in the corner is a darkened hole. While it is not a secret corridor, is was often overlooked, as the megahealth rested at the end of the corridor above a flight of steps. A well timed rocket jump would also allow you access to this area.

Derelict is just another in a long line of quality levels which will never reach is full potential, but with site like PlanetQuake and Sven’s these levels are able to be recognized and continue to keep that Quake 2 torch lit. I foresee more of John’s levels being reviewed in the future. Enough is enough, this is a top notch level, one which deserves to reside on your hard drive. So for all you Quake 2 addicts, do the download and enjoy the thrills Derelict provides.