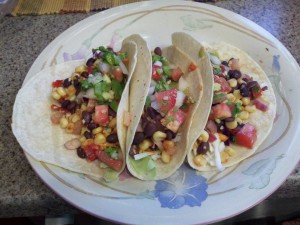 Directions:
In a pan add frozen corn and cook for 5-10 minutes. Add onion and garlic, continue to cook for 5 minutes. Add black beans and tomato. Mix together until warm. Serve in warm corn tortillas taco shells on a bed of cabbage and topped with pico de Gallo

Heat the over to 400 degrees. Fold corn tortillas in half and place them between the oven rack and heat for 10 minutes. This will give you a crispy taco shell. Fill shells with lettuce or cabbage, drip chipotle nayonaise and top with fresh pico de Gallo.

Notes: The other option for the corn is to roast 3 ears of corn on the BBQ, cut the corn off the corn and add it to the pan.

DIRECTIONS:
Preheat oven to 375°F. In a small bowl, combine flaxseed with almond milk and set aside to allow it to gel for 5 minutes.

In a large mixing bowl, stir applesauce and maple syrup together and add in flaxseed/almond milk mixture. Then sift in corn meal, oat flour, baking soda, baking powder, and salt. Stir until well-combined, but avoid over-mixing. Add in the corn kernels.

Finally I have some fresh new information for you to check out. First, comes the highly delayed review of Corn!! by Pablo Gil ‘eXKalibur’ Fernandez. While the map has a modest score, there are some real problem areas. Most notably the game play. The layout is very flat and one dimensional. Hopefully you find it interesting. If you don’t, keep reading, maybe I will have something else to interest you.

I have been in touch with BattleCow, who is currently working on improving the quality of his next level, Uptown which will debut in Urban Terror Beta 2. Here is just a sampling of what to expect: 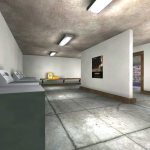 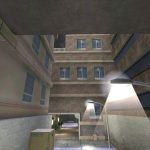 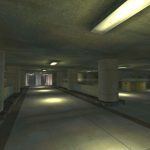 He has about 25 new shots which I will share over the course of the next few weeks. This level is look better and better every time I see it. Enjoy the new shots.

Did you happen to read this coop article by Hellchick titled Crosshairs: Counter-Strike alternatives-great taste, less cheating? I guess I was most interested by the final paragraphs:

And finally, for those of you with Quake III Arena there’s Urban Terror. Urban Terror is actually more like an Action Quake for Q3A than it is a Q3A version of Counter-Strike. The current beta 1 version has only two game types: team play and deathmatch. But already the programmers have implemented four new game types for beta 2, which will be coming soon: search and destroy (somewhat similar to Counter-Strike’s bomb-defusing scenario), tax collector (in which teams must be the first to grab the two piles of cash on the map), infiltrate (blow up the enemy base with some C4) and assassinate (a “protect the VIP” type of objective). Look for beta 2 in the coming weeks.

Thanks to Hellchick from dropping the p1mp hammer and giving Urban Terror props.

If you are interested, I was asked to give another interview. This is it was the Belgium web site, ShrimpWars 2.0. I met up with Sch3lp on IRC as he probed me for information. Check out the interview.

Every realism comparison you see these days is becoming a “Counter-Strike clone.” This term is beginning sound quite redundant. Why can’t gamers just accept the fact it was a great and highly successful mod? Why continue to bitch and complain about its shortcomings? No more than every gamers are realizing that the Half-Life engine is an “old” engine. Yet it is still a powerful enjoy to provide game play for a wide spectrum of computer systems. Not a day goes by, there is not a comparison made to CS. It does not matter if it is our mod, Navy Seals, Reaction Quake 3, Front Line Force, Infiltration….they are ALL compared. The horse is dead for Christsakes, quit beating the damn thing! Who should Urban Terror be compared to then? I believe we can be compared with those mods built on the Quake III engine, that is who? Navy Seals, True Combat, Reaction Quake 3 and countless other mods which are generating a fraction of the interest in realism mods for Quake III. The winner? That is not for me to choose. That will be up to the gaming community to decide. Partial? Me? Hell yes, I want to see Urban Terror do it. But that does not mean there will be others.

Greetings, again, the weekend is here and I am running behind. Spent about 8 hours yesterday with Netzwerk Terror, the local LAN in Redondo Beach, California. After the other games got some RA3 and Instagib out of the way, we got around to some Urban Terror goodness.

I introduced the maps Corn!! and ut-abbeybeta1-7 into the server this week. It was sink or swim. Abbey proved to be a great map. If you recall, this is the sequel level to Tub’s ut-village level. While there are a few annoyances in Abbey, Tub is aware of many of them, so by the time the map reaches Beta 2, it should be high quality and bug free. Corn!! was not as fortunate. Created by Pablo Gil “eXKalibuR” Fernández, the map is still visually impressive, but the game play was quite lacking. I think it lasted about 3 minutes and we moved onto a new level. Sorry eXKalibuR, maybe you should look into updating that level and providing a bit more in terms of game flow.

The main reason for the update tonight was to let you know I took my place atop the ‘Oswald Rant’ soapbox and pounded out an annoyance I see beginning to find its way in the Urban Terror community. While I would be blind to think that our community is perfect. For the most part gamers are good natured. But everyone once in awhile, the proverbial $#%@ hits the fan. Read the latest, Oswald Rant titled, Pass the Online Gaming, Please. If you feel different give me the bird and tell me to “STFU!!!”

By the way, did anyone happen to catch the inaugural kickoff of The XFL??? Just curious. I didn’t but would have liked to have seen some of its interesting rule changes from the NFL.