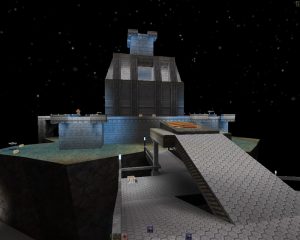 After going AWOL last week, the Quake 2 Level of the Week has returned to PlanetQuake with another “rising” review of the best levels available in the world of Quake 2. There seems to be a fairly dedicated group of level designers who insist on designing the best all around levels for Quake 2. Most of them toss around beta versions, ideas and valuable feedback to those in the Quake 2 mapping community. This week’s selection is a recent release from Shon “Maric” Shaffer called, Citadel which was release on April 13, 2001. Just in time for some Easter fragging!

What makes Citadel unique is the vertical component on which the layout was designed. “I made this one and gave up on it due to high r_speeds. I then remade it and gave it up due to long compile times. A friend, BadDog talked me into finishing this version.” The main focus on this level is a immense, concrete structure which rises into the starry night sky. The design is built around six different levels, each existing on a different horizontal plane. The Citadel itself has four different levels on which to occupy. The final two planes are the ground level on which the structure is constructed, including the two extended jump platforms and the lower suspended walkway which surrounds the depths of the Citadel.

To complement the layout, Maric broke away from the standard Quake 2, brown textures and decided to use those of [H F X] created by evil_lair. Using textures of this quality is what separates average maps from great maps. We always stress, layout and design, but this is a prime example of a map which would not look as impressive as it does, if Quake 2 texturing was applied. The texturing is a combination of greys, each with their own characteristics, which complement the next very well. The texturing really is brought to life by the cool and soothing white and blue light effects see throughout the entire level which creates an unparalleled ambience.

The level is brought to life by the addition of many ambient sounds. One which really casts an eerie sort of feeling is that which can be heard on the extended jump platforms. If you listen closely through the howling wind, [and when under heavy fire, you won’t stop to listen] it sounds as if hundreds of souls are crying out of those who used to occupy this fortress. A very interesting sound, which fits very nicely. There are also the standard complement of Quake 2 rumbling and mechanic sounds, which like the texturing gets monotonous, but still is better than no sound at all.

Citadel supports all of the Quake 2 weapons, items and power ups which are scattered around every part of this level. Some weapons to take note of, the grenade launcher which rests at the apex of the structure with multiple rounds available for you to reign down upon unsuspecting gamers. One level down, on opposite sides rest the BFG and Quad Damage, which seems to require little skill to obtain. Aside form these two weapons, everything else is quickly obtained. There is first aid and medkits, along with an assortment of stimpacks and armor shards which will help to health your injured body after talking massive damage. At the base of the citadel, positioned on each corner you will find a rocket launcher, chain gun, the mega health and red body armor.

Unable to get some real gamers to “ph34r my rail skillz,” I enlisted the support of the every so helpful bots for a demonstration of game play. Much of the attention focus around the two extended jump platforms, which allowed the bots to access the middle of the citadel and take comfort in the rail gun, for those who successfully made the jump to center of the citadel. Beneath these platforms, you gain a few weapons and some items. The teleporter transports you to the top of the citadel, where it seemed instead of getting telefragged, everyone seemed to get stuck on each other. I am unsure if that was a bot problem or a level design problem. Overall the game play was very tight. Designed for 1 v 1 deathmatch, the level is large enough to support 4 to 6 gamers comfortably. Then again, Quake 2 gaming is about being in your face, so the more, the merrier.

Like some of Maric’s previous levels, I have played and reviewed, this one does not disappoint. Definitely check Citadel out. Yet another wonderful level for the world of Quake 2, which seems to be turning out levels with a high degree of design, layout and playability. So head over to Maric’s Quake 2 Levels and grab Citadel.