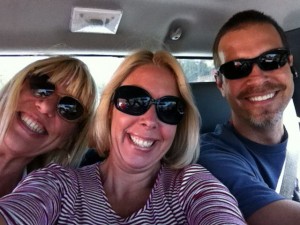 It has been months in the planning stages and previous attempts to make plans seemed to always fall through. Yesterday, my sister, who is a flight attendant and lives on the East Coast had a layover in San Francisco. She hopped BART and made her way to my office, where I met her. About 30 minutes later my aunt joined us. This was the first time my sister and aunt have met after about a year of talking together. What started as a reunion turned into a McDougall teaching moment.

After I got off work we made our way to Walnut Creek and ended up at Pyramid Alehouse. It was a beautiful day outside and we got a table outside and were welcomed by our server. After ordering a round of drinks, yeah I gave in and order a tall Pyramid Hefeweizen, my first alcoholic drink in nearly 3 weeks. I figured it was a treat since my sister, who I rarely get to see was in town. The girls order Grilled Avocado and Watermelon served with a salsa fresca and a Hefeweizen fire sauce. I opted for nothing to eat, but after seeing these plates when they arrived, I would have been compliant if I ordered this.

We got to talking and it turned to exercise and food and opened the door to a teaching moment. My sister has taken to doing mud runs and will participate in her first half marathon later this year in Las Vegas. Her training consists of kickboxing 3-5 times a week as well as running, continually increasing her distance. Unfortunately her eating habits were questionable, not unhealthy but in my opinion she was starving herself of food and much needed nutrients.

I give her kudos for tracking her food using My Fitness Pal on her iPhone, but the talked turned to how much she wasn’t eating. Many look at calories in versus calories out. Unfortunately the day she cited, she only ate 871 calories, but burned close to 1100. Then she explained what she ate during the day and while the food wasn’t unhealthy (by SAD standards) it was not enough and sounded to me like she was starving her body, but not seeing the results she had expected.

While I wasn’t pushing my extreme bias, I was trying to educate her on nutrition, as was my aunt, a former vegan. She, along with her husband have a few of carbohydrates, like many in the United States they believe carbohydrates makes people fat. I used myself as an example citing a 44 pound weight loss, much without any exercise, but basing my eating habits around starch, something as simple as the potato (sweet potato) or brown rice. Based on how she was eating, I would believe she is quite deficient in her RDA of nutrients, it’s difficult to see otherwise. The suggestion I made was to base her daily meals around the potato (she never has been a big rice fan) in order to fuel her body and give her that much needed energy for her workouts.

I dropped Dr. John McDougall’s name and offered her my copy of The McDougall Program. While she was open and receptive to it, she forgot to take the copy with her. Thankfully she will be back my way this week and hopefully I can get the book in her hand. Hopefully reading the first 3 chapters, especially Chapter 3: Food Facts: Common Dietary Myths Dispelled will get her thinking differently about how she fuels her body. I also recommended trying to cut out adding oil to her cooking. There was no mention made of giving up meat or seafood, but I did say limit consumption to 6 ounces.

Hopefully she (and her husband) can make some minor changes to their diet and see starch in a new light and not as something that needs to be avoided. It’s nearly August and making changes now will still give her 4 months to improve her times for her half marathon in December. She could easily drop 5-10 pounds and possible shave off time on her running and be in better health when she hits the starting line.

As I mentioned on Friday in my Eat on $3 a Day I have started tracking how much I eat daily. I started tracking my food on January 23 and now that I have 2 full weeks in I have some idea on how I am doing since changing my lifestyle, embracing Dr. John McDougall’s starch based diet. My main source of calories come from nearly 80% carbohydrates that constitute my diet.

Any early “myth” Dr. McDougall dispelled was that “starches make you fat.” A large potato gives you about 150 calories, a cup of rice approximately 200 calories. Compare that with two tablespoons of mayo at 200 calories or a cup of grated cheddar cheese at 450 calories. Do the math and see what you come with if you need to eat 2200 to 3000 calories a day. Potatoes are a great source of carbs, until you top them with sour cream, butter and bacon bits.

Looking over these past 2 weeks I have averaged 1657-1682 calories a day, much lower than what the suggested daily intake should be. Even with what I am eating I don’t go hungry during the day. Unfortunately I haven’t been able to get the carb intake up around 80%. February 2 I did have 73% carbs eaten that day, thanks to a Subway Veggie Delite sandwich and a serving and a half of potato enchiladas for dinner.

More notably than the carbs are the low fat intake, which were single digits the first 7 days I tracked my food, as I averaged 1682 total calories a day. The last 8 days have seen that number increase, but still been a percentage point or two around 10% total fat eaten. The exception being January 31 when my daily diet consisted of 17% fat. That was due in part to 4 whole wheat tortillas, that contain 3 grams of fat each.

Still I have been able to stay away from dairy, which has proved invaluable when it comes to keeping the total fat down. We have started to eat more potatoes than rice the past few weeks as well, now that I have found a new interest in the sweet potato, which I can with just about anything or even eat it plain.

For the period between January 23 to February 5 I am averaging 1648 calories a day. My total fat is at 9%, just under the 10% goal I am aiming for. Protein running a bit high at 14%, but I am not going to worry about that much. Eating fewer beans a week will drop that number significantly. As for total carbs I am only at 59%!

Over this time period I have lost about 1 pound, down to 189.5 as of this morning. That gives me a projected weight of 173 pounds by the end of my period. Not sure I want to drop down that low unless I am able to add some muscle to my frame, but eating a carb heavy diet has me seeing weight loss, not weight gain. Interesting once you starting reading up on nutrition and the details of why this is. I am very pleased with this trial period, but have felt great since changing my diet.