First off, I am not a homer for the game I helped design over the past 4 years called Urban Terror. What our development team achieved as amateurs, we consider a great accomplishment. Now for design studios out there who do this for a living…no wait, I know I am wasting my breath when it comes to the rights and wrongs or do’s and don’ts of game design. Hell, I don’t profess to know everything, if I did I would be a gaming guru like a Carmack, Meier or Molyneux (if I need to explain any of those, stop reading!).

The bottom line of ANY game development is money! How successful of a game can be created for as little as possible, while reaping a huge return on the initial investment? While I don’t follow the gaming industry as closely as I once did, I am appalled at what studios are churning out. Worse yet, gamers are buying this crap up!

Case in point, Battlefield 2 from Digital Illusions CE. *shakes head* First off, I am not much for sequel titles any longer because they rarely stack up to the original. Yes, even the Quake series! DICE, I thought would have been smart, I am sure their bottom line says they were smart and the bags of cash are rolling in.

After spending the better part of the five evenings playing this abortion called BF2, I can truly say it is not worth a second look. In order to give it a fair shake, I felt I had to give it a chance, so with the help Greg and Dan, brothers in Los Angeles I know, we played. We were fortunate to communicate, no not with the in-game communication system, but with Teamspeak 2. After getting their assistance initially, I was ready to rock and roll. Well, it was more like get rolled. Over and over and over again.

The game is short of balance when it comes to the assets you can use. I am not sure what is the worst offender, the artillery strikes or the jets. Guess it really makes no difference, but KILL (which they were intended to do) the game play! A well fought battle suddenly turns on a dime because of repeated strikes or jets dropping its loaded. “That is what they were created to do in the game, Oz!” Yeah, I know I have experienced it, over and over!

Now maybe I am spoiled by “other” games that actually allow players to move quickly across a level. If you have played “BS2” then you know just how large the fields of play are. They are extremely huge and complex levels with multitude of conquest points each team tries to control come hell or high water. So attempting to move between points without the use of vehicles is slow, challenging and often results in death.

Like other FPS games their movement system employees a stamina bar that moves rather quickly, based on sprinting or jumping. Regardless of your movement technique, stamina reduces. As for building it back up, walking or resting allow you to replenish your strength. This is why vehicles are the primary mode of transportation. Unfortunately on a server with 32, 48 or 60 gamers, your chances are rather slim to score some “heavy metal.” It goes without saying that most of the successful players I saw were flying jets (what a surprise!) and scoring near the tops of their respective teams.

These days in an ever changing industry where competition is stiff companies continue to ride their new titles based on their original concepts. Battlefield 1942 and its forerunner, Codename: Eagle were both great and enjoyable games. I do believe CE ended up as a bargin bin game rather quickly.

My point…pfft, I probably don’t have one. I think BF2 is garbage and thankfully I did not buy the game, nor after playing on my wife’s computer would I consider buying this game. I don’t see why all of a sudden it is “nuevo” to play on a server with 64 other gamers. But, if you enjoy this sort of gaming, great. You have just helped some big conglomerate, like an EA stuff their pockets full of more money.

Oh, and if you wanted to know WHY I actually played the game. It was not because of the game itself, it was because of the guys I am friends with, they were the ones who made the game bearable, or borderline enjoyable.

As I posted in Gaming Gone Bad last week, I have really been turned off by the current run of retail games available. Maybe that just goes to provide companie are churning our crap as retail sales for November fell 9% or $1.3 billion. That decline attributed to consumers waiting and saving for Xbox 360 (source: Reuters). Honestly, I don’t buy it, you can spin statistics any which way you want, but this article not about about sagging sales or poor video games on the market this holiday season. 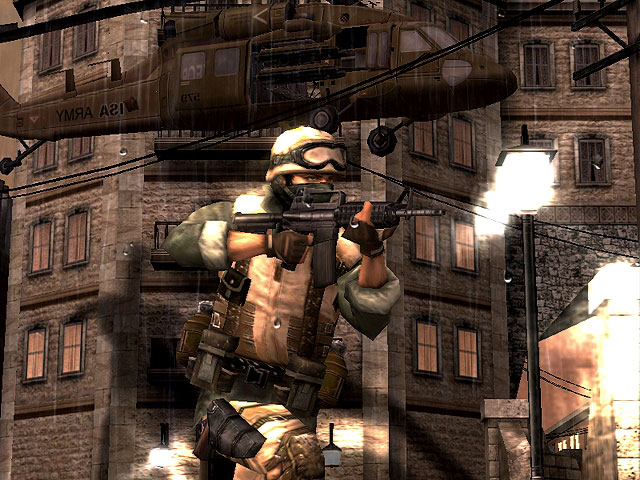 Would you believe I am actually going to give props to a game I was turned onto yesterday by Gerhard (aka Wolfseye) who manages the gaming web site, Act of War. The game looks and feels a bit like Digitial Illusions CE latest offering, Battlefield 2. Now, I am not a big BF2 fan, I think the game is “just another” war based genre game that adds to an already over saturated market. Their previous work on Battlefield 1942, and its predecessor, Codename: Eagle were by far better products and more original.

Gerhard tells me to grab a “free” game (registration required) called WarRock. which just so happens to have strong similarities to BF2. Seeing that it is free and will play on Windows 2000, I downloaded, installed and gave it a test drive. First impressions had be giving it the nod of approval. The game is currently being developed by DREAMexecution, a Seoul, Korea based company. The game is run off their proprietary game engine called the Jindo Engine.