Preach patience. Don’t knee jerk. Save your chips. None of this sage advice was followed hours before the Friday kickoff of West Ham hosting Brighton. All the Man City talk, the return of Morata and big attacking returns had me seeing points pouring in Gameweek 9. Unfortunately, Pep struck, defenders didn’t deliver and not surprisingly, Harry Kane delivered a season high at home. It all equated to my worst point total of the season and knocked me 600k down the overall rankings.

On the back of two successive green arrows, I should have used my own advice and practiced patience. In fact hours before Friday’s fixture I was inclined to roll the transfer and double dip ahead of GW10. Twitter and pundits I follow got the better of me and in a moment of madness I activated the Free Hit Chip. 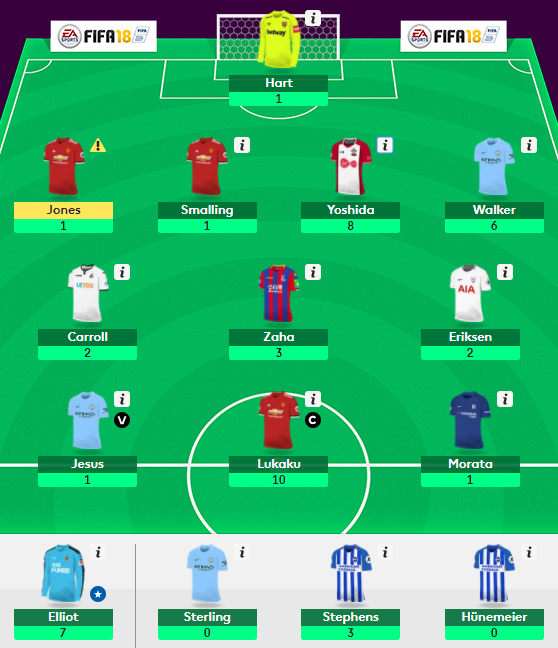 All the talk leading up the the gameweek had centered on the play of Man City, the attack (without Aguero) had been lethal. The play of Silva, De Bruyne, Sterling, Sane, Jesus, Otamendi and to a lesser extent, Walker had been posting great points in the past 6 weeks. Maybe I was lulled into a false sense of security, forgetting Pep’s penchant for rotation, because it hit big for Gameweek 9 as Jesus and Sterling were both left out of the starting XI.

Put bluntly, the Free Hit Chip failed. UP front, I went with the popular Twitter selections of Jesus, Lukaku and Morata, all who had good match ups. As mentioned, Jesus failed to see the pitch, Morata was pulled in favor of Batshuayi after 60 minutes and Lukaku blanked for his second game in a row. I will be thankful he picked up an assist, coupled with the armband he scored 10 points. Well off the pace of Kane’s 16 points.

With Sterling not starting or featuring, Tom Carroll was substituted and he was no better than my other two starters, Zaha and Eriksen who netted 5 points. Both players were coming off spectacular games the previous weeks, but failed to produce this gameweek.

Defensively, my week was foreshadowed by Joe Hart failing to keep his previous 4-week form, conceding 3 goals to Brighton. Doubling up on Jones, who exited after 22 minutes and Smalling, didn’t help as Man United failed to keep a CS, only the second time in the last 7 games. One bright spot was Maya Yoshida with a CS and 2 bonus points, he continues to post solid numbers for the So’ton defense. Kyle Walker kept it clean as well for another 6 points.

At weekend’s end, it was just 36 points, on a week that averaged 50 points. I lose nearly 600k spots, falling to 1.1m on 476 overall points. Thankfully my team has reverted back to  my GW8 lineup and while I continue to have some problems with my squad I will be looking to make some changes. If I would have heeded my own advice, I would have scored 58 points, on the back of Kane and his 16 point performance (most likely captained). 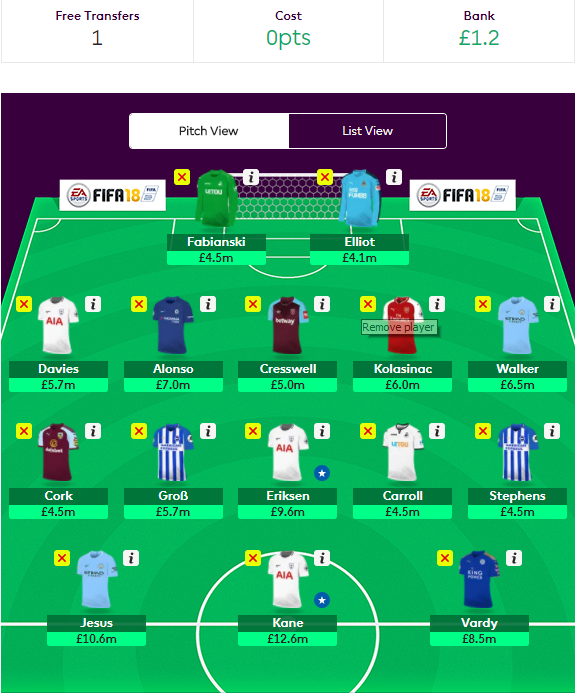 One thing is for certain, Harry Kane will be locked every weekend and captained from this gameweek out. His performance against Liverpool should have been expected based on previous performances at Wembley, the fact his underlying numbers have been very strong, but no returns to Burnley, Swansea and Bournemouth had me questioning the star forward. Those thoughts are now erased and he’s now a template starter for me.

While I didn’t use my GW9 advice, I am not going to make any rage transfers before Friday. Ben Davies is my biggest concern at the moment, for the second week in a row, he missed out on a fixture. Other concerns with my 5-man defense, the lack of output from 7.0M, Marcos Alonso. No returns since Chelsea’s last CS in GW5 and no goals or attacking returns since GW2, currently being outplayed by “Dave.” Kolansinac is another big wingback I was banking on for offensive returns, but the fact Alexis Sanchez plays on the left has Sead limited in his advances forward. At just 2 assists on the season, his 6.0m price tag is becoming unsustainable.

The midfield will be dependent on what I do with my 3-forward set. Vardy hasn’t been the answer, no returns in the last 4 games. Firmino had fallen out of favor for Liverpool with no returns in 6 weeks I can’t see him in my starting XI. Alvaro Morata was on my shortlist, for this week, but introduced him a week sooner. The result didn’t work out in my favor, but he’s still near the top of my list as Chelsea has great fixtures through GW21. Then there is Jesus. Jesus, what do I do with Jesus? We know Jesus and Aguero will have games in which they don’t play or feature off the bench. Are there enough points to shell out 10.5m or 11.6m for players who may not feature every game for 90 minutes? Looking like Silva and KDB are the only reliable attacking players.

Finally, my 2-man midfield, which I was high on 2 weeks ago and actually Pascal Groß is still in favor with another 6 point return in GW9. I don’t plan on moving Eriksen either, calling him “fixture proof,” this coming off a blank against Liverpool in which he featured in a deeper roll with Alli and Son playing the advanced positions. I don’t believe this will be the norm for Spurs and their attack.

As for the #5mandefence, my 5-2-3 formation might be coming to an end. As we have seen leading up to this week, the wing backs just aren’t producing, which has me looking at retaining a 5-man defense, but moving a forward to the midfield and running with a 5-3-2 with the introduction of Richarlison. Don’t want to jump the gun too early, so I will see how this week plays out before making necessary changes.