Prior to starting the installation after the spreaders were measured and tied off, the spool of wire needed to be cut for each of the 5 bands. There were three pieces of wire required per band, two for the driven element and once for the reflector. These would be connected to the coax feeder mounted on the center post and a piece of Dacron rope would be tied between the two elements to comprise each band. 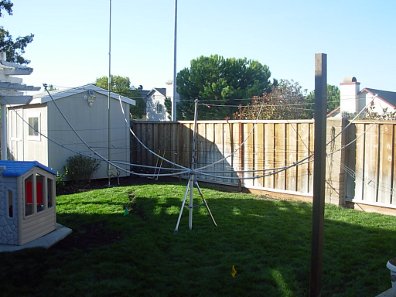 With all the initial hardware in place, it was time to bend each spreader up and tie them off on each end. Once the spreaders were bent up the full diameter of the hex beam would be a shade over 22′. It sure seemed larger in my small backyard. Once the wires were cut and run through the wire guides ring terminals were added to each end of the driven and reflector elements. At this point, starting with 20 meters and working in, towards the hub each driven element was connected to the coax feeder on the center post.

After all 5 bands were added it was time to go back and make each band taut. In my case 20 meters was sagging badly, while 17 meters did not seem long enough. I confirmed measurements of each element and the element spacer (Dacron rope). All my measurements were correct. As per the manual, “Final leveling and slight tension on the wires is accomplished by small, equal adjustments of the wire guide stud clamp positions on the spreaders away from the center of the antenna.” 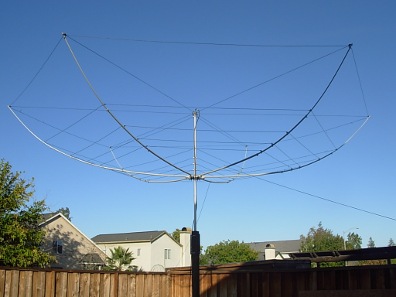 While the final position of the hex beam will be on top of a Rohn H50, which will be mounted to a pressure treated 4×4 that is set in concrete, 2 feet deep (8 feet high). Using a vertical mount from DXE I rigged up short piece of mast in which I slide the hex beam over for a current overall height of about 15′.