“And as someone who has been in that locker room and has sat next to the players, we agree with the supporter group American Outlaws: We believe that we will win.”

Wow! What happens when you get cut and don’t get to travel to Brazil to participate in the 2014 World Cup? You speak up and disagree with the manager who believe they can’t win the World Cup because they are not at that level. I have never been a Landon Donovan supporter, in fact never saw him as a very prolific footballer, outside of the US. I am sure he, like the US Men’s Soccer Team have fans, but I am not one of them. Yet for him to take a position with ESPN on the eve of kickoff for the World Cup is laughable.

How many times are we going to have to hear about his sob story about he should be on the pitch with teammates instead of “breaking it down” as most former US (men and women) end up doing in the studio when the World Cup rolls around.

Even as an American, I don’t believe in the US winning ANY games. Yet Donovan says, “We believe that we will win…I think that’s the way Americans think and I think that’s the sentiment.” No, I disagree it’s not how I think. Taking a realistic approach, how does the US have the talent or skill to compete on the world stage? They don’t and history has proved this, as prior to 1986 the last time the US qualified for the World Cup was 1950. Since 1986 the US has only progressed to the quarterfinals once, in 2002. Based on past results, the US won’t move out of the group stage and have never won a World Cup, but many teams can claim that.

So Landon, have a slice of humble pie and keep your biased opinions off my World Cup broadcast. It’s the American “has-beens” who attempt to provide insight to the world game that cause a lot of head shaking when it comes to their opinions of how the world game is played. At age 32, your best playing days are behind you, time to face up to that fact. Oh and by the way, the US won’t win the World Cup this year in Brazil. Let’s set the record straight before kickoff.

We cannot win the World Cup because we are not at that level yet.

Gotta love these brutal assessments, but he’s got it spot on. The US will be lucky to secure a single win in the group stage, partnered with Germany, Portugal and Ghama in Group G. The US will never be at the level to truly compete on the international stage, especially if homegrown talent plays in the MLS. Unfortunately many US players who play abroad, either play in the lower divisions or lac the necessary talent to secure a starting XI spot. So enjoy Brazil for 30 days and see how the beautiful game is really played.

The problem is that many women and children already consume enough potatoes and not enough of the nutrient-dense fruits and vegetables they need.

Is Michelle Obama really that uneducated when it comes to nutrition? How can she claim that too many potatoes are being consumed by women and children? Cite some sources for me please. Maybe I should introduce you to Dr. John McDougall, who would not agree with your statement. I think it’s a great idea to include potatoes in the WIC program. Potatoes do not make you fat. Eating potatoes prepared in oil or slathered with butter will lead you down the road to obesity. All it takes is a bit of education when it comes to nutrition and you can learn what you should be eating. Don’t hate the potato. “This conflict over the potato shows how backwards ideas can become when money is at stake” (source). 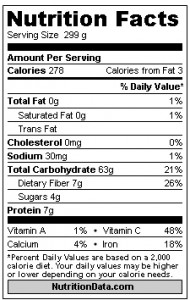 It’s unfortunate that misinformation and myths continue to make media headlines. Many Americans rely on meat for protein and dairy for calcium, while potatoes are nothing but empty calories and fattening. The potato has been a staple of civilizations, first being cultivated in South America as far back as 13,000 years ago. Spanish conquistadors brought the potato back to Spain in 1570, where it slowly spread through out Europe. “The most dramatic example of the potato’s potential to alter population patterns occurred in Ireland, where the potato had become a staple by 1800. The Irish population doubled to eight million between 1780 and 1841 — this, without any significant expansion of industry or reform of agricultural techniques beyond the widespread cultivation of the potato” (source).

-Jeff Sekerak from Confessions of a Super-Fit Vegan

Following up on yesterday’s Journey to Greatness story, Jeff Sekerak continues to inspire me as I read more of his story. Last year was an introduction to exercise, this year I full the promise I have made to myself to improve my overall health, conditioning and appearance.

“Splurging is the key to life…How would you appreciate vegetables if you never had chocolate? You couldn’t live without a little chocolate, a little French fries…I still splurge when I can, but that’s why I try to exercise almost every day.”

What a poor message being communicated to Americans by the first lady, Michelle Obama and her Let’s Move! program at the annual White House egg roll event. This quote, by an overweight mother of two is along the same lines of “everything in moderation is okay.” As Jeff Novick, MS, RD says, “items we know that are causing harm to Americans right now are the excess consumption of added sugars, refined grains, sodium, fat, and saturated fat.” The numbers don’t lie and I have written about this previously, people are moderating the WRONG foods. Yet splurging is just another word for moderation and not a good message to be sending when heading up an expensive government program.

Someone also needs to tell Mrs. Obama that nutrition and eating right, not exercise is key to life. Many Americans still don’t understand nutrition and the roll it plays in their life and health. Many will claim to be healthy based on how they look or their weight, but what do the blood results show? Exercise is important, but one must take control of what and how they eat before they imagine eating anything and splurging are okay, as long as you are exercising.