Out of my love and enjoyment of shoutcasting (see last week’s Flashback Friday) I had the opportunity to develop my own online radio show that was not centered around online computer gaming. In 2005, after making the switch from TsN, the Team Sportcast Network to Radio iTG (Inside the Game), management decided to add alternative online program to our gaming schedule. At this time, coverage consisted of Counter Strike, Return to Castle Wolfenstein, Call of Duty, Quake III Arena, Urban Terror and Starcraft, just to name a few. The online personalities each came up with their own, unique program. My show was called Just Push Play (JPP), as I flashed back to the 1980’s!

Originally my show debuted a few years earlier preceding Blankz and his late night antics on Anything Goes. A deal was struck with Blankz and Radio Oz was introduced, a 2-hour all request 80’s radio show. Unlike JPP, there was very little on air conversation, as I let the music do the talking. Using IRC, I would take requests and do my communicating in the IRC channel. This worked well, as I was able to get some experience with a live listening audience, but I wanted something more.

When the opportunity came around, I did not hesitate. With endless ideas and a large collection of 80’s MP3s, Just Push Play took to the air on January 26, 2005. Episode 001 was challenging, wanting to come off as a professional production and not sound like a tool. Listening now to the first episode is hard but it was a learning experience and the second episode on February 02 was a hit (download and listen).

The two hour show featured lots of 80’s music, as well as segments that included; Pop Culture, Boob Tube, Flick Pick and Album Rewind. I had also planned a Button Bashers segment. Pop Culture took look at toys, video games, nostalgia, fads and fashion. This was sort of a catch all segment. Boob Tube talked about some of the classic, action television shows we remembered. Flick Pick dealt with movies that were playing on the big screen during the 1980s. The most iconic segment, Album Rewind took a closer look at classic albums of the 80s. when vinyl still existed. The Button Bashers segment never materialized, which was to feature the best local arcades had to offer in video games. Unfortunately, the station ran into hard times and I was never able to get this segment introduced before the station had their plug pulled. 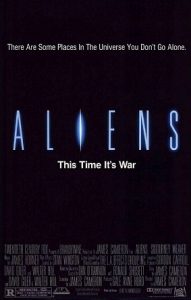 Episode 002 was one of my favorite episodes, not that is the best produced show, but the content made this a favorite out of all the episodes I recorded. The music was all one-hit wonders including Tommy Tutone, Dexy’s Midnight Runners, Rockwell and Taco. Pop culture featured a few toys from my childhood, the Milton Bradley Big Trax, something I never did own as well as the Choose Your Own Adventure Books published by Bantam Books. Surprisingly enough, I just picked up a few of these books for my son and they are still a great read, just when I flipping pages back in the early 80s.

It could be said that many of those tuned into Just Push Play had no idea what I was talking about. Thankfully our listeners were quite diverse and many knew the music and movies, but the pop culture and TV shows seemed to fall by the wayside, unless you happened to be turned in to your weekly favorites. DVRs did not exist and VCRs were not affordable.

The Boob Tube segment featured one of my favorite shows 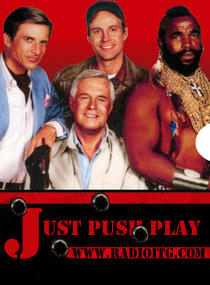 as a youth, The A-Team. “If you have a problem, if no one else can help, and if you can find them, maybe you can hire the A-Team.” An American action-adventure television series that ran on NBC from 1983 to 1987 about members of a fictitious former United States Army Special Forces unit. The members, after being court-martialed “for a crime they didn’t commit”, escaped from military prison and, while still on the run, worked as soldiers of fortune (wiki).

On the big screen it was the 1986 sci-fi thriller, Aliens. James Cameron’s sequel to Ridley Scott’s 1979 sci-fi horror film, Alien. The film followed Sigourney Weaver’s character, Ellen Ripley, who was found floating in space, as she returns to the planet where her crew first encountered the alien. The film grossed $180 million worldwide and was nominated for seven Academy Awards. Still one of the top 10 science fiction movies of the 80s and based on Rotten Tomatoes, ranked 31 in their Top 100 Science Fiction & Fantasy. 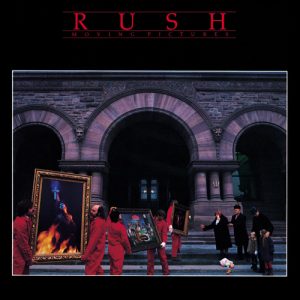 The final segment, Album Rewind featured Rush and their undisputed best, all-time album, the 1981 classic, Moving Pictures. The album became the band’s highest selling  album in the United States, peaking at #3 on the Billboard 200, was also the first to be certified multi-platinum by the RIAA. Moving Pictures includes some of the most influential rock written by the group including Tom Sawyer, Red Barchetta, YYZ and Limelight. All timeless classics that still rock your ass 35 years later.

Through out the show, during my breaks I would play music associated with the theme of the show. Episode 002 was ‘one hit wonders’ and included Dexy’s Midnight Runners with Come on Eileen, Taco, Puttin’ on the Ritz, Michael Damian with Rock On, Falco sand Der Kommissar, Eddie Grant took a walk down Electric Avenue while Wall of Voodoo went south of the border with Mexican Radio, Red Ryder sang about the Lunatic Fringe and Tommy Tutone with 837-6309/Jenny. These songs and more rounded out the shows for the week.

All in all Just Push Play was a great way to flash back to the 1980s and remember how good we had it. It was a passion providing my listening audience the things that made the 80s great and memorable in my mind. Over the run on-air I received many accolades and requests from listeners who heard the show live, as well as those who downloaded the MP3 after the fact. While the show will never return and I won’t grace the microphone, I can still flask back with Just Push Play.

Starting in 1999 I became an avid gamer while living in Chicago with a roommate who introduced me to the PC game, Quake II. The rest, as they say is history. Never in my wildest imaginations did I think I would find so much enjoyment, meet gamers, developers and friends from all walks of line brought together because of video games, which has become a culture. In 2000 on an invite from id Software attended my first LAN event, QuakeCon as an amateur developer for Silicon Ice Development, the team behind the Quake 3 modification, Urban Terror.

Since that time and experience my online persona, Oswald or Oz, was taken in many different directions, but one thing remained constant. Video games were the central focus. Looking back years later on what I accomplished, makes me wonder what could have been. Riding a wave of success in 2000, our first meeting with Activision, on the heels of QuakeCon didn’t quite go as planned, but it could have changed my life. 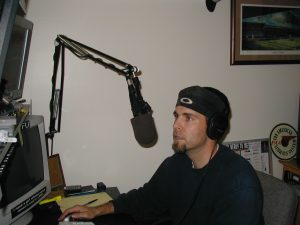 Running the development team as a project coordinator and promoting the game as public relations, I met with some interesting opportunities. Trips to Boston, Colorado Springs, Irvine and Los Angeles were just some of the requests as part of an online community known as shoutcasters. As defined by Liquipedia, “a caster is a person dedicated to the broadcasting side of esports, providing commentary for games. Casters often double as hosts for tournaments, conducting interviews and player introductions among other things.” Over nearly 10 years I worked with two online stations, TsN, the Team Sportscast Network and Radio iTG or Inside the Game. Both featured some of the same personalities and brought video games to life through their knowledge and coverage.

While this was the next step, it was an unknown personality (to me) named, Blankz aka “DJ Too Pimp For You,” who interviewedme in May, 2001, while part of Silicon Ice Development that got me interested in shoutcasting. It wasn’t long after the interview that I preempted Anything Goes with my own 80’s radio show called Radio Oz. It was really nothing more than playing tunes on request from the 80’s. Very little talk or conversation but that all changed.

Radio Oz as it was know morphed into Urban Radio, which debuted on December 21, 2001, which featured music and information on the game Urban Terror. While not at the apex of development, the radio show was a success with the online community. The two hour show was written and produced by myself each week through 2008 and featured prominently during release cycles that brought new game files to the Urban Terror community. This took support to the next level and broadened my horizon as a shoutcaster.

On May 7, 2002 I began providing commentary and coverage for ClanBase, one of Europe’s largest and most respected gaming leagues. Coverage began with Urban Terror, which my was expertise providing Open Cup, Nations Cup and ladder based gaming. Along with CB I provided limited coverage of CAL, FMFS, OGL, STA and TWL but my first love was European coverage.

With a falling out at TsN, I followed a small group of devoted casters who built a new station, Radio iTG or Inside the Game. The format was similar, associated with specific online gaming leagues and LAN events, but the format wasn’t all games, all the time. We were able to expand and do individual shows, Just Push Play was born.

You can now view the online archives and download any show.