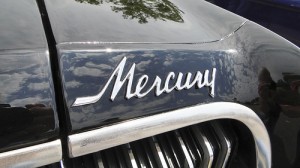 It’s time to dust off the ’68 Cougar category. It’s been a bit over 2 years since I last visited this topic. Money is the one thing you need when you are restoring a classic cat. While I am not intending my car to be show quality, it will be consider a complete restoration. Along with money, which I am not putting towards the cat, is time. With my family responsibilities, going to work, the gym and other priorities, spending a few hours during my day off working on the car has been non-existent.

I walked across the street to see how my neighbor was coming on his 50-something Chevy. Needless to say he has made great progress in the last few years on the body and much of the undercarriage. While I am sure I have more pressing priorities, I might actually try to finish up the engine compartment and get the engine on its mounts in the next few months. At this time, the compartment is nearly stripped and I was looking to spray a rubberized undercoating on it before dropping the engine in.

There are quite a few other tasks that need to be accomplished in the engine compartment before I could install the engine. With a few days to myself, as my wife and son are on vacation, I might roll the Cougar backwards tomorrow and put some time into the restoration. It’s hard to believe I have dropped over $15,000 into this car and it’s nowhere near drivable.

At this point I think it’s a matter of taking inventory on the parts I have and get to work on those items I can. Drivable looking like a clunker is fine with me. Some might actually call it a “sleeper” but we will see. with any luck I can put a solid day of work into the Cougar tomorrow.

Wow! A news post about my ’68 Mercury Cougar. It has been some time since I have really commented on this “project” that takes up the entire two car garage. Needless to say, my wife is less than thrilled to see this continue to occupy space her 2009 Dodge Charger could be parked in. Over the past few months I have considered selling this project. Unfortunately, the down economy has seen a downward trend in the price of restored vehicles. Mine is nowhere near restored, nor is it drivable. With that said, a good portion of the mechanical work has already been completed. I guess I have something going for me, rather than a true pile of shit sitting in the garage.

The car was really just given to me back in 2004 when a friend of my girlfriend (now wife) at the time made mention he needed to get rid of his 1986 Cougar before it was towed. Splitting time between SoCal and NoCal I decided to take ownership of the car and made the trip to Santa Rosa to pick it up. It was not bad looking, some rust from the missing vinyl top a few minor dents, but structurally, the Cougar was a true find. It cost me nothing more than title and transfer at the DMV.

Since taking ownership I have spent A LOT of money on this car, to the point I could have easily bought a very nice 1970 Cougar Eliminator. Okay, maybe that would be a bit of a stretch, but I know I could have bought a fully restored Cougar. I decided to tackle this project, knowing close to nothing about restoring a car such as this. It has been a learning experience as I go along. I also knew as I got older my son could take an interest into restoring the Cougar with me

Let me get this back on topic as I could easily get sidetracked. Over the last few months I have thought about selling this project. I know i won’t get what I have put in to it, you never do. As I said major components of the Cougar are already done, including the engine, front and rear end rebuild, new brakes all around, a new drive shaft, rebuilt transmission and an all new exhaust. Do the math, you will have some idea what the bill comes to.

Getting back into amateur radio, coupled with the growth of my son and the rigors of work, time is something I don’t have much of these days. This is one factor leading to my potential decision to sell the project. I have received many comments from other cat enthusiasts to “put an hour in a day and work on it.” While great information, I don’t have 60 minutes to dedicate to the Cougar at this time. Couple with the fact that whatever price I got for the Cougar (and or parts) could be applied to outstanding debt that seems to plague many in America today.

While selling the Cougar is not a long term solution to my short term problems it would help. Most importantly it would please the wife that the Cougar was out of the garage. It would give us some more room in the garage, it would payoff some debt, allowing more of the paycheck to be stashed in a savings account. Conversely, I could look back on this decision and wonder how I could do something so stupid selling this car in it’s current state. I still reflect on my decision to sell my initial baseball card collection I took with me to BYU. Some $3000 worth of cards netted me about $1000 for a new GT Avalanche mountain bike.

So I now stand at the crossroads, which road I take is not yet known. I will continue to weight my options and hopefully come to a decision soon. Now that summer is rolling around and my son, now 4 years old is a bit more responsible I might be able to dedicate some time on my weekly days off to doing something on the Cougar. Time is only part of the problem, money is the other. Everything I need to do costs money. I guess I could always start reading about bodywork and make an attempt to straighten the dents and imperfections in the Cougar, since that is the next step in the restoration process.

No, not tanked as in too much beer, although the beer tool was involved, I was able to spend a few hours today on the back end of the Cougar. I pulled the tail lights and bumper and started some general cleaning. The inside of the trunk is coming along, albeit slowly. I was skimming though Mercury Cougar Forums looking for alternate ways to clean and insulate the trunk.

After a few minutes of searching I was able to come up with a few ideas, including insulation from Jegs, using spray adhesive or insulation from one of the big box stores. I stopped by Lowe’s today and did not see anything I could use for insulation. Think I’ll spend the extra money and order from Jegs or Summit, if I go that route.

I found the trunk kit that will be laid after the trunk is complete. Of course this is a long way off since I am still pulling parts off the car in order to prep it for bodywork and paint. Not really quite sure of the details, the when and where. But surfing the net and talking to other car enthusiasts my ballpark figure for the bodywork and paint should come close.

Nonetheless it was nice to finish the house chores (aka honey do list) and spend a few minutes doing some minor work on the cat.

Recently…well, the past few years I have not had much free time at all while home on my days off. Thankfully, it turned out a strong odor from the Cougar’s fuel tank allowed me some play time with the kitty. This was on my to do list anyway, but the continued frown from the wife played into my decision to drop the tank.

It was relatively easy…that is once I was able to siphon the fuel from the tank. Let me tell you, unleaded regular tastes like shit! The fumes were even worse, but I was able to lower the level enough, and removed all the screws holding the tank and lifted it out without a problem.

Taking a look at Mustangs Unlimited I can buy a replacement 16 gallon tank with drain plug and sending unit for $114.99. Of course being over sized, it will cost a bit more money to ship it, but well worth the price. Now that the tank it out a piece of plywood sits, covering the hole. I might even start cleaning out the trunk and prepping it to shoot it with some sort of coating. 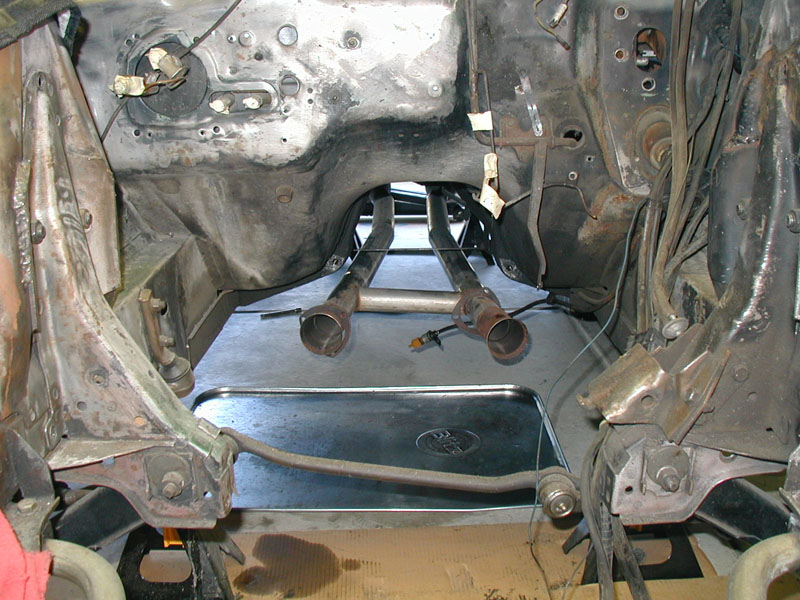 Would you believe I actually got time  today with my Cougar? Hard to believe, but I did not really feel like  working on the yard, so I put a few hours in and ended up pulling the C4  transmission. This is the first real work I have put into the Cougar in  probably 6-8 months. Not because I lost the desire, but because of  training and family commitments the time was just not there. Don’t even  ask how poorly I have maintained our Cougar club web site.?This  was the last major mechanical piece I needed to remove if I have any  intentions of getting it painted later this year, which I do. The  transmission is rebuilt, with a new drive shift. After dropping the two  u-bolts on the read axle I muscled up and slide the drive shaft out of  the transmission. I thought I had poured out all the transmission fluid,  well I was wrong. 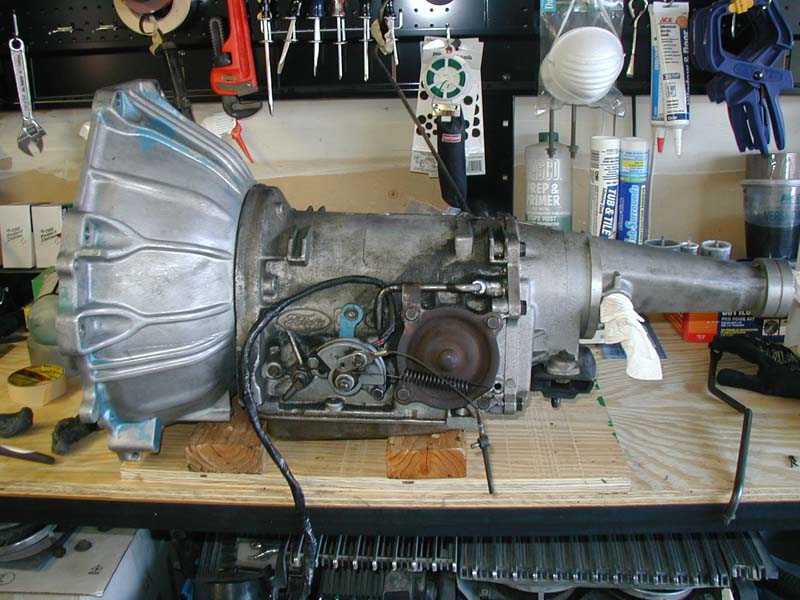 I started to unbolt the last few remaining  bolts and hooked the bell housing up to a cherry picker, just to help me  out here. As I raise the front of the transmission, a river of  transparent red began to flow…onto the garage floor. So, while it was  the not most professional of removals, I did get it out of the car and  now have more room under the car in order to clean the undercarriage and  recoat it. I plan on cleaning up the transmission, repainting the bell  housing and replacing any parts that might need it before bolting to the  engine and dropping both into the car after it is painted.