It was my intention this year to make each room unique and improve on what I had done the previous 3 years. Many of the guests (students) had some expectations when they neared the entrance of the haunt. Unlike the past few years, I was attempting to use as little budget as possible to put together the rooms that would make up the haunt. Can’t say I succeeded on that task as I found myself buying plywood, PVC, visqueen and paint in order to bring to life my ideas.

The past few years, some of the rooms were rather stale and failed in my opinion with very little to offer, just taking up space on the stage. While I started out with time on my side, I was without help for nearly the entire month, which left me to plan, build and decorate the haunt. Thanks to some of the gals on the PTA, as well as my realtor and an experienced electrician/handyman, we were able to get everything done in order to bring the haunt alive at Vintage Parkway. 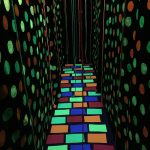 Mystical Walkway/Hall of Faces: Pinterest was used as a reference this year for numerous rooms in the haunt. This included the first hallway, which was 3′ wide by 16′ long, making it quite a narrow feature in the haunt. On the floor was 3′ wide heavy duty , brown contractor paper. This was taped down to the carpet and on top of the brown background I had cut 8.5″x 11″ colored paper in half and spray glued them down  alternating each color. Hung on the walls were the black sheets with colored dots I had used the previous 2 years. Hung across the hallway were PVC pipe spray painted black and colored rope was hung. The overall effect with the black light was one of the best I had created in 4 years. I was very pleased with this room! The only problem, the weather didn’t cooperate, it rained and as the night wore on, the paper disintegrated due to all the wet feet walking down the hallway. 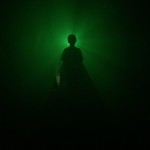 Laser Vortex: One of my new found favorite experiences in the haunt, which was introduced last year. It was one of the simplest rooms put together, as fog was blown into the hallway, using a fan. A small, high powered, green laser was attached to a battery pack, which shined on a rotating piece of wood on an old fan. This set up created a circular pattern, which fanned out as if you were walking into a vortex. The effect was creepy, but very cool looking. While I would like to say I pulled it off this year, I didn’t. The “help” I had was “tired of standing and bored” and decided to leave his position in the haunt, which left nothing more than a green laser rotating for most of the night. Compounded by this was the fact the Principal didn’t like the fact the hallway was foggy and dark, to the point she worried about the safety of the kids. Guides were told to shine their flashlights, which killed the experience of the vortex. 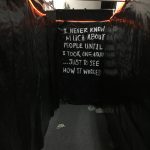 Body Bag Hallway: This hallway really was nothing more than a transition hallway to get guests back toward the next haunt. I had big plans for this hallway, after viewing some great images on Pinterest of clear plastic body bags with bloody body (clothes) hanging from the ceiling. The effect was very chilling and eerie. Unfortunately I used black plastic bags because I didn’t have enough clothes to bloody. I also had a very difficult time getting someone to put similar dead bodies together, built out of nothing more than newspaper and tape. It took until the final week leading up to the haunt, but I got my bodies hung in the hallway. Located at the end of the hallway was Twitchy the Clown and the words, “I never knew much about people until I took one apart…just to see how it worked.” 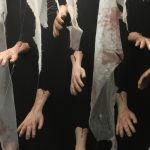 Helping Hands: This was used in similar fashion last year as another transition type haunt leading to the next area (drop panels). It was left, right zig-zagged hallway this year, very short, two 4′ sections with bloodied, plastic hands screwed into the walls. I had intentions of putting kids behind the wall again this year, but after watching it fail last year, I really wasn’t too inclined to attempt it again. If done properly, it would have been a great scare. What I wish I could have used was more wood planks on the wall to create a better hallway effect. I did bring back the thin vail of cloth that hung from the ceiling with two red lights shining down on the area. Effectively bridged the body bag hallway and the drop panels. 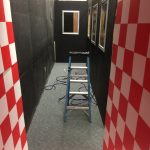 Drop Panels: By far the centerpiece of our haunt the last 2 years. I am so glad Mark and I built these two drop panels, as it produced the best scares through the night. Usually positioned across from each other, I decided to place the drop panels on walls perpendicular to each other. My only problem, having actors see guests to activate the drop panels. The idea this year was to use mirrors, unfortunately, their placement would be too high on the way and I could not get up that high to secure them. My next idea was to bring back the video camera idea, unfortunately being a dark hallway, we had issues seeing people on the remote screens. In the end, we drilled a few holes in the wall, large enough to look out and the actors used those to time the drop panels. The only other failure this year was not putting 5mm plywood on the opposite wall and building simple picture frames to heighten the hallway experience. Instead I hung plastic, which did nothing but fall down through out the night. 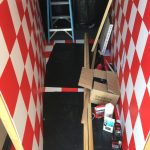 Checkboard Room: This was a Pinterest addition to the haunt this year. I loved how it looked on the reference image I used and would be perfect for Mark to occupy. It took more time than I expected to paint and put together but worked very well in conjunction with the drop panel hallway and Jerk Face’s room, which was the following room. Used as a false exit, Mark, dressed as a clown stood deep in the hallway and waited for guests to walk into the red and white checkerboard. The catch, his clothing matched, so he blended into the hallway. Some of the best screams of the night came from this simple dead end structure. 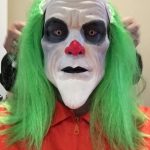 JerkFace the Clown: This was the final haunt before exiting and was nothing more than a large, open room with stripes of plastic hung every foot through out the entire room. It required guests to “swim” with their arms out in front to find the way out. The only lighting was flashing strobe lights. In this room, your friendly clown, JerkFace. We know many people fear clowns and his inclusion in the room made it into a screamfest! It was one best time I had in the haunt, dresssed as a clown, thanks to the hard work on the latex, makeup and hair my wife did.