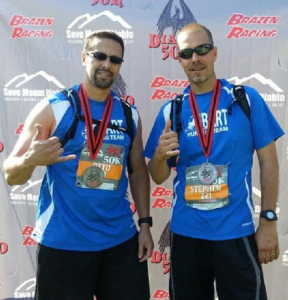 This is the health I want to recapture from 2014. Trim, fit and healthy. Smiling after my first 50k finish with Otto.

Now 2 weeks in I get to look back on what has transpired since jumping into the PDL pool with both feet. As expected, the water is warm, refreshing and quite comfortable. Thanks in part to the many wonderful people who follow the principles set forth by Julie Christensen, creator of the Protective Diet. While I subscribed to the entire program, I have yet to achieve that 100% PD lifestyle, it’s a goal I will continue to strive to attain. Right now, day 15 as I look back what have I learned?

First, this lifestyle is an ultra marathon, not a sprint. While I have expectations, I know for a fact, if I follow the the Guide to Optimal Health I will see improvements in my overall life. Weight will be down, clothes will fit better. Energy will be up and I will be living to eat, instead of eating to live. The steps are simple to follow and to date, I am setting a good pace in the early portion of my journey back into the Protective Diet lifestyle.

Keeping a journal has been great fun, then again I enjoy sharing my experiences, not only to help myself but to help others who could potentially run into issues moving forward. It was great to hear Julie mention my previous success (56:00 minutes) in Class #200 Stop the Snacks Challenge. What made a difference recently, as Julie cited, was going back and re-reading my PD testimonial I posted  in October, 2013. Reading can influence our decisions, but “a picture is worth a thousand words.”

I know I fall back on this repeated in just 2 weeks. Looking at where I was, bloated, heavy, out of shape and otherwise miserable, living with pains and unsettling blood work numbers. The after picture, taken at a Tough Mudder event and just slim and trim I look. I still remember how I felt that day and may days after it. The feeling was one in a million! Comparable to crossing the finish line in one of my 50 mile races. It’s something that I just can’t describe, but that feeling is short lived if you don’t follow through and resolve to maintain that lifestyle you created for yourself.

While I am not one for excuses, I know I have slipped a few in on my wife, one too many times and they get tiring to hear, over and over. While I don’t have any excuses, I know the mistakes I made, they were made knowingly that it would compromise my health and start me down a dark path, that left unchecked would take me to a place I vowed I would not return to. Looking in the mirror daily I didn’t get a sense of the regression. Stepping on the scale it was more apparent that my poor decisions were putting weight back on that I didn’t want to carry at age 48.

Still a few years away from 50, I vow now to have the best health in my life when I hit this milestone! It WILL be done! Why? Because I have been there before and I have the road map and experience to get there. Setting goals and monitor progress aided me in my journey, thus the reason I continuously write about my experiences, weigh myself and track the foods I eat. All these working together put get me in “my zone” where I feel I have the best chance to succeed.

Next milestone in this journey is 30 days. I know what to expect and where I believe I will stand when I report back. It my intention to “stay the course” and remain engaged with the PDL community for the love and support of those who follow this lifestyle. That aspect alone is priceless. I appreciate all the feedback and comments from those on the Facebook group as we all continue on this journey together.

It’s been far too long since I have taken a shot at DeNova Homes (#dontbuydenova) for their poor craftsmanship and lack of quality control. This has been seen repeatedly in our “new home,” lacking from before we even put down a deposit to confirm our home. If we knew all the red tape and bullshit we would run into with this purchase, we would never have gone through it and held onto our hard earned money. As a warning to future DeNova Homes owners, please rethink your purchase before it’s too late. 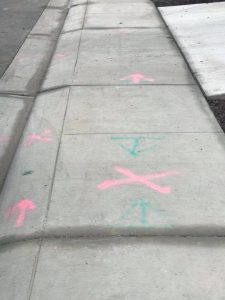 Just because I haven’t pushed the #dontbuydenova movement doesn’t mean all is well and good. It hasn’t been and we know it’s not going to get better. In fact it’s getting worse. It’s been a few months, but pulling up to our home in Emerson Ranch, Oakley I saw pick and green spray paint on the sidewalks. Not knowing what it represented I contacted a friend who was a Comcast installer and he gave me his best guess. Following that I Googled it. As the markings fell by the wayside, I didn’t put much thought into over the holiday period.

All the concrete in front of our home was marked, as seen to the left, as was much of our street. To my surprise, I came home last Thursday to see construction and many pieces of sidewalk suddenly missing, as a contractor has started to remove the marked areas. many of these marked with pink were due to cracking and I can only guess the green arrows confirm the portion of concrete to be removed.

A day later, we receive a letter on our door from DeNova Homes dated 1-12-18: 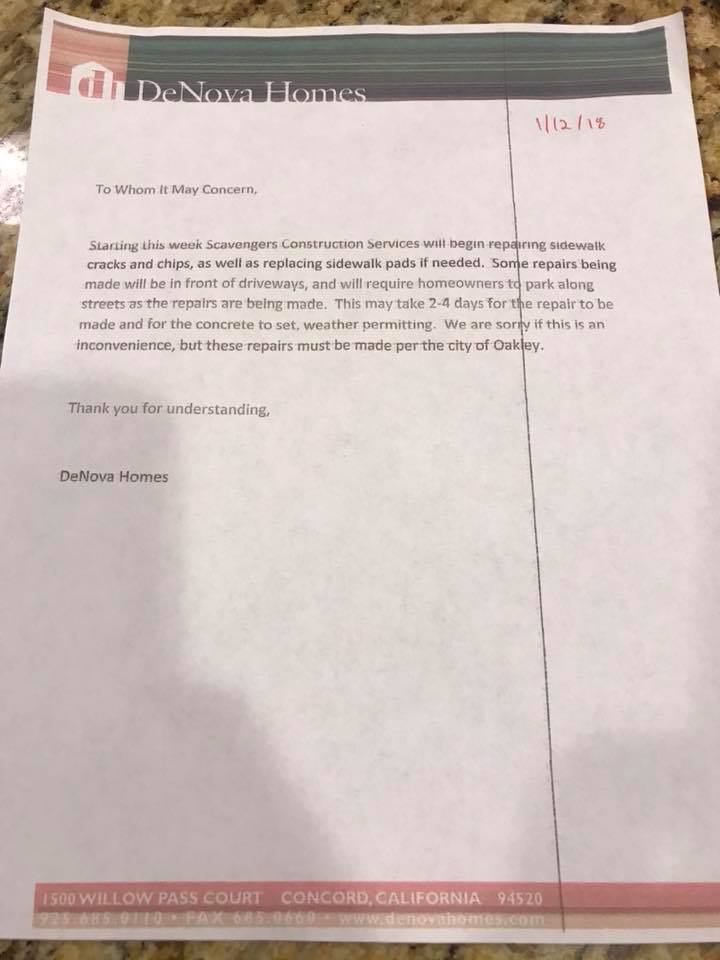 Their estimate of “2-4 days” hasn’t been realistic. Received the letter day after it was dated. While there has been some foggy, rainy weather over the weekend, as of this morning nothing had been addressed nor had all the concrete been removed. The same areas that were pulled out that week had been framed for pouring concrete. 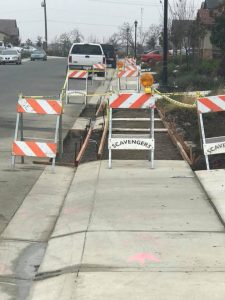 Out of curiosity, I contacted the City of Oakley for clarification of the removal and replacement of the concrete sidewalks. Their response, “We haven’t accepted the concrete improvements yet and our inspector has marked some that we know needs to come out. DeNova jumped ahead to fix those – without notifying the residents or us. It doesn’t look like drainage is related.” The last comment from the city was related to a question my wife asked of the contractors doing the work. Since we owned the house there has been a major drainage issue. While DeNova Homes will claim the lot was “graded for drainage” NOTHING drains. This can be seen very clearly in the front yard right on the property line, as we had a swamp growing in size before a contractor attempted to come out, on the request of our neighbor. No drainage pipe was replace, which tells me there was no real fix to the problem. All the swamp grass was removed and they covered the area with new bark. Guess that qualifies as “fixed.”

My point of contention is, if the concrete poured isn’t acceptable as seen by the City of Oakley, then why the hell doesn’t DeNova Homes address the poor concrete that forms our driveway and patio? I cited on 6/21/2016, in another email to DeNova Homes, “059. Concrete on front porch, in front of door cracking.” The response from their warranty manager, “The crack is not wide enough to repair. No action will be taken at this time.” At this time, so when it does become wide enough, does it suddenly get repaired with DeNova footing the bill? Of course not, by that time the house will be our of warranty and the homeowner will be required to pay the price to repair the poor concrete that was poured. 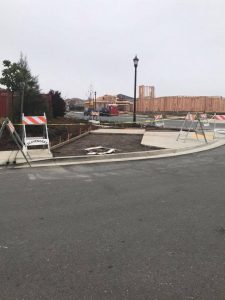 These cracks are just part of the problem. Along with color footprints in the concrete there are chucks of the top surfaces that have start to break off, compromising the concrete. I guess this is also not the responsibility of DeNova Homes. The concrete being replaced on the sidewalks speaks. Sadly, we are coming up nearly 2 years of ownership and the problems DeNova Homes has claimed to repaired still exist. We still have blue and green tape in our walls signifying a problem area that was never addressed by their sub-contractors.

There has been no worse buying experience than that we have continued to face with DeNova Homes. After this email I will be sending them another email regarding these sidewalk repairs and to question why our concrete problems were not considered for repair. Hopefully discussion reopens with DeNova and they are willing to accept more criticize regarding our home. My wife and I have received numerous contacts from other, new DeNova Home owners and sadly they all have similar stories of poor quality and craftsmanship in their new homes. It’s not just our house. It’s not just us, as we were told it was. It’s a MAJOR problem with DeNova Homes. Not sure why homeowners have not united together and put forth a class action lawsuit against this company and this poor quality homes. Maybe that’s something I need to explore, I am sure there is an attorney willing to go after a developer like DeNova Homes.