It’s like riding a bicycle in some regard. I’m beginning to think it was nothing more than a lazy approach to maintaining a healthy lifestyle. On Julie’s Facebook recommendation, I viewed Class #181 – Keep It Out & Keep It Off. This class was a reminder as to how and why you got to where you are (or were, in my case). For me, seeing my before/after image on my PD Testimonal speaks volumes to me. In fact, it’s shouting at me as I reestablish myself, behind the values of living a Protective Diet lifestyle. 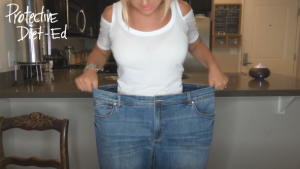 Like Julie and many others who have had success, I’ve had those moments where I try an old pair of clothes on and realize they are much to large for me any longer. The image of Julie standing in her size 22 pants is that reassurance that this healthy lifestyle is the key to success. While Julie holds the pants up, this is the realization of where I currently am. “Wow wee Julie, what a great visual,” exclaims Jerry! As she drops each pair pants and reveals her current healthy body. That is me! That is where I was and where I want to get back to.

That feeling of success was second to none, the only comparison I can draw from, comes from ultra running. The moment I crossed the finish line of my first 50k trail race, I experienced a “runner’s high” or “a feeling of euphoria coupled with reduced anxiety and a lessened ability to feel pain.” It was absolutely amazing to see and feel what I just accomplished and wanted to take my ultra running further, going longer distances. This is the same thing I want to do with my heath. I want to look good and feel good, full of energy to burn. 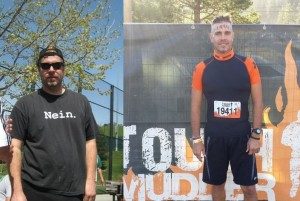 In my mind I have experienced success, but where did I go wrong? What caused my slow downhill slide over the course of a year or so to put me back to near where I started back in 2011? I believe it can be summed in with the term, “mindful eating.” Julie has discussed eating until full, this is where I have been failing. They talk about “too much of a good thing.” There are many cases where I have cooked a meal, only to see myself eating the whole damn thing. That satiated feeling gone, replaced by gluttony and lethargy.

This sort of eating saw me eat my way right back to where I was before making a change in my lifestyle, removing foods like meat and dairy, followed the oils and sugars. Time and time again, I would make an exception, “well just this one time.” Unfortunately that exception suddenly became the norm and I found myself losing control, slipping further away from optimal health.

Just three days in, I can already feel the difference in my eating habits. Work has been a big pitfall due to all the restaurants in Chinatown that cook amazing dishes, however very few fall into how we eat when following a Protective Diet. In the office, it’s a never ending cycle of sweet, sugary treats and the nonstop flow of coffee. Thankfully, I have been able to stick to the vegan basics; no meat and dairy. However, the oils and sugar, the “flavoring” of many addictive foods got a stranglehold on my eating habits. It was a long, dark decent back to a place where I swore I would never return to.

Like Julie and so many others, read all the testimonals, I know this lifestyle works! I have been one of those success stories, from the weight loss, to increased energy to great blood work numbers. Everything I did centered around achieving and maintaining my health. That is where I plan on returning to. Gone, but not forgotten are the daily runs I used to go on. Last year, I missed out on my 50 mile race I have completed the last 2 years. Plans were in the works to attempt my first 100 mile run, but seeing myself as I do know, that won’t be possible this year. Optimal health has been replaced with a lack of energy, a body I am not happy with, pants and shirts that don’t fit like they should. Pains have crept into my daily life. None of these things were present when I achieved my optimal health.

Approaching meals the past few days with the notion of “mindful eating” as the cornerstone to a Protective Diet lifestyle. It serves as a reminder reminder to eat until satiated. It’s a simple principle, but one I had failed to practice in order to maintain a healthy lifestyle.