It was a mixed performance for the draft squad this week as we continue to look up at the top spot in the 8-team league. A final score of 53 points saw my move 19 points close to the top spot, now trailing by 49 overall points, I feel confident I have a good squad to make that ground up. As for Gameweek 11, we enter the break in form and will look to make a few transfers to shore up a questionable defense. I might have to look at swapping out my bench, as I got caught with 2 players who didn’t start this weekend, but only one available off the bench. 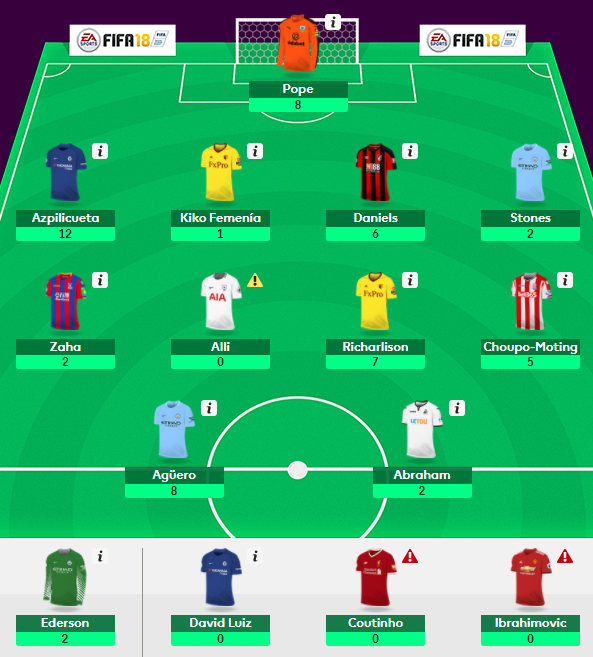 The waiver wire was very kind to me this weekend, as I picked up Nick Pope, Charlie Daniels and Kiko Femenia, all of whom started. Pope has been playing very well for Burnley and posted a season high 9 points on a CS, 3 saves and a bonus point. It was a good time to bring Daniels in, as Bournemouth kept their second CS of the season. Femenia was in and out of the BPS ranking much of the game, but 3 unanswered goals from Everton and he ended up with a single point. On the day, 15 points from three new players helped key my squad to their overall total.

The midfield continues to struggle. Dele Alli didn’t start, Philippe Coutinho is still nursing a groin injury, but due back for GW12. Wilfried Zaha struggled, as I knew he would, against Spurs this weekend but Palace looks great through GW19. Eric Maxim Chuopo-Moting returned another assists, giving him 3 on the season. Richarlison scored a goal, but was robbed of an assist as Cleverly couldn’t convert. A total of 14 points, modest return for my 4 midfielders.

Up front, Sergio Aguero scored his 179th goal for City and returned 2 bonus points for 8 points. This week I partnered him with Tammy Abraham, who failed to return for the second time in 3 weeks.

I still point to the midfield for my current struggles. Alli with just a single return in 5 weeks, as well as being injured for GW12 coupled with Coutinho out with the groin, it’s been tough going. Thankfully the defenders and forwards have help offset some of the pain. Richarlison and Chuopo-Moting have helped settle the midfield, but will be looking at Zaha with a run of good fixtures upcoming.

Some question of David Luiz falling out of favor with Conte, but he failed to start in GW11. This brought Femenia into the starting XI. My final bench slot is filled by Ibrahimovic, who isn’t fit to play…yet. However it’s my plan to get him in early to take advantage of his potential. Not sure if I will retain the injured star or sacrifice him for a third, healthy bench player. With the international break upon on, I will take a most of the 2 weeks before I figure out who to draft into my squad.