Last season through 27 gameweeks I posted an article titled, Captain’s Armband, which highlighted my failures to tap the correct player. Last year, by appearances I was always off a week when handing the captaincy to Alexis Sanchez. While he wasn’t the sole reason I struggled over the 38-week season, it was a contributing factor to my demise.

This year, selecting the correct captain through 10 gameweeks has been the difference of being in the top 10k or hovering around 1 million. Even the pundit sites haven’t been spot on, case in point Sergio Aguero in GW10. Tapped by two sites I follow, Aguero didn’t feature in the 3-2 victory over WBA. Yet, it’s been Harry Kane, the biggest loser when it comes to captaincy points. Voted as the best option for the captain’s armband in 3 of the first 10 weeks, Kane went on to disappoint fantasy mangers, returning in none of those games.

For me Kane has been the cause of my frustration. Unable to get the “monkey off his back” in August, I stuck with him, when Lukaku was showing promising form. His fortunes turned the following month recording 3 double digit hauls out of 4 games. Votes from the pundit sites saw Kane’s popularity slip during September, as he was handed the armband in GW5, but failed to return. However, Lukaku (twice) and Aguero both delivered during September as voted on by fantasy managers.

Kane’s underlying statistics were the talk around fantasy, but his inability to score at Wembley against lower league opponents were a cause for concern. Fixtures against Burnley, Swansea City and Bournemouth saw Spurs victorious, but Kane didn’t record any attacking points in the EPL. Champions League was another story at Wembley, recording 5 goals and an assist, further promoting him as the “in form” forward.

His home FPL form was revitalized after a 4-1 thrashing of Liverpool at Wembley, hitting for 2 goals an assist and 3 bonus points for 13 points. In fact his September form saw him record 11 goals and 1 assist during the month. At this point at £12.5 he was becoming essential in the starting XI. At that price point, it was argued that he should be leading the league in scoring, but based on current form, his dynamic performances and explosiveness, Kane’s form was nothing short of impressive. 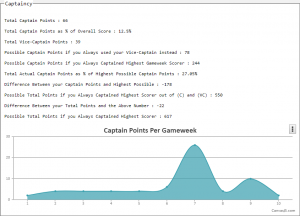