Late news to Gameweek 10 caught many managers by surprise when Poch informed fantasy managers that Harry Kane would miss the Man United fixture. This compounded by the “Pep-Go-Round” at Man City, it appears there are no guarantees in fantasy football. Then again, I think we all knew this going in, but play with fingers crossed every time we set out starting XI.

This week I took a comment that Dave from Burnley posted on Twitter and started Kane. Wise or not, it was worth the gamble, even though Kane sat out the entire match. We now wait to see where the the forward is come midweek and their UCL against Real Madrid. This could provide an indication of him being fit to face Crystal Palace. His replacement, Stephen Ward picked up 6 points with a CS against Newcastle on Monday. Nothing ventured, nothing gained. 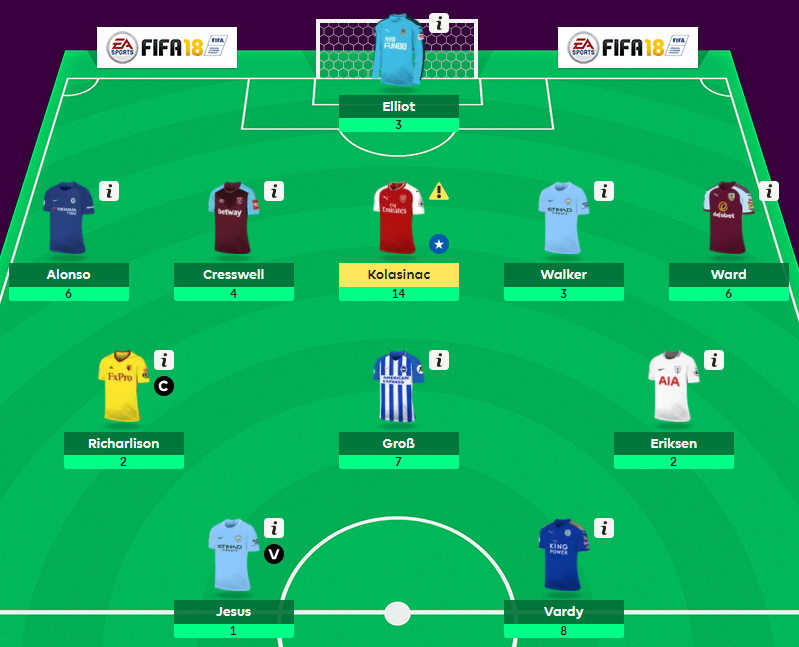 As for Gameweek 10, I went into Saturday with a -4 points, bringing in Richarlison as the second part of a 4-player swap that included Ben Davies and Jack Cork. In the end, I netted 4 points, which I look upon as a positive, especially with Davies role a bit in question with the return of Danny Rose. This was also my first hit of the season, something I really want to minimize this season after posting 39 negative hits (-156 points) last season. While Richarlison blanked on the week, he’s proven with worth with returns in the last 4 out of 5 games and good run of fixtures upcoming; ee/WHM/new.

It’s hard to be too surprised at Pascal Groß and his involvement with Brighton as he created a league high 95 chances last season in the Bundesliga for Ingolstadt. Brighton have score 10 goals this season of which Groß has been involved in 7 of them (2 goals / 5 assists). He continued with consistency in GW10 providing his third assists in the last 3 games and picking up 2 bonus points for a total of 7 points in the 1-1 draw with So’ton. Unfortuantely, Christian Eriksen didn’t fair as well, playing a deeper role, as we saw against Liverpool, Eriksen didn’t provide much of a spark for the Kane-less Spurs. That’s back to back blanks for Eriksen as Spurs face Palace this weekend. Intentions are to hold Eriksen as after GW12 and a visit to Arsenal, Spurs have a great run of fixtures; WBA/lei/wat/STO/BHA.

While Kane was included in the starting XI, I knew it was nothing more than a place holder. Partnering up front was Jesus and Jamie Vardy, while jury was out on Jesus and his minutes, it was a matter time before Vardy broke duck and scored. Jesus disappointed, nearly non-existent at times, as Aguero watched from the bench, but he didn’t gain any foothold with a disappointing 1 point performance. Vardy of the other hand, got on the board early with a goal, finishing with 8 points, his first return in 4 weeks.

As it has been much of the season, my score was bolstered by the 5-man defense, which continues to pay dividends. While not the most popular formation to run out, this was another example of attacking returns combined with clean sheets that pulled my gameweek from the doldrums. Lead by Sead Kolasinac, a goal, assist and 3 bonus points he finished the day on 14 points leading all scorers. This was his first attacking returns since GW4, while he was on my shortlist, I am reconsidering him but he’s got a tough run of fixtures; mci/TOT/bur/HUD/MNU.

New boy, Stephen Ward, as mentioned earlier picked up 6 points on a CS and Marcos Alonso might have bought himself another week providing a his third CS on the season, first in 5 gameweeks. At £6.9m, his not performing up to his price with just 2 goals, no assists and 3 clean sheets, Chelsea have Man United this week and Liverpool in GW13 and Arsenal in 22, aside from that it’s a sea of green. Might be too hard to ignore moving forward.

Aaron Cresswell nearly gave way this week for Davies, but was saved for a few more games, as Davies was no longer a reliable starter. While Cresswell does face Liverpool at home in GW11, he picked up his first assist of the season in just 45 minutes of work. Not sure if only 45 minutes of action is a cause for concern as he was substituted at halftime in favor of Arthur Masuaku. Cresswell leads all defenders with 72 crosses on the season with 12 chances created equating to 57 minutes per chance.

Not quite sure what is going on defensively for Man City, 2 goals to Stoke City and 2 goals to WBA, in two of the last three games might not be a cause for concern for the offensive juggernaut, but fantasy manager expectations are set higher. Both these matches should have been clean sheets, but left mangers scratching their heads. Kyle Walker has returned 7 weeks in a row! With 4 assists and 5 clean sheets Walker has scored 42 points. I am looking past his on goal in GW8, which negated his assist points. Yet City have a favorable run and Walker is a cornerstone in my current defensive minded formation. 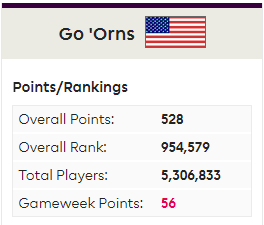 The most frustrating part of this FPL season has been the poor captaincy output, scoring just 66 points (12.5% of overall score) on the season. GW7 and GW9 are the only weeks I scored double digit returns (26,10). This lack of points has resulted in my squad been stuck in a virtual quagmire around the million mark. Just 10 points a week over 10 gameweeks, totaling 100 points would put me just inside the top 5000! That’s how frustrating its been to start this fantasy season.

Interesting to note that one of my goals for the season was to average 60 pts/week. When I have been able to start a 5-2-3 formation, I have averaged 59.3 points. Unfortunately due to Pep, injuries and benched players only 4 games have finished with a 5-2-3. The 4-4-3, using Jack Stephens (automatic sub) off the bench in lieu of a fifth defender has produced just 47.5 points over the a 4-game period. GW10 was just the second time running out a 5-3-2, which is currently averaging 53.5 points.

Looking ahead, the 5-2-3 (or 5-3-2) seems to be losing its potential, as forwards are struggling. At City Jesus and Aguero appear to be in rotation, Kane is injured, Morata, still returning to full fitness hasn’t been impressive the last 2 games, while Lukaku has no goals in his last 3 (but does have 3 assists). The “power 3” seem to be losing favor as fantasy managers look to stacking the midfield. 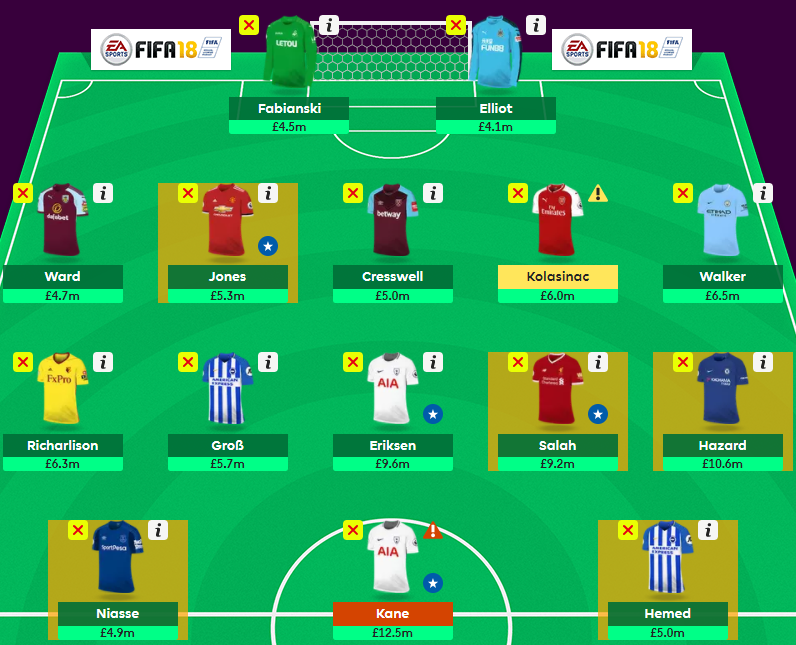 As I wrote yesterday in FPL: 4-5-1 Viability?, could this be the next iteration in my fantasy formation? Running a few different scenarios I have been able to put forth a competitive 4-5-1 and 5-4-1 formation with Harry Kane leading the attack. However, Romelu Lukaku might be a stronger candidate, based solely on his consistency. While Kane has proven himself at Wembley in GW9 with a 16 point haul, giving him 4 double digit hauls on the season his consistency has yet to be seen. However, I feel Kane is more explosive than Lukaku. Currently Kane sits a single point ahead of the Belgian.

Risk with a lone forward could be high, but running out the likes of Eriksen, Salah and Hazard could reap huge rewards with budget midfielder Groß and Richarlison seemingly hitting stride and putting together fantasy points and consistency. Defensively, this squad mixes attacking defenders, Walker, Kolasinac and Cresswell with clean sheet viability in Ward and Jones. Only concern would be the lack of forwards on the bench with Oumar Niasse and Mama Biram Diouf. Niasse has been a part time player for the struggling Everton, while Diouf has 3 goals on the season but does play all 90 minutes.