It was another weekend that didn’t allow me the luxury of watching any EPL games. Maybe that was a blessing in disguise, as overall scores appeared way down. I still laugh at all those managers who knee jerked, bringing in Aguero to over the nicked, Harry Kane. Talk about a tragic failure! Then captain him to boot! Double whammy! Thankfully, I kept faith in Harry, using an last minute idea from, Dave from Burnley. I started Kane, just on the off chance he made a short cameo. We know that didn’t happen, but will be pleased to get some points off the bench.

Moving forward it appears the balance of power has swung in support of the midfielders. Gone are the early days of the “power three” or “big 3 forwards” to anchor your fantasy team. We have seen more midfielders coming into form, as well as some budget performers who’s consistency is starting to pay off. Of course, the week I bring Richarlison in, he blanks. Damn! Did I mention I love this game? 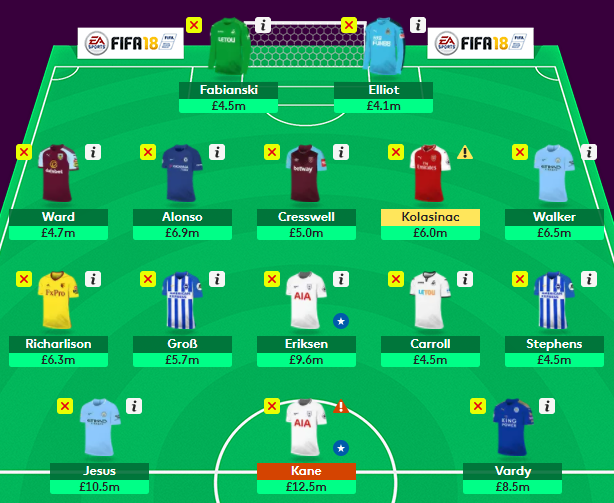 So what is a fantasy manager running a 5-3-2 formation supposed to do? I mauled the idea over 2 weeks ago and instead of making changes to my squad I activated the Free Hit Chip, which resulted in a season low score of 36 points. Not what I was expecting. This week I took my first -4 point hit, moving Jack Cork for Richarlison. This move was the second part of two transfers, which saw Ben Davies out for Stephen Ward in. Going forward I believe Burnley has a great run of fixtures and Ward has been a pleasant surprise this season.

The addition of Richarlison had my starting XI line up as a 5-2-3, first time I have used that formation this season. As of Monday, before Burnley hosting Newcastle I have scored 47 overall points with Rob Elliot and Stephen Ward to play. This as the weekly average is just 39 points! Unfortunately, the injury to Kane is a cause for concern. Left out this week against the loss to Man United, Spurs looked toothless up front with Son, as Eriksen was relegated to a deeper midfield position. Hopefully the midweek UCL fixture against Real Madrid will shed light on his availability, home to Crystal Palace in GW11.

With very few forwards “in form” I was considering moving Jesus and Vardy for budget options. Names such as Abraham and Diouf were top of the list. Not sure I want to consider Glenn Murray, who’s three goals in the last 2 games has fantasy managers looking at his potential. He’s the third most transferred in forward for the week before the aforementioned Abraham and Diouf. Using these three forward would cost me £23.8m, leaving me £17.1m to spend in the midfield.

It’s not uncommon to play five midfielders, as the 3-5-2 is a rather “common” formation for many FPL managers. However, combine that with 4 defenders and a lone striker, it could be a risk many are unwilling to take. So far this season we have seen little consistency in the forward position, outside of Romelu Lukaku. While he’s not setting the net on fire, his 62 points are third best this season, just one point behind Harry Kane and 9 behind Leroy Sane’s total of 71 points. While I still feel Kane is more dynamic, offering a better chance of “big returns” it has been Lukaku who’s returned 8 out of 10 games this season.

Currently I feature Christian Eriksen, Pascal Groß and Richarlison as my 3-man midfield. With a stout, 5-man defense I have some hefty funds wrapped up in Marcos Alonso (£6.9) and Sead Kolasinac (£6.0). With his 14-point performance on Saturday, I am inclined to hold Kolasinac, which leaves Alonso, the fall guy to free up the necessary budget to build my 5-man midfielder.

The short list includes Eden Hazard. At 5.2% owned, his leadership and potential could be a BIG differential if his GW10 performance is any indication of his upcoming returns, as he recorded his first double digit (11 points) return of the season. At £10.6 he isn’t cheap, could fit into my 4-5-1 plans.

Liverpool has a run of good fixtures upcoming having just CHE in GW13 and ars in GW19, it’s all green for the Reds through Christmas. While I haven’t been a big Mo Salah fan, he’s been on of the best midfielders through 10 weeks. At £9.2, his 57 points trail those of Eriksen and Sane but has returned just once in the last 4 weeks. Bringing Salah and Hazard in together is possible, but unlikely as I would have to move Alonso. Even though he hasn’t produced I am not sure I am completely comfortable with that.

Other options would see Alonso being moved for Harry Maguire (£5.1m). We know Claude Puel take a defensive minded approach to his game plan and Maguire could benefit even home to Man City in GW12 and Spurs in GW14. This would free up enough budget to allow Raheem Sterling and Eden Hazard to round out my starting XI. 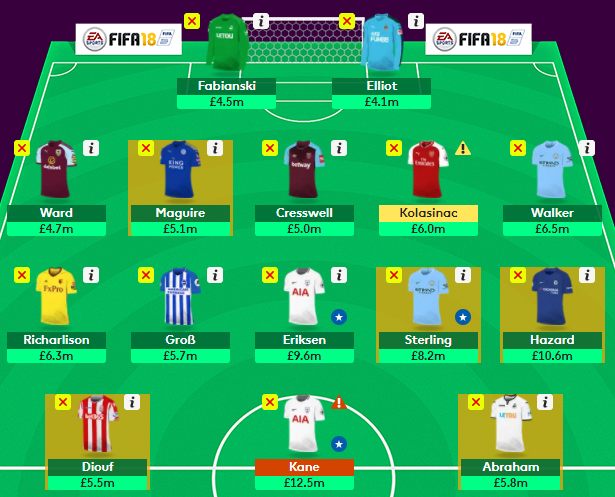 While Sterling isn’t my first choice from Man City, I would need to free up another £0.3m in order to secure David Silva. Without downgrading Kolasinac or Kyle Walker, I would need to make due with Sterling and the “Pep Carousel” until I further notice. I am keeping a close eye on Riyad Mahrez as well, a goal and 3 assists in his last 3 games, now playing in a more supporting roll for Jamie Vardy up front.

Regardless of the players that are transferred in, this plan will take a few weeks to implement, as I don’t intend of taking a big hit to bring them all in. I won’t be opposed to take a few more 4-point hits to expedite things in order to strengthen my midfield. For example, Hazard in GW12 against West Brom with an away fixture to Liverpool the following week. Sterling can wait until GW12, as City hosts Arsenal this coming weekend. And with Pep at the controls, who the hell knows if he will even start!