In my last article for FantasyFootballGeek, I preach “patience,” a quality I feel I have employed since Gameweek 1. Approaching GW9, I have attempted to look ahead and plan future moves in order to take advantage of a lucrative schedules for players I’ve had my eye on. With kick off just a few hours away, I have not come up with any solution for my current squad. There are some good match ups this week; Chelsea home to Watford, Man United away to Huddersfield and Man City hosting Burnley. Spurs hosting Liverpool has question marks all over it and running with Davies, Eriksen and Kane was a bit concerning, as their home form hasn’t been up to snuff.

For the week, I have decided to activate my Free Hit Chip to bring in, what I feel are a solid group of fantasy options that should hopefully provide a strong return for the gameweek. While activating chips early, in the past, have been a cause for concern, this is a new chip and we have yet to see how or when it is best to use this chip. I’ve been it used with a positive return in the past few weeks. I thought there were some good match ups, so the chip is on the table and here is what I did with it. 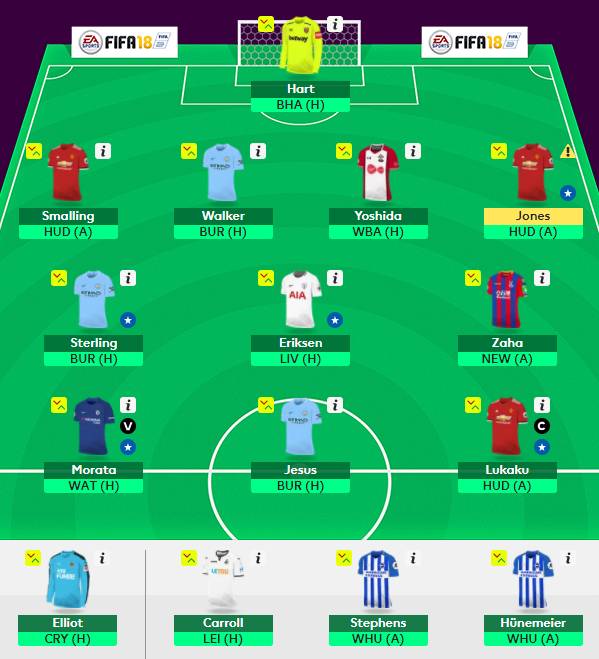 Since this week is about “going bigger” up top, let’s look at the changes to the 3-man forward line. I retained the services of Jesus against Burnley, even with some questions mark surrounding the return of Aguero, I figure Jesus will feature for at least 60 minutes. We have seen what we can do in that time frame. Kane has been nothing but frustrating this year at Wembley, while I still back up, I decided to move him in favor of Morata, who’s home fixture against Watford looks promising. Finally “Big Rom” makes his debut on my squad against a downtrodden Huddersfield.

With Kane temporarily out of my starting XI, the decision was made to keep Eriksen as my premium midfielder, he’s provided more consistent returns for Spurs, both home and away. I went with a FPL community favorite this week in Raheem Sterling, who’s inclusion is a bit concerning for me, as I have never been a big fan for club or country. You can’t deny the success he has had this season, so I push my allegiance aside and give him a start. Finally, Crystal Palace’s Wilfried Zaha will make up my 3-man midfield. Playing OOP as a forward, proved a viable differential last week in their 3-2 victory over Chelsea. We should see him retain that advanced role away to Newcastle.

Defensively, I have doubled up on Man United with Jones and Smalling, as you can’t deny the bus that Mourinho has parked at the back of the United defense. Planning on a CS from the Red Devils this weekend. Walker was the only current defender who made the Free Hit cut and gives me an attacking defensive option, after last weekend’s assist was nullified by an own goal. The 4-man defense is rounded out with Maya Yoshida against WBA, who continues to struggle to find the back of the net.

While this activation of my first chip doesn’t fall in line with my “patience” line of thinking, I feel it’s the right time to play it. My squad has some short term issues that need to be addressed and I wasn’t happy with the options I was presented. At best, it would have been to hold the FT for GW10 and make two changes next week. We will see just what GW9 has in store for us.

My draft squad saw further change this week as I brought in three new players to help bolster my attack. Thankfully I should have Aguero back this week, who is looking to become the all-time Man City scorer and Pep wants that to happen at home. Could this be the weekend? 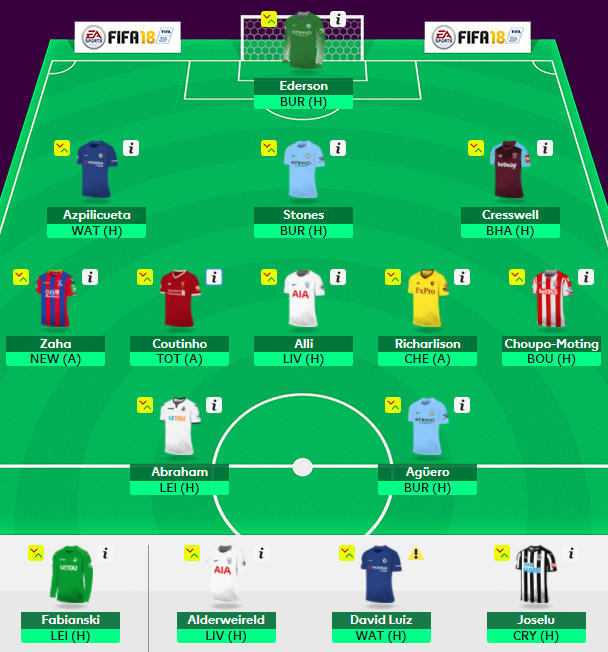 For GW9 I brought in Zaha, Chuopo-Moting and Abraham to my squad, all of whom will gain their first start for my fantasy team. This will also be the first time I start a 3-5-2 formation, dropping Alderweireld and Luiz to the bench.

Starting defensive for GW9 will include Cresswell home to Brighton, Stones gets the nod home to Burnley, while Azpilicueta will face Watford at home. All three of these starters have great potential to record a clean sheet.

On paper, the midfield looks solid; Alli, Coutinho, Zaha, Richarlison and Choupo-Moting. Unfortunately Alli has been lackluster to date, while Coutinho is still getting his shooting boots and form back. Richarlison and Choupo-Moting are both the “hot” budget type midfielders that fantasy owners have been yearning for. While Watford’s match up doesn’t bode well against Chelsea, I like him for the long term. Finally, Zaha, playing OOP as a forward against newcastle. He looked great in his first game back against Chelsea, so it’s my hope his form continues.

We will see just what transpires this weekend, as kickoff is quickly approaching.