Now 8 weeks into the FPL season and it continues to be unpredictable. From Man City scoring 29 goals through 8 weeks, including 19 goals in the last 4 games to Harry Kane’s feast or famine approach as his struggles continue at Wembley. Nothing has come easy this season for fantasy managers. However at the conclusion of yesterday’s match I will consider myself fortunate that I finished the week on 50 overall points, which was 9 points more than the weekly average. On the season, I am now at 634k, my highest overall rank to date, riding back to back green arrows. 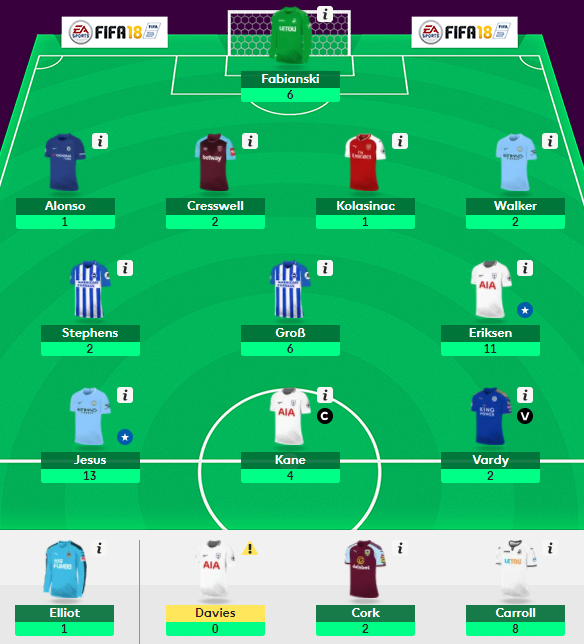 Much like Harry Kane, I am feast or famine when it comes to defense, setup in a 5-2-3 formation. If my defense doesn’t provide clean sheet points I am going to struggle. Gameweek 8 was one of those week, save Fabianski shutting out Huddersfield 2-0 to record 6 points. Before kickoff I was already sporting zero from Ben Davies, who missed out due to illness. My remaining 4 defenders; Alonso, Cresswell, Kolasinac and Walker totaled 6 points. Was riding high on Walker, transferring him in for GW8 as he provided an assist, which was quickly nullified due to an own goal and City giving up 2 goals.

Davies is now a concern with Danny Rose coming back into fitness, the ECL match could be the final straw for him, as he has performed very well from the start of the season. The concerns don’t end there, as Kolasinac was unimpressive against Watford in their 2-1 loss, while Marcos Alonso, who’s still getting forward and shots on goals has just 1 clean sheets since GW3. Change is on the way defensively, something I didn’t want to do, but Davies is now short listed, pending the Spurs ECL match midweek.

The midfield duo of Pascal Groß and Christian Eriksen both returned in GW8. Groß picked up an assist in Brighton’s 1-1 draw against Everton. Their fixtures look good through GW12. At this point I am still considering keeping him, but their lack of offensive returns is a bit concerning. Eriksen, not the top midfielder continues to provide at a consistent rate. Finishing the gameweek on 11 points on the back of a goal, now 3 on the season and a CS, he secured 3 bonus points. However, the lack of returns from Kane, home at Wembley is a big concern, as is the Spurs upcoming fixtures; LIV/mnu/CRY/ars. While Palace is highly tempting based on their poor start to the season, I don’t see many goals in the other 3 fixtures. There is some thought to ship the Dane for greener… make that sky bluer patches with a Man City midfielder.

Up front it’s Dr. Jekyll, Mr. Hyde with Harry Kane, performing like a Ballon d’ Or footballer one week, followed by a League 2, has been the next. Owning him has been nothing short of frustrating. As I described in the beginning, it’s feast or famine and captaining him on a famine week has left many fantasy managers starving for points.

Jesus was the star of the show for the week, hitting for a brace and securing 3 bonus points, he finished on 13 points. I never considered him to don the captain’s armband, but with how easily City is scoring, he might be a candidate if Kane is playing home, at Wembley. The situation with Jesus is muddled further by the impending return of Aguero to the starting XI. Depending on home/away fixture, I would be willing to partner Jesus with Aguero. We have seen Jesus play the full 90 minutes just once. We will wait and see what the ECL match brings today for City. 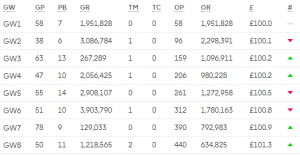 My third forward, Jaime Vardy failed on Monday, to the point that Craig Shakespeare was fired. Just what that means for Leicester City is yet to be seen. The Foxes responded positively last season when he took the helm replacing Claudio Ranieri. I am considering holding Vardy with swa/EVE/sto to come. At 8.5m, Firmino is the only option I would consider, but have already walked that road earlier in the season and not sure I want to return to it until Sadio Mane is back in the starting XI for Liverpool.

The other option, which might be consider a stronger move would be the watch the fitness of Alvaro Morata and insert him into the squad. It will take a bit more of a shoehorn to fit him in, which would require dropping the consistent, Eriksen for the likes of Eric Maxim Choupo-Moting or Richarlison, both of whom were on my short list. Can’t forget Philippe Coutinho, who’s returned 28 points in the last 4 games since his return.

The other option to consider, move from a 5-2-3 formation to a 5-3-2, which is what I had planned to start the season with until a late change saw to go with 3 big forwards instead of two. While not a supporter of Tammy Abraham, as Swansea has a difficult time scoring, his price of 5.7m is hard to ignore and as a third off the bench could be worth it.

With a shortened week and ECL games midweek, it will be interesting to see the rotation of players from teams like Spurs, Liverpool, Chelsea, Man United and Man City. Having already missed the price rise this week, I am inclined to hold out until Thursday before making any changes, but I might end up with a -4 or -8 point hit, IF it can be justified. I do believe any Man City players will cover that hit, while providing a return.