We are not 7 weeks into the EPL season and FPL Draft isn’t holding the sort of thrill and excitement I thought it would. Initially, I felt there could be some interesting aspects to the game. Considering I come from a fantasy (NFL) football background of 38 years, this draft game did show some early promise. To date, I am just not impressed. Maybe my thoughts would be different if the 8-team league I play in were local friends and not some unknown Internet alias.

That said, I climbed into 2nd place in my draft league after a strong-ish showing this past weekend scoring 44 points, which was second highest in the league. After 7 weeks I have scored 305 points, which is now 36 points off the top, which I expect to take in the coming weeks after the international break. 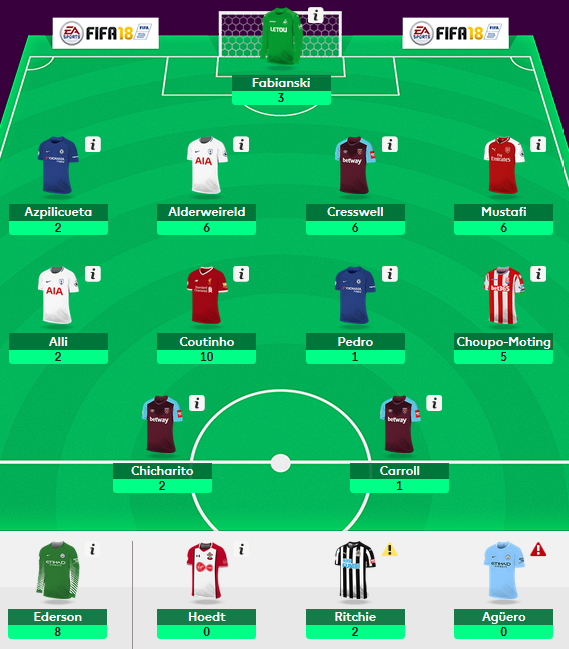 Its interesting to not as we get further along in the season, the more transactions I am taking through the week. I stated the week with 3 waiver claims; Hoedt, Chicharito, Mustafi. I ended up getting all three of the on Thursday and dropped Mendy (inj), Benteke (inj) and Lascelles. But that wasn’t enough, the merry-go-round continued into Friday, adding Niasse, Richarlison, A. Carroll, Cresswell and Choupo-Moting. In the end Richarlison and Niasse, along with Stones, Jese and Joselu were dropped.

On the week I started Fabianski in goal over Ederson because of the match up. Only a late goal by West Ham denied Fabianski his 4th clean sheet on the season, but he did scoop up a bonus point. Defensively, my squad is sound, as I started a 5-4-1, tripling up on West Ham. Mustafi, Cresswell, Alderweireld and Azpilicueta combined for 20 points, with only “Dave” not keeping a clean sheet in a 1-0 loss to Man City. My fifth starter was Hoedt, who was benched in favor of Van Dijk, which mean Pedro was slotted in.

The midfield looks good on paper, but Alli continues to struggle, posting another no return, while Coutinho continues to look good in the Liverpool midfield with another goal and 10 points. The new boy, Choupo-Moting (5 points) was a late add over Richarlison, but he secured an assist, his first of the season. Pedro was the first player on the bench and I had no intention of starting him against Man City but felt he had a better chance than Ritchie to gain points. I was wrong, Ritchie scored 2, Pedro, just 1 point.

With Aguero now sidelined and down a bench player, I moved both my struggling forwards and doubled up on West Ham; Hernandez and Carroll. That move failed to pay off as they combined for just 3 points. The Hammers still have some favorable fixtures; bur/BHA/cry out of the break, but I am not sure if they will retain their starting spots or not.

With 2 weeks to plan and make moves, the waiver wire is open until Friday, October 13, which means we have a lot of waiting to do. I have put in a claim for Fellaini, even though they face Liverpool out of the break, followed by Huddersfield. The other wire claim I put in is for David Luiz, somewhat surprised he is out there, as it SHOULD be a Chelsea CS when they come out of the break against Palace.

Rebounding from a disappointing 51 points in GW6, Harry Kane’s clinical finishing powered my squad to a season high, 78 points this week. While everything has been smell roses, its comforting to head into the break on a green arrow that sees me at with 390 overall points ranked 792k. This after two red arrows in the previous weeks, but all isn’t well and this international break could prove interesting.

One constant this season has been my patience. There has been an effort not to “knee jerk” players because of a single bad performance. However, I still feel I was a week early on my wild card, but amazingly 2 weeks later all seems forgotten. This week I was toiling around Phil Jones and Jamie Vardy, both carrying knocks into Friday and there was some question about them starting. Jones was still a concern when I went to bed Friday evening, but I decided to role with him. Thankfully both started. 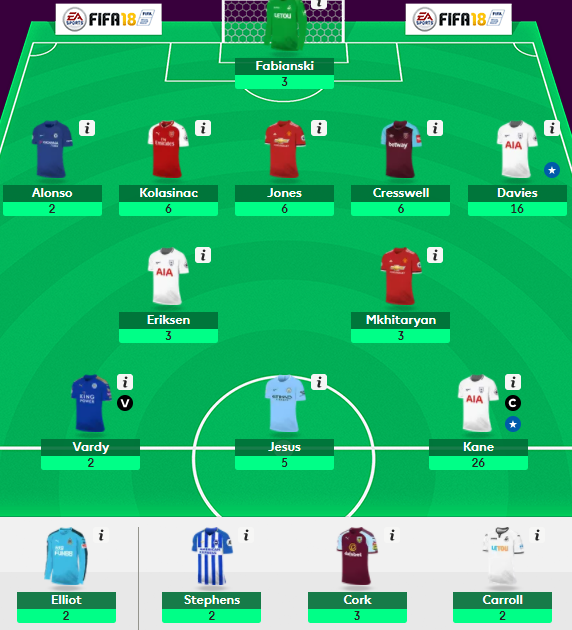 Defensively, the #5mandefence has been solid all season long. Now that the treble So’ton experiment is over, I had one of my best returns from the back five this week, with Ben Davies leading the way with 16 points (goal/assist/CS/BP). His 49 points puts him top of the league for defenders, ahead of the heavily priced, Marcos Alonso (32 points). Most managers knew it would be a tough fixture against City but his 2-goal performance in GW2 is nearly a fleeting thought, on the back of just 2 clean sheets this season. The good news, Chelsea has a favorable run in the next 3 fixures; cry/WAT/bou. Just MNU/liv stand in their way for a great run through GW21! It’s yet to be seen if Alonso will make it out of the international break. Based on fixtures, it’s hard to bet against the Spaniard.

Sead Kolasinac, Phil Jones and Aaron Cresswell all came up with clean sheets, a total of 18 points. Of the group, Kolasinac has the best short term fixtures; wat/eve/SWA, while Cresswell faces bur/BHA/cry. United and Spurs hit some tough fixtures through GW11 but the way both are playing, their inclusion could remain a constant in my 5-man defense. Still looking to introduce a Man City defender. Nicolas Otamendi doesn’t really pique my interest due to his penchant for yellow cards, which put John Stones at the top of the list, due in part to my budget. Currently priced at 5.6m, puts me 0.4m short without retooling my defenders, which could mean moving Alonso for teammate Caesar Azpilicueta, freeing up 0.4m.

It was a cruel late goal for West Ham that saw Lukasz Fabianski lose his 4th clean sheet of the season. He continues to rack up save points, earning another one in Sunday’s match. He will continue between the sticks out of the international break, HUD/LEI/ars, but could lose out in subsequent weeks to Rob Elliot who face CRY/bur/BOU. 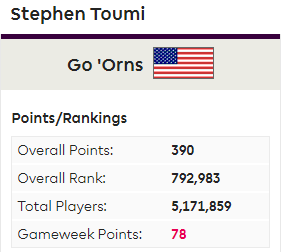 The midfield duo of Christian Eriksen and Henrikh Mkhitaryan struggled both failed to return this week. For Eriksen is was his second no return in 3 weeks, while Mkhitaryan seen just one return in his last 4 weeks. Both Spurs (BOU/liv/mnu/CRY/ars) and United (liv/hud/TOT/che) face a tough run of games the next 4-5 gameweeks. Mkhitaryan (15 pts) has been outplayed by Mata (16 pts) and Fellaini (22 pts) in the last 3 games. He’s also been hooked in the last 3 games; 87 mins, 74 mins, 65 mins, while Fellaini has seen the full 90 minutes in Paul Pogba’s absence. One the whole, midfielders are struggling league wide.

If unproductive midfielders aren’t enough, the forwards seem to have gone from feast to famine in the blink of an eye. Behind Harry Kane’s brace, to go along with the armband, he finished on 26 points, but it could have been much more if Spurs kept pushing through 90 minutes. Kane was clinical in his approach and netted his third 13 point return of the season (3 out of the last 4 games). All of which have also been away from Wembley.

With Sergio Aguero now injured and out for 4 weeks, Alvaro Morata sidelined with a muscle injury, it’s Gabriel Jesus as the only pure forward left for Pep. His starting spot should be secure. Jesus picked up the only assist of the game, finishing with 5 points on the day. City’s fixtures now turn for the better; STO/BUT/wba. For GW6 moved Firmino in favor of Vardy, but he’s failed to return. However, he is carrying a hip injury, which could be cause for concern, but still better than Firmino not making the starting XI yesterday. Vardy stares at WBA/swa/EVE/sto in the next 4 games. This was the period I purchased him for, with an eye on bringing Firmino back in starting GW10. 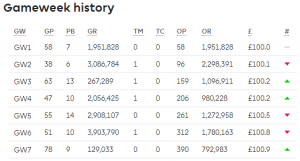 While Romelu Lukaku has been the most consistent forward, much like Diego Costa last season, he’s form isn’t sparkling. While he has lasted every minute of every game, returning all but one game and doubling up in GW1, 60.3% of fantasy managers still own him. Yet his days as the de facto captain could be called into question. Still in fantasy football, consistency is a good thing, but right now I don’t plan on bringing the Belgian into my starting XI.

Comparing this season to last, I’m currently on 390 points, which is an increase of 14 points. Yet, looking at the overall rank, there is a huge disparity, as I currently sit at 792k this season, but 376 points last season saw me at 168k. To break the top 50k requires another 47 points and 38 points to get into the top 100k. Team value is currently 101.0m, which is ahead of where I was planning, but it’s down 0.9m from last season.

The 5-2-3 formation continues to flourish, as it’s been played 4 out of 7 gameweeks, averaging 59.3 points! Non-starters have shifted the formation to a 4-3-3 twice and a 5-3-2 once, both averaging 51 points. While the numbers aren’t all that impressive, it does prove that this season a 5-man defense, while risky does carry merit with midfielders struggling.

With 2 weeks off we wait with anticipation to see how our players fair over the international break. We keep our hopes high they all return fit and without injury. It’s also time to evaluate where we are and what we play on doing to improve our squads. For me, 2 FTs does provide me a few options. Lukaku is tempting, but with unfavorable fixtures, I just don’t see it happening.

Reading the Twitter feeds, as well as a shout from #1, Matthew Barrick, his 3-4-3 has Lukaku, Morata, Kane up top. More importantly, his midfield has 3 budget starters (Carroll, Brady, Ritchie) with Salah as his higher priced player. It’s something I am now considering, downgrading one of my big midfielders to free up some budget to potentially improve defensively and go bigger up top.