It was the best week on record this season for my draft squad, overall points of 59, which pushed me up the table to second place. It could take some time, as I now sit 31 points behind the leader, but we have much football to play.

The return of Coutinho to my squad has been welcomed, with 5 weeks of no returns, he got on the board with 13 points. Dele Alli returned 2 assists after going scoreless the past 3 games. New boy, Matt Ritchie was quiet and didn’t return. It was Pedro, on my bench who struck for 8 points, which could potentially push him up the ladder to start in GW7 against City.

Up front, Kun Aguero got it done with a goal and assist for 11 points. Joselu, who’s got great underlying stats, still couldn’t finish. An injury to Benteke will have been scrounging the wire for a #3 forward. My 5-2-3 is in jeopardy with injuries an lack of consistency up front.

Defensively it was Azpilicueta and Stone providing 20 points. “Dave” returned 2 assists for Chelsea, while Stones picked up a CS. Unfortunately, Mendy left after 26 minutes with a knee injury, his stats is unknown. After back to back returns, Lascelles and Newcastle was quiet.

Mendy is the main concern and I’ve already gone to the wire to replace him. I am aiming for Wesley Hoedt at So’ton, as the Saints still have some solid fixtures through GW11. Lascelles might be shortlisted as they face Liverpool, which means I would look towards Mustafi, with hosting Brighton this weekend.

I have been avoiding any fantasy football sites and Twitter feeds this week. Frustrated and disgust has set in and we are just 6 weeks into the EPL season. The wild card has been more of a vex than revelation as we finalize plans for Gameweek 7. Thankfully, we can look ahead, but for now we look back at what COULD have been for GW6. 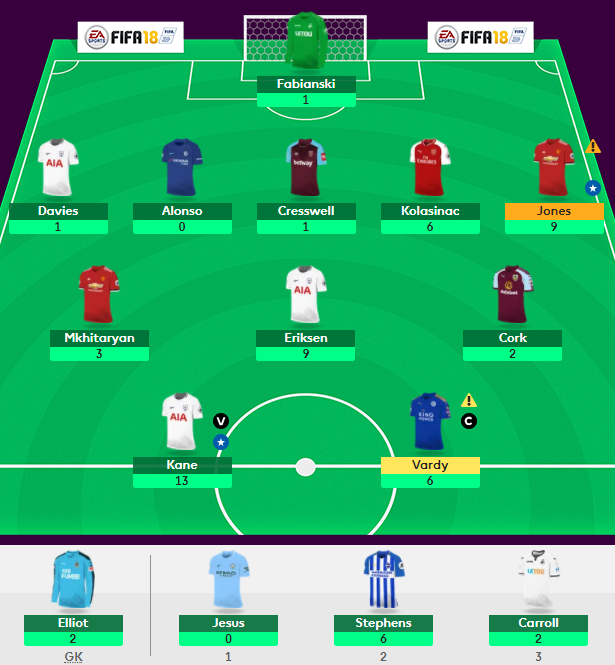 Gameweek 6 is being viewed as a failure or week that could have been. Been better. Been more productive. Jesus was started, but Pep rested him. Alonso hit with a yellow card saw just 56 minutes on the pitch. Kane hit for a brace, which was great, but I decided to captain Vardy. Speaking of Jamie, he missed a penalty. This was also the first week I reorganized the bench order and moved Dale Stephens to the second substitute, as he scored 6 points. Instead, Jack Cork came in for Jesus. *sigh*

Final score for GW6 was 51 points, 9 off the average of 60 points, which saw another red arrow, for the second consecutive week. I dropped 500k spots, now at 1.78k. The season continues with its twists and turns. I don’t believe anything is settled at this point. One thing remains consistent, I am showing more patience than I have the last few years. However, I probably should have kept Kane as my captain instead of flip flopping through my forwards, looking for an differential.

Defensively, I am pleased with my #5mandefence, but it was a rough one as Davies, Cresswell and Alonso accounted for just 2 points. I expected a low score from Cresswell, but Davies and Alonso were unexpected. Kolasinac and Jones responded well, each with a clean sheet, while Jones picked up 3 bonus points. Last week it was Fabianski’s time to shine against Spurs, but failed against Watford with just a single point.

At this point in time I don’t feel bad running out two starting midfielders, as many attacking returns are coming from the forwards. Eriksen picked up his second goal of the season, as well as 2 bonus points for 9 points. Mkhitaryan and the Red Devils could only slot one goal home against a stingy So’ton defense, unfortunately he didn’t feature any attacking returns.

Up front, the benching of Jesus was somewhat expected, but I opted to move Firmino for Vardy and with no other stong contender in the midfield, I was left with Jesus as the third starter. Kane continues to feature well on the road, hitting for his second brace in 3 games, finishing with 13 points. Vardy was brought in because of his prolific scoring the past 2 seasons against Liverpool (5 goals). The missed penalty would have been his third brace against the Reds, but it was saved. Couple that with a yellow card and his return was just 6 points with the captain’s armband.

Looking ahead, I feel my luck has to change. Every move I seem to make is counterproductive. Strangely enough I am still running the big wing backs, as well as three big forwards. The big forward line seems to be all the rage now.

I have two problems to address. Phil Jones is dinged, as well as Vardy (75% chance). While Jones has been solid for United this season, I might have to move him if he isn’t going to play. On the short list is Harry Maguire, sitting on 27 points for the season and the Foxes face Bournemouth.

While I hadn’t really considered Morata, he does have one thing going for him. He has no competition up front, unlike Jesus. That would be the sole reason to make the move to the Chelsea front man, as own Jesus and seeing him benched (like Kun was in GW3) with no appearance is cause for concern. With Chelsea facing City this weekend, I can’t see bringing him in before the international break.