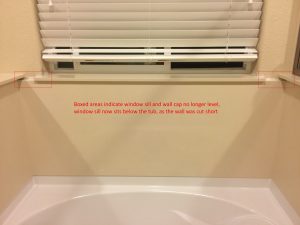 “Enjoy the home.” “Have a housewarming party.” Just two comments that still linger in my mind after the purchase. These were communicated to me, by my realtor, after numerous emails to DeNova Homes and some scathing comments made on this website. Unfortunately, here we are nearly 8 months later and we are still in a battle with #dontbuydenova to get our home to the level of satisfaction it should have been at when we closed escrow. At the center of the frustration, the master bathroom tub surround. This one area continues to draw attention because of the poor craftsmanship used to construct it.

Early this year there came a point where DeNova Homes offered to buy the home back. While their offer wasn’t satisfactory, they suggested to remove and replace the engineered stone with tile. Unfortunately their settlement agreement didn’t favor us and released DeNova Homes of future liability, under advisement from an attorney friend we did not accept the offer. Most recently, the offer finally came to replace the engineered stone surrounding the bathtub. This was what we asked for before we even closed escrow.

Why it’s taken countless visits from their warrant manager, the Director of Operations and the Vice President of the company is beyond me. This issue continues to cost DeNova Homes more time and money and still there has been no resolution. Without warning, Marble Palace, the company contracted to do the repairs showed up a few weeks back without advanced notice, saying they were going to replace the tub surround. After about 30 minutes, I noticed they were packing up. It seemed half of the shower would need to be removed in order to accomplish the repairs. Their supervisor told them to stop the repair, they packed up their tools and left. An email was sent to the warranty manager who replied, ” Nothing was supposed to happen until they discussed the repair process so that I could provide additional assistance if need be.” 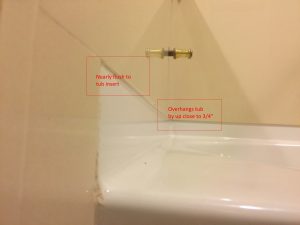 On December 1 I received an email from the warranty manager who would “schedule the final repairs for next Thursday the 8th. The arrival time will be between 8-12am.” I agreed and yesterday, while at work numerous contractors arrived to work on the outstanding issues. Kitchen cabinets were repaired and the trim was replaced. Many tiles on the kitchen and dining room floor that sounded hollow were removed, replaced and grouted.

Then there is the bathtub surround. *shakes head* Going back to a discussion I had with one of the sales associates regarding our house, she contacted the construction superintendent (real arrogant prick!) who mention to us the pony wall in the master bathroom was built incorrectly but not to worry, as it would be fixed before we moved in. Surprisingly that never happened, which in my mind has been part of the problem we have had with the tub surround. The initial complaint was a chipped piece of engineered stone on the tub surround wall. Contractors attempted to smooth it out, but it was quite evident the wall needed to be replaced. Instead of replacing the wall, they shortened the wall, so it didn’t match up with the other two walls. I won’t mention again just how poor the installation was, but it was not acceptable. While DeNova’s Director of Operations and warranty manager didn’t agree, we were fed up, which resulted in an email to the president.

Nearly all the work on the tub surround yesterday happened while I was at work, so I didn’t have an opportunity to see the 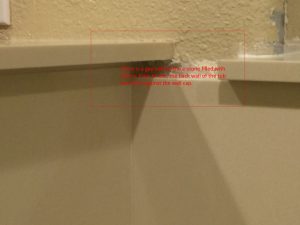 actual construction of the wall behind the drywall. There was a plumber on sight who removed the hardware. The marble contractors removed the e-stone, but not really sure how, can only assume they cut portion of it with a saw and demoed the rest with a hammer. The drywall contractor then rehung new drywall. The last piece of e-stone was being cut and fitted into the plumbing wall when I walked in. Honestly, I didn’t pay close attention to the detail how how the install looked. Even if I did, I would not have said anything to the contractor. Now, after the fact I will saw NEVER use Marble Palace, this sub-contractor is terrible, not once but twice!

If that wasn’t enough, the house was filled with tile dust, dirt, pieces of concrete and all sorts of shit that could have been avoided if the marble installers would have run some plastic to contain their mess. Unfortunately they didn’t and my wife spent the better part of Friday cleaning the house because of their work.

When I finally got around to checking the tub, which we were told not to use for a few days in order to let the e-stone set, it was readily apparent problems still existed. Shaking my head, I could only stand there in awe wondering how Marble Palace saw this as an acceptable installation? Corners weren’t squared on the walls, the window sill was nearly three quarters of an inch lower than the walls surrounding the tub and instead of seeing the walls all overhanging the tub, now only part of the wall was hanging over the tub, while the opposite side was flush with the tub. Again, it’s UNACCEPTABLE work!

As of this writing, there has been no contact with DeNova Homes directly, however I did compose an email and send it to the Vice President…again. It really appears she is taking a vested interest in our well being, unlike the warranty manager, who doesn’t seem to really give a f*ck. My wife and I appreciate the fact she is involved, maybe her involvement will spur some changes to what they got away with when they finished our home.