Just when you think it can’t get any worse…it does! Didn’t really think this free fall would continue for a third consecutive week, but it has. Right now, it doesn’t appear to matter who’s in the starting XI, no one is scoring. Talk about frustrating, Reading sites, listening to pundits and talking to other fantasy managers, it appeared I made some advantageous transfers (at a cost of -8 points) going into GW9. Yet those players yielded just 15 points! Again, I question, what the hell is wrong with my squad? In the last 3 weeks I have dropped 720k spots and for the first time this year saw a decrease to 101.8m (down from 102.1m). Scoring just 26 points, I was well off the average of  42, which has called into question my decision making skills or strategy as I continue to struggle finding a way to stop this bleeding. 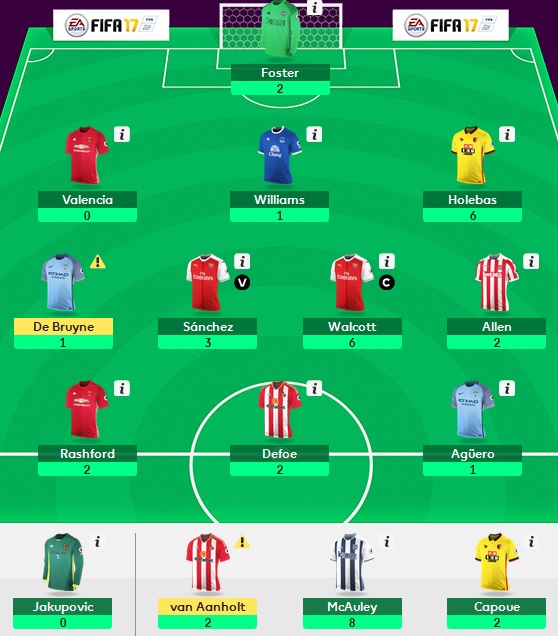 At this point, I don’t even know where to begin. Over the last 3 weeks I have accrued just 100 points taking my season total to just 427, an average of 47.4, well off my goal of 60 points/week. Looking back to GW6 I was averaging 59 points/week and things were looking great! After holding my transfer from the previous week I was looking at a double transfer to improve my starting XI. Wanting to take advantage of a few match ups, I opted to introduce 4 new players and take another -8 hit for week, which has cost me 10 points the last 3 weeks.

With De Bruyne a surprise start last weekend, it was always my intention to bring him back after his injury in place of Sterling. He lasted just 45 minutes picking up a knock and scoring just a single point. No player had been hotter than Walcott, yet I pick him up for the start and returns an additional 1 point for a clean sheet. He was also my captain, so he totaled 6 points. He was part of the Allen transfer, which saw me move Snodgrass out after that 6-1 debacle versus the Cherries last week. Snodgrass had been high on my list of players I wanted, but hadn’t returned in 4 games, yet the schedule is still in Hull’s favor. Bringing Allen in saved me 0.7, which allowed for the Walcott pick up. Unfortunately Allen took a goose egg, as Shaqiri was all the talk in GW9. with Stoke’s favorable schedule, Allen will remain as a 5th midfielder. Final move for the week saw me jettison Collins of West Ham, who had not played in the last 2 games for Holebas, coming off a 15 points week, Watford was able to grab a CS and Holebas put up 6 points.

Defensively, my team is still in a shambles. Foster played well vs Liverpool, still gave up 2 goals, but did register 5 saves. Has Leicester and Man U over the next few weeks, which I will ride out. Valencia looked sharp for Man U against Chelsea, at least offensively with some great crosses and pressure up the pitch. Unfortunately, 4 goals conceded is a problem. Arsenal and Spurs are the only concerns over the next 10 weeks, so I am still considering keeping him in the starting XI. Williams and Everton continue to leak goals, one per week from GW5 through GW8, finally giving up 2 and losing to Burnley. Mixed fixtures and suddenly Williams is on the short list to be replaced or benched. My bench saw McAuley score his second of the season and go for 8 points, while van Aanholt played the full 90 minutes, but conceded a goal to the Hammers

As I look over my midfield, things aren’t as they appear. Four players have blue and stars next to their name

as top scoring players. Yet De Bruyne, Sanchez and Walcott totaled just 10 points, while I sat Capoue in favor of a third forward. Captaining of Walcott over Sanchez was irrelevant, as both scored 3 points. I selected Walcott who’s 3 points doubled to 6 points. As mentioned earlier, Pep substituted KDB at halftime, initially reported as a tactical change at halftime but KDB took a knock to the calf. Thanks for the single marker Kevin! As for Allen and Stoke, a nice 2-0 victory, but Allen didn’t feature in any points. This marks the third weekend my midfield has not scored a goal and just a single assist over that same period. Now wonder I am seeing red.

Up front the only positive I can take away is the fact I dropped Zlatan after GW6, off his first of his current run of no goals or assists in the last 4 games. The additional budget was then used used to upgrade the midfield and I picked up Rashford the followiung week, yet like his counterpart, he has picked up with Zlatan has left off, returning nothing on the pitch. The last 2 weeks I left Rashford on the bench in favor of Capoue, again a move that was irrelevant as neither scored. However, I take a bit of solace in knowing Rashford looked dynamic in at the Bridge on Sunday against Chelsea. At this point, he is potentially expendable, as Man U are now two EPL games without a goal. I had sort of counted on Defoe as my “ace in the hole” with a favorable schedule and my number two forward. No returns since GW6 against West Brom, Stoke or West Ham. Like Rashford making me reconsider his potential moving forward with the likes of Arsenal and Bournemouth in the next two.

At the start of the season, there was lots of discussion about fielding both Aguero and Zlatan on the front line. How managers would rather have Zlatan if he wasn’t returning than NOT having him if he hit big. Well, he hasn’t big…yet but conversely neither has Aguero, just 3 points in the last 3 games with a -1 point last week after missing from the spot. City is in flux, winless in 5 games with a loss and two draws in the last three EPL games. Aguero, for me, is still a must start. The City attack, orchestrated by the likes of KDB and Silva still go through Aguero up top. No goals in the last 3 games, but still a must start. However that 13.0m price tag is becoming harder to swallow the longer Kun goes without returning. Unlike Zlatan, I still feel more confident backing City than I do United. Aguero remains…for now.

So what does all this mean? F*ck if I know! I thought I had this game figured out, but how star players fail to score and return negative points is frustrating. I know I can’t be the only one wondering down the path less traveled, completely lost. Ask me about my FT for GW10, I haven’t a clue what I will do with it. It seems everything I touch or transfer in turns to shit; Rashford, Sanchez, Walcott, De Bruyne, Allen…the list goes on. There are no guarantees, only form, fixture and a hell of a lot of luck. None of which I appear to have heading into GW10. All I can hope is I turn things around and start seeing green arrows.