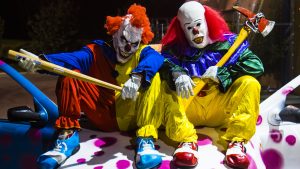 October represents the 4th year I have been in charge of designing and running the haunted house at Vintage Parkway Elementary in Oakley, where my son is in his final year. Over the years the teachers, administration and students have been very supportive when it comes to my endeavors in creating an integral part to the school’s harvest carnival. Prior to stepping up to take responsibility, another couple managed the haunt where guests could have a “scary” or “no scary” tour through. Needless to say, I got rid of that shit real quick. Why? A haunt is a haunt, part of the fun is to get and be scared, right? So non-scary made no sense to me. Sure it’s an elementary school, but my goal is to have every kid exiting the haunt crying. That tells me, I accomplished my job and the kids had a good time.

The last few years I began searching for a theme to unify the haunt. I wasn’t happy with a mish-mash of crap that may or may not scare kids. Originally, my idea began as a carnival or “carn-evil” theme to keep it in line with the harvest carnival the PTA puts on with booths, games, food and a trunk-or-treat. If I would have realized the need for a theme during the first year I believe I would be further along today, than where I am now. But that’s not why I am blogging today. My unifying theme was clowns or coulrophobia, the fear of clowns.

Social media has taken these otherwise innocuous reports and sent then viral, which the news media picks up and suddenly we have a revolution on our hands as Halloween rolls around. My first interaction with the clown phenomena was watching Dm Pranks Productions on You Tube. Absolutely sick and twisted, but hilarious to watch, the reaction of people running scared, away from what they just experienced.

Now I was realistic, knowing I would not be able to pull off a haunt full of pranks such as Dm Pranks, but the idea was genius! You can thank Stephen King, ‘IT’ and Pennywise in the 90’s for the term coulrophobia. While there are no hard facts and numbers of this phobia, estimates show from 12-15% of the American popular suffer from this. Chances are those numbers might be a bit outdated, thanks in part to social media and the news media blow many stories out of proportion, when individuals just want to have fun. But I am not here to debate the “fun” aspect over luring kids into a forest or van.

My enjoyment of clowns come from seeing the responses I get when others see me in the haunt. Startled, scared, maybe they begin to cry. It’s that satisfaction that tells me, “job well done.” Again, we are in a controlled environment, where none of the actors are going to touch or harass any guest. It’s purely ENTERTAINMENT VALUE! Unfortunately not everyone agrees.

To date, there has only been one incident in the haunt the past 4 years that involved closing it down a bit earlier than anticipated due to older middle or high school kids ruining the fun for the elementary school kids. Administration got involved, which was a good thing. Aside from that one incident, I have never been directed on what to create for the haunt when October rolls around. The administration and teachers have been very supportive of the time and effort I have put in to make the event enjoyable for the students and their parents.

Unfortunately you always seem to have that one parent who speaks out on behalf of the others than won’t saying, “…it’s completely inappropriate with everything going on.” Please, explain that to me. No child in our haunt has been touch, groped or fondled in the 4 years I have been in charge nor in the prior 2 years I was inside the haunt. So explain how dressing up as a clown is inappropriate? Would you prefer a flesh eating zombie? I mean, God forbid we have a zombie apocalypse in the near future, will you prevent your kid from seeing that as well?

“With everything going on…hoax or not this situation should be treated with caution when it comes to our children.” I could not agree more with you. Your child will be safe when they enter my haunt, no harm will come to them, but they might leave teary-eyed. If that’s wrong, then I suggest you and your child stay the hell away from the haunt. It’s scary…for some…but it’s done with best intentions. I am sure you have no idea how much money harvest carnival (which the haunt is part of) brings in for the school? The total amount collected (minus the budget to host the carnival) all goes to the teachers, which in turns goes to each student. Take this event away, both teachers and students lose out.

“I shouldn’t have to keep my son from doing school activities.” Uh, you aren’t. Come enjoy what the harvest carnival has to offer from games and food to trunk-or-treat! The PTA puts on an awesome harvest carnival! The haunt is just one aspect, if you find it inappropriate for you child, then by all means avoid it. No one is forcing to you face your fear of clowns, which has been reported by your local news and gone viral thanks in part to social media.

“This is unbelievable, you guys are worrying about the money you’ll be losing. What about children’s safety?” Above everything else a child’s safety is the most important factor when they enter the haunt. It’s my responsibility to make sure the haunt is built so walls don’t break or props don’t fall down potentially injuring a child. That would be absolutely terrible, something that no amount of apologizing could remedy. If I feel something is unsafe, then I look for another way to do it. When the haunt opens, child safety is still the utmost importance, as long as guests follow the posted rules, which include no running or touching of the props or actors, then everyone will get along and your child will exit. If they become scared and start to panic, we personally escort them out of the haunt.

As for losing money, you get your ass we would lose a lot of money for the teachers! This is one of the biggest and best fund-raisers of the year to close it down or worse, not have the harvest carnival would be devastating to the staff, administration and students of Vintage Parkway. While it wouldn’t be the end of the world, there would be a void in the school year at the end of October when fall rolls around and there is no harvest carnival, no haunt. Just a locked up, darkened school on a Friday night.

As for the clowns, this is my final year at Vintage Parkway. Please feel free to contact me and possibly volunteer your time and money to put on the haunt. To date, no one has stepped forward to take responsibility for next year. If you don’t like the theme, then make a difference, get involved and put together your own theme because this year isn’t changing. It’s coulrophobia and claustrophobia! Enjoy the haunt!