The greatest responsibility an adult has is raising a child. 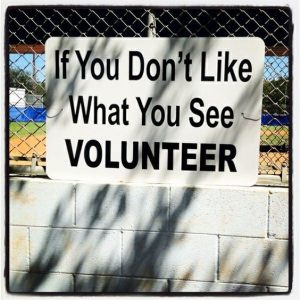 If that is truly the case, then why don’t more parents volunteer and support their children in their endeavors? Now this isn’t directed at one individual, but the masses, as I would guess a majority of parents don’t volunteer to coach their child’s team or work in the classroom or take a leadership role in scouting. These are just a few examples brought forth in this piece. Why though? Why don’t you take a vested interest in your child and pass along that knowledge and experience you have gained over your life on Earth?

To understand why, I think we need to explore the why not. First, it’s easier. “Let someone else coach my kid” or “I don’t want to participate in scouting” better yet, “PTA? Serious that’s for that’s for the hoity toity moms, not me.” Bottom line, too many people take a negative stand when it comes to volunteering as it relates to their child.

Why wouldn’t you want to be involved? It’s a great feeling passing along first hand knowledge to children who are ready to soak it up like a sponge and ask for more. For me, taking on the role of a Den Leader has been a big challenge, one which I didn’t think I was ready for, but wish I would have taken a year earlier. There is something to be said about leading a group of boys, eager to learn and be involved with each other. Scouting has put a new perspective on volunteering for me. That “one hour a week” is really more like 3 to 4 hours depending on what is on the scouting agenda. From camping trips to hikes to den and pack meetings, my role as Den Leader, as well as Quartermaster for the pack have kept me very busy over the last 2 years, but I don’t regret for one minute stepping forward to get involved.

If scouting for either boys or girls isn’t your thing and you take an interest in sports then step up and take on the role of coach or manager. Much like scouting, it’s a very rewarding experience. I’ve had the opportunity to manager baseball for 2 years and more so than scouting it had a bigger impact on me, as a person and as a coach. Why? As a youth I recall coaches I had growing up and there was always one, Keith Voigt, who sticks out in my mind as a coach I wanted to emulate. At age 10, I thought he was a baseball God, when it came to what he know and how he coached our team. I might know have known it then, but years later, standing on the diamond teaching a lesson to my wide-eyed ballplayers I now understand the reaosn why Coach Voigt was so passionate about the game he loved. Al Price of Big Al Baseball only reinforced that line of think when he said, “you develop the player and the person.” That’s so true when it comes to children, sports and life in general.

By far the biggest eye opening experience is being involved in the PTA. Growing up my mom was a big PTA support, sat on a few boards if memory serves me correct and was a regular parent volunteer in the classroom. As a parent, I knew no other way to be involved with your child and see them grow an flourish. Little did I know that reality is quite jaded, as many parents don’t seem to give a shit about further their child’s development or that of the school by being involved in PTA. Harsh? Probably, but it’s warranted, at least in my case.

Since my son walked through the doors and into kindergarten with Mrs. Gaul, I have been fully committed to his education and supporting the school. Why wouldn’t you want to be? Teachers at his school are absolutely amazing! Now if they were only paid justly for their duties and responsibilities, everyone would benefit! Why was I involved? Going back to my mom, I knew no other way. Volunteering in the classroom, paying my $10 PTA dues (you would be amazed at the number of parents who can’t come up with $10, but send their kids a lunch bag full of crap to eat, I am sure some how, some way you CAN come up with $10 to support your child AND the PTA.)

Going on my 6th year of elementary school, five of which I have served on the executive board, the support of parents or should I say lack of, never ceases to amaze me. You always see the same handful of parents stepping up to volunteer in class, going on field trips or work a PTA sponsored event. Why? Are you really THAT busy as a parent you can’t give your child a few hours of your time? Yeah, okay I hear you. You work, guess what, SO DO I! Eight hours a day, five days a week with a two hour round trip commute. Yet I still find time to pick my child up, talk to them and support them in their school functions and extracurricular activities. What’s your excuse now?

Until my son says he doesn’t want my support at school, I will continue to invest my time and make an effort to better his education by being involved. Actually, this year he told me he didn’t want me working in his 5th grade classroom, so I respected his decision and have yet to work a day in his class.

“Students with parents who are involved in their school tend to have fewer behavioral problems and better academic performance, and are more likely to complete high school than students whose parents are not involved in their school. Positive effects of parental involvement have been demonstrated at both the elementary and secondary levels across several studies, with the largest effects often occurring at the elementary level. Research shows that students perform better in school if their fathers as well as their mothers are involved, regardless of whether the father lives with the student or not.” (source)

To this day, I know of only one other day, I have met who has been as involved with his children, as I have with mine. He is an amazing dad, who has gone through a lot of pain and bad situations, but has raised two outstanding kids. So dads, what’s your excuse? The only time I have seen dads involve at our school is the PTA sponsored, father/daughter dance. Then again, all their dad has to do is show up. Really, it’s that simple. Outside of that, I have a really hard time identifying with any other dads who participate on a regular basis. Oh, that’s right, you are the moneymaker, you work and can’t help out at school or spend $10 to join the PTA. My mistake, guess I was looking for real men who care about their child, want to be involved and actively be part of their child’s developmental years.

Regardless of the “why” I still find volunteering and being involved a rewarding experience, one that no one can take away from me. I can honestly say I have had a great time over the last 6 years seeing my grow, thanks in part to the great teachers, leaders and coaches he has had. Parenting, like employment is a full time job, why don’t you look at working some overtime and volunteer for your child. Seeing a smile on their face is reward enough.