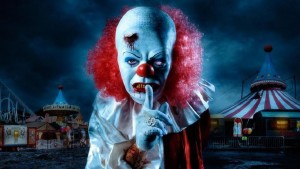 At the end of October last year, I was rather frustrated with how The 6th Fright went at Vintage Parkway, my son’s elementary school in Oakley. Lots of little problems that were overlooked a budget that went well over what I should have spent and a lack of foot traffic because of a late opening all contributed to having very little desire to construct a haunt this year. But, as all things go, it’s nearing the end of September and that desire and drive has FINALLY reappeared. It’s taken longer than I wanted, for the creative juices to get flowing, but the clowns are nearly ready to be let out, so to speak.

Building on last year’s theme, I have made the unpopular decision to center the haunt around clowns. Many adults and kids have this phobia of clowns (coulrophobia), as do teachers and staff, which makes this year all that more enjoyable for those of us behind the scenes. It will be a fun house of clowns everywhere you look. Originally I intended to do a carnival theme, but was lost for good ideas outside of clowns and parent participation, which is next to non-existent the past 2 years.

This year I will bring back some haunts that I have included the past few years, but also show off a few new ones as well. I feel it’s a good mix. In the planning of the haunt I have noticed the layout is much more simple than in previous year, which should make of a quicker setup of the walls. Like last year, it will be a combination of wood panels, black plastic, as well as black sheets. Currently there are six different haunts included for this year’s harvest carnival or shall we say, “carn-EVIL” where the clowns will run wild! 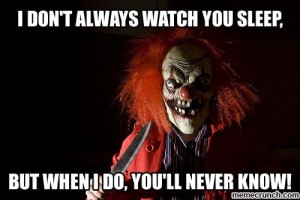 Unlike last year, I am not waiting to be given a budget and have moved forward purchasing props and animatronics in order to make this year’s haunt the best in the last 3 years. Most all of these purchases will end up going in my collection and will be reused for Halloween at my house when my son no longer attends Vintage Parkway. To accomplish what we want, it was going to come down to paying for and building props in order to make this a great time for kids, parents and staff. But considering what the school had for props when I took over, they should be set for years to come with drop windows, hundreds of feet of PVC pipe for walls and some props that can be reused.

It’s my hope there are volunteers who sign up to help the haunt out or we will end up experiencing similar problems as we had last year. The “hired help” last year wasn’t outstanding, one even walked out in the middle of the haunt. Unfortunately, that doesn’t work when you are needed for just 2 hours scare kids. This year, it’s my hope to get a total of 6 adults or teenagers (God forbid, I would probably be better off with 8th graders) to manage the door and “clown around” inside the haunt. In years past, 5th grades have been called upon to act as guides and actors/actresses inside the haunt. This year, the number of kids required is going to be less than last year, as it’s unmanageable with 35-40 kids who sign up to participate. The kids inside the haunt have just ONE responsibility and will require some blood hands (which also stains the skin for a few days). Fifth graders will also be acting as the guides this year as well, it’s my hope they don’t shine their flashlights at scary things inside the haunt. Nothing more frustrating to be dressed up in my dot suit, only to have the guide shine the light on me when a party of guests walk into the dot room. 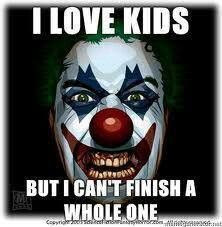 As of today 5 adults should be able to manage all the haunts inside and single adult and 5th grader to manage the door and take tickets for entry. Managing the door is a big deal, too slow and not everyone will get through. We saw that exact problem last year opening about 20 minutes late because no one was designated as a ticket taker. Too fast and the haunts don’t have time to reset for the next group of guests. Hopefully we can get this down properly this year and everyone has fun.

In the end it’s all about the kids, not doing a haunt would not make the Harvest Carnival what it is, fun. Fun for the kids, parents and staff that are all involved in organizing and running the event. As long as kids exit the haunt in tears I know we will have been successful in scaring them. So they might not sleep that night and sudden develop a clown phobia.