It was never my intention to take up karate after getting my son involved after a 6 week special for $79 at Oakley American Karate last October, where they teach the Isshin-Ryu discipline. This was actually to provide my son an outlet for physical activity, while providing a strong emphasis on discipline, respect, goal setting and perseverance. I am very proud of  what he has achieved since starting, attaining his gold belt in December and subsequent orange belt, last week.

After watching Sensei Bright teach for 2 months, I was convinced I knew the basics and what to look for as I attempted to help Zachary train at how to gain the required stripes necessary to achieve the next rank. He didn’t want to listen because, “dad you don’t know karate” was the answer I usually got. While he is correct on some level, close observation and listening to what Mr. Bright was teaching provided me a good foundation, which I had hoped to share with Zach to make him a strong student.

We discussed it and I told him I was going to start karate, not as a competition, but to complement him and work together towards the ultimate goal, the black belt. Perseverance and dedication are two words that come to mind, along with practice something he isn’t to keen on, unless it comes in the form of console of PC games. 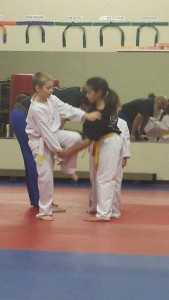 Time and time again I have attempted to tie the electronic world to that of real life situations. In order to gain confidence and get better, practice is required. I might have turned him off to some degree with managing little league, wanting him to practice more in order to succeed. Karate is much the same vein, unlike little league, karate is an individual competition, where you must work on continually improving yourself.

I started in the adult class the first week of December and stepped on the mat with confidence, knowing I had a good foundation, yet still felt intimidated by “adult” students, some who were a third of my age, but years and ranks (belts) ahead. Yet, I went in with the knowledge that I was not competing with anyone but myself.

It was my hope that enrolling in class would give my son the reassurance that I knew what I was doing and we could benefit from each others help, especially as he gets older. I would not be surprised if he was kicking my ass in a few years as he grows, something I will be to be wary of. It was with that premise that I started working toward my own black belt. 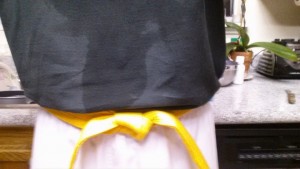 On Thursday I tested for my first rank, that of gold belt. The early belts teach students the basics; punches, kicks, combinations and self defense. This is the foundation on which Isshin-Ryu is taught at Oakley American Karate. Students advance from white to gold, orange to blue before getting into the more challenging green and brown belts that require more study and practice in order to advance within a given rank. Red belt is the final step before testing a student to become a black belt.

Much like some of my other personal challenges, such as running long distances or attempting an Iron man Triathlon, I now want to achieve a black belt before I am 50 years old. That would make Zach 14 (possibly 15) if he sticks with it that he could be testing for his black belt. As I work toward orange belt I look forward to the challenge that lies ahead. Hopefully together we can achieve greatness through karate, while learning fundamentals that can help us through life.

For those who now have Kung Fu Fighting playing in their head…enjoy!