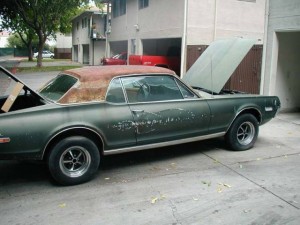 The time has come and my decision has been made. While it’s been a long time coming, I have decided to put the 1968 Mercury Cougar XR-7 up for sale. I have owned the car since March 2003 when I bought it from a friend who lived up in Santa Rosa, CA. He was the second owner, with his grandmother, who took initial delivery in 1968 as the original owner.

Prior to the birth of my son I had more free time to dedicate to restoring the Cougar. While the cat was drivable, it wasn’t safe but was excited with a smile on my face whenever I got behind the wheel. After some searching and discussion on MercuryCougar.net I decided to go for a full, drivable restoration. Little did I know what I was getting into. Even if I did know prior to ripping the Cougar apart, I still would have made the decision to restore it.

As things go, priorities changed in my life. While my desire to own, restore and drive a Cougar were alive and kicking, I just didn’t have the sort of time I had when I brought the car home. Over the next few years I started putting money into what seemed like a bottomless pit.

I purchased a few front end kit in October, 2005 and sent the C4 transmission to be rebuilt by a local shop in Brentwood, CA. Delta Bay Mustang became my local go to shop for parts. Not long after the new transmission I sent the Cougar in to have a new exhaust system installed with an ‘H’ pipe, Flowmaster mufflers with chrome, stock tailpipes.

By August all four brakes and the front end were rebuilt. Looking to get the Cougar safe and drivable, I purchased parts to replace the rear end. My intentions from the start were to make this XR-7 a daily driver, but as I continued the tear down and discussed with other Cougar owners I saw how extensive this project was becoming.

In April the following year, with spring upon on I made the decision to pull the 302 from the Cougar. Originally I decided to repaint, repair and replace parts on the engine, but after looking at it and the amount of crud and oil on the engine, one thing led to another and the engine was on a hoist sitting above the engine compartment. Soon I would send the 302 to Aaron at Bad Ass Engines in Sonoma to be completely rebuilt.

Four months later I would get a call from Aaron that the engine was done and ready to be picked up. Unfortunately once the engine got home, very little else was done. Time had started to dry up and any discretionary income I previously had was going into the house for upgrades and remodeling.

If it wasn’t enough to have an empty engine compartment, I decided to start tearing shit out from the interior and trying to complete work that needed to be done that didn’t cost any money, but time. I spent time grinding and sanding the care in order to prep and shoot with a rust inhibitor. Work also started on the engine compartment to clean it up, repair the battery ledge in order to paint so I could get the engine back in the Cougar.

Now 7 years later that is where the project has stood. Time invested is priceless, but the nearly $15,000 spent has me frustrated. I just don’t have the time or space to work on the Cougar. I would love to finish this project, but realistically it will continue to sit, covered waiting.

Now I have put out feelers to a few well place Cougarholics in order to sell the 68 and get a portion of what I spent back. Obviously I won’t get what I put in, rarely does that ever happen, nor do I expect that. However, I would like to recoup a portion of the costs of the engine, which would mean giving the Cougar away, but I am okay with that.

If you are interested in tackling a project car please feel free to email me at stoumi [at] the6thfloor [dot] com or you can contact me on Facebook at Stephen Toumi. I can provide all the paperwork I have from the work I have completed, as well as updated photos of the Cougar. I would like to sell by December and you will need a trailer in order to pick the car, engine and parts up. For more information you can visit this link. For additional images of the Cougar, you can download 30 of there here.