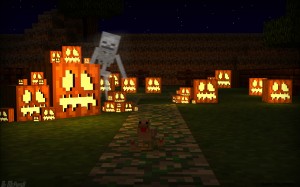 Just give me a minute and think of this. There are MILLIONS of people who have played and experienced Minecraft created by Notch and later developed and published by Mojang. In the many years of online gaming, I have seen very few games that had this sort of impact, not online online but offline. I am sure if we wait long enough we will get a Minecraft movie out of Hollywood. You laugh, I am sure some producer is trying to find a way to capitalize on this moneymaker.  While Halloween 2014 hasn’t quite got here, the Harvest Carnival at Vintage Parkway has come and gone but it has given me time to reflect and consider our options for a Minecraft Halloween in 2015.

What if your kids could walk though the epic world of Minecraft. Now don’t get me wrong Minecraft isn’t all that scary, unless of course you fall into a darkened hole and hear, “Ssss…” Could we capitalize on Minecraft and turn it into a haunted house for the Harvest Carnival? It would appeal to near every kid and quite possibly many parents. The gore factor is minimal with no blood being spilled in the actual game. The game features aspects of Halloween; pumpkins, skeletons, zombies, corn stalks, spiders and the present, creeper.

While we are over a year away from next year’s Harvest Carnival, I am excited about the prospect of exploring this idea and potentially capitalizing on the phenomena that is Minecraft. Just consider the wow factor and faces on kids when they come face to face with a creeper or meet Steve. I am sure we could go as far as introducing Stampylonghead and iBallisticSquid to the mix.

The layout could include some caves covered in diamond, gold and redstone, maybe add a house with zombies trying to break down the wooden door. Torches could be mounted on the walls to provide light and keep the spiders and creepers away. The possibilities are endless, much like the game. If your imagination can dream it, you can build it.

This would make plastic walls more valuable, but the would need to be painted in square blocks depending on what sort of area we were creating. Inexpensive LED lights could bring blocks to life as redstone, as well as power torches. Colored cellophane could provide the necessary color changes to white LED lights. PVC could still be used as a frame with plastic and cardboard bring used to create the necessary effects. All creatures could built using cardboard.

Right now let’s get through Halloween but I am going to further delve into the realm of Mincraft and attempt to use it as a theme for next year’s haunt.