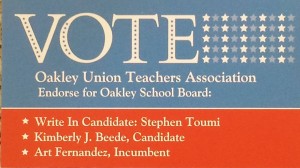 Near the end of the 2013-2014 school year I was introduced by my son’s teacher to a third grade teacher, who was the Vice President of OUTA (Oakley Union Teachers Association), as I showed an interest in possibly running for the school board. As a volunteer and PTA board member, I wanted to become more involved and this position was a worthwhile venture.

Under her instruction I attended a few school board meetings, following the agenda and listened to what was going on in the Oakley Elementary Unified School District. After a few meetings, the Superintendent introduced himself to me and I explained my reasons for attending the meetings and considering a run for an upcoming board seat in November and offered his support

Over the summer I procrastinated on my submitting my paperwork, it was always, “next week I will get to it.” I was having a challenge finding a position I wanted to run under. I contacted teachers I knew and inquired about issues and complaints they had with the district in an attempt to find a position I would be passionate about in order to back my campaign.

That passion never appeared. As deadline day for filing approached I still had not written my statement. On the day I was supposed to be submitting my statement, I was finally writing it. The words, the passion never came together in a single 500 word statement. I finished a rough draft and decided to email the union and apologize for getting their hopes up, but I would not be running for the school board.

As a new school year dawned on us, I started volunteering again at school and faced my PTA responsibilities at treasurer. I was approached by the PTA President, who was inquiring on behalf of the teachers if I would accept a nomination as a write in candidate for the school board. After the filing date passed I had not thought much about it, but told her I would accept the nomination as a write in candidate.

While facing an uphill battle, the teachers are backing my campaign as a write in candidate for the Oakley School Board. Business cards (as seen above) were made and distributed to myself and Kim Beede, the other challenger to one of two seats up during the election.

Since that time I have had an interview with the OUTA political action committee, answering their questions regarding my position on a number of different topics. I have also given feedback to a new of the local newspapers as well. My position is “Kids First” as school starts and ends with our kids. Any other topic usually impacts the kids. I support OUTA, as the teachers in our district are in dire need of a raise and continue working at 2007 wages. Sadly the district has not released excess funds in their reserve for things such as raises or material for the newly implemented CCSS (Common Core State Standards). I have been asked by a few individuals on Facebook where I stand on CCSS. As I replied to another parent,

“I can’t say I am a big supporter of it. Started seeing it last year, when my son’s second grade teacher started teaching CCSS to them (addition/subtraction). I had to ask the aide how to do the math because I had no idea. I don’t complain about it, since it appears it is here to stay. However, I do think the district needs to shake some money loose from the reserve fund in order to get teachers the necessary materials in order to teach from. CCSS is not only requiring students to make an effort, but teachers as well to adapt and learn the methods. I also think that some students who aren’t up to speed will end up falling behind very quickly and won’t be able to get caught up. The sad thing is many students go home and ask their parents for help. Guess what? They can’t help because they don’t know the methods and revert back to, “this is how I did math when I was your age” answer. I, like many grew up in that age, asking kids to learn new methods that make them think is great, but I don’t like how it was rolled out without the necessary cornerstones in place for the teachers.

Regardless of the outcome, I am very pleased to have the support of the teachers union. It’s really a wonderful feeling, as a father and volunteer to have all these great individuals coming together to provide support and their endorsement. Hopefully the results turn out in my favor after the election, regardless I have nothing but praise for the teachers and everything they do at Vintage Parkway and the other schools, both in our district and outside. Education is very important and these folks do a great job teaching our kids.

My name is STEPHEN TOUMI and I am running as a write in candidate for the Oakley Unified School Board.