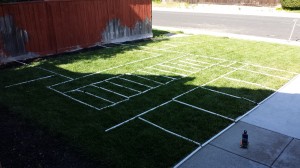 The haunting continues as my son and I spent the better part of 3 hours playing with PVC in the front yard yesterday. Neighbors driving by gave some odd looks driving, seeing my front lawn full of PVC. As you read, I laid out section one, which is the entrance, first room and a twisting hallway. As I hauled out the PVC from storage and set up my table I went back over the plans I had drawn. It’s interesting to note that on paper it appears I have much more room, but once I had the PVC laid out I realized there would need to be some modifications to the layout.

Last year the original plans I drew up had to be modified on the fly since I measured the stage incorrectly. The only way to make things work were to make 2 foot hallways. Talk about narrow! In fact these are too narrow for people to walk through, thus the labyrinth was a failure last year. This year I still included some 2 foot hallways when transitioning between the 6 different areas I have laid out. Again, it begs the questions, are these hallways and corridors too narrow? 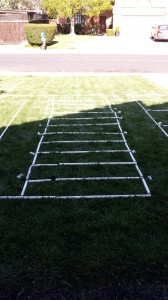 As I walked the PVC layout on ground I realized a few actor corridors I had were too wide, while some of the hallways for guests needed to be wider. I decided to decreasing actor corridors to 2 feet. While actors usually won’t be actively moving through these corridors, it does allow for enough room to stand/sit and perform the given task. Two areas, Oodles of Noodles and Clowning Around seemed too narrow when walking the layout. These were designed as 3 foot corridors, but realized I was going to have further issues with props and devices I had planned to use in those area. So taking a foot away from the actor corridors I increased these hallways, used by the guests to 4 feet wide. Walking it a few more times, I realize this is going to work much better.

All these changes in the original plans doesn’t account for the fact I have not addressed the 2 foot hallway issue, especially in first part of the layout, where the halls twist and turn for about 18 feet. Without a major design change, I could increase the width of a few of the hallways, while keeping others narrower. Not sure it will have the desired effect, but there just isn’t the necessary room in this area of the haunt. Further review and ideas are forthcoming. 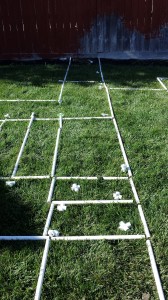 Overall I am pleased with how the design is coming together. The decision to start very early and layout all the PVC as it’s going to be erected has been invaluable. This has allowed me to find flaws (like narrow halls) that have would have remained overlooked on paper. It also allows me to see just how much material will be required. So far I have a short list of PVC connectors. Yes, with some $300 in PVC last year we still need more this year, but it will be a fraction of what we spent last year.

Once I have the layout finalized and all the PVC in hand I will build the entire layout in the front yard, 25 ft. x 34 feet. It will also require the 16 feet of wooden hallways I plan to construct in order to accomplish, what will probably be the centerpiece of the haunt this year. Then again the dot room could also be a surprise to those who experienced it last year. In fact this is the next area I am going to work on in order to get the sheets to hang in a circular pattern, which only increases the effect for the actor hiding among the dots.