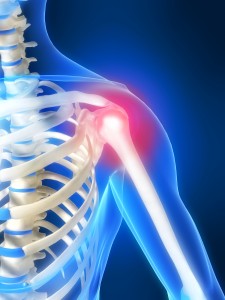 “No excuses!” That was the motto I was living by as I trained for 14 weeks while training to run my first half marathon. During that time I missed only one, midweek run and felt good about my accomplishment. It’s very easy to talk yourself out of exercise or say “I’ll do it tomorrow.” I have been struggling the last 3-4 week with ongoing shoulder pain. I underwent and MRI in August, but it took 2 weeks to get a follow up appointment with the orthopedic surgeon.

I finally had this appointment 2 weeks ago and in the 5 minutes he saw me, he referred me to an other orthopedic surgeon who specializes in shoulders. I met met with this specialist this week and he confirmed the finding. Aside from calling the shoulder a bit arthritic, there were indications of fluid in the joint, bone spurs and a tear in the labrum and bicep tendon. Chances are good it will be arthroscopic, but he said he would let me know more once I was contacted to make a date for the  surgery.

Life after 40 has been tough. First it was right right knee in 2009, then the left knee in 2012, now the left shoulder in 2013. What’s next? So this upcoming surgery has put a hold on much of the exercising I have been doing. I haven’t lifted but three times the last 2 weeks and have only put 6 miles in during that period.

On a positive note my wife persuaded me purchased a set of hanging abs straps for my Rogue Fitness power rack. I have decided to get a bit more serious on the core and strengthen my abs in order to make me a better runner. Chances are I will only be able to use these straps for about 2-3 weeks before my surgery occurs.

Talking to the orthopedic surgeon he said it was be about 2 weeks off from work because of the pain and medication, another 2 weeks with the arm in a sling, followed therapy and at least 8-10 weeks before strengthening the shoulder. Going to be another long road to recovery and plans I had to run in the Urbanathlon in November and my first marathon in Sacramento the following month are now on hold. Thankfully I will have time to recuperate and strengthen for challenges in 2014.