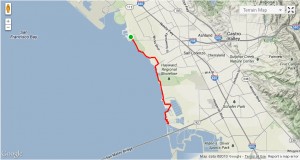 Today was race day in San Leandro, a date I had committed to prior to starting my running adventure. I took the first ‘couch to half marathon’ plan I found on the Internet and looked it over. It seemed feasible, so without hesitation and without starting out walking, power walking or jogging I hit the ground running…literally.

I didn’t really know what to expect in my first race. I had spoke to others who had ran and the main point seemed to be the same, run your race and don’t get caught up in the hype and excitement of race day. It seemed easy enough to do and I had no doubts I would finish the race. The burning question was how well would I finish.

I didn’t want to get caught up on a finish time, as it could spell disaster. The numbers I had worked out based off on previous long runs, including a 13.1 mile training run would see me run a 10:30 min/mile with a finish time around 2:20. Strangely enough I never saw either one of those numbers during the time I was on the course today.

There were a few factors that made a big difference today then during my long training runs. First I decided to run with 11 dates in my pocket to use as fuel on the course. I am not a goo or gel type guy, tried peanut butter, hummus, honey, potatoes and a few other odd snacks, but dates seemed to have what I needed in order to maintain my fuel. Second the temperature. In nearly 4 months of running I have NEVER run with the temperature at 59 degrees. Most all of my training took place during 90-95 degree heat with a few runs exceeding 105 degrees! You would think I was training for Badwater 135!

Those two factors were key to my run today. One thing I tried to avoid, raw nipples. Much of my training was also accomplished without a shirt (had to get my Vitamin D while training, right?) so this never even occurred to me, until I had my first long run in which I wore a shirt and my Camelbak.

Holy hell! Never thought I would get raw nipples from the my shirt rubbing for 2+ hours, but it happened. I thought I had it whipped today when I covered my nipples with band-aids. Guess I should have used waterproof band-aids as I lost them somewhere on the course, but didn’t realize it until about mile 9 when the soreness started to creep into my chest. I’ll be glad I had an orange shirt or I would have ended up like this guy. If there is a next race I will be sure to take this advice and use Transpore medical tape.

Even with sore chaffed nipples that did not hinder my performance. When the gun went off at 8AM my position was in the middle of starting pack and took a few miles before runners spread out on the course. Yet after the first two miles I kept telling myself I was “too fast” with a 9:15 and 9:16 mile. That was 1:15 off the pace I wanted to run, but I tried to slow the next few miles, but that resulted in nothing slower than a 9:30 for miles 4 and 5. 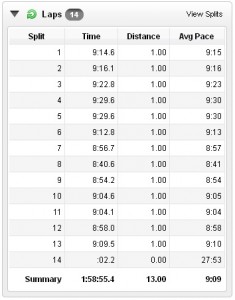 Just past 6 miles was the third aid station. I brought no water for this race figuring I could get by on the aid stations at miles 1.55, 3.0, 6.55, 10.1, 11.45. I found it odd to have two so close together, but it did help on the home stretch. I only took a single cup of water at each aid station and attempted not to slow and lose time. Overall it seemed to work well. I made the turn just past mile 6 and started back towards the finish.

I dug into my pocket and pulled a date out popping in my mouth. The race was nearly done as I only had a single date remaining for the next mile. I was hoping to pick up the pace a bit more at mile 11, posting 9:04. I had gained another :06 seconds at mile 12 as I came across the last bridge and the park was now in sight.

I probably started my sprint a half mile too soon. I had one woman who had been pacing me for the last 4 miles and I pulled ahead figuring “this is it, I can make it.” With about a quarter of a mile I could see the finish line. The pathway we were running on was crowded, as I past a black woman trying to control 5 dogs on leashes. I also passed up some slower runners, probably from the 10k. I hit the grass with just yards remaining and started to run out of gas. I got passed within a few steps of the finish, but crossed with a big smile on my face as the race clock recorded a time of 1:58!

Within a few yards of the finished a co-worker of mine, who had run the 10k was there to great me with a handshake and words of congratulations. I was still surprised I pulled in nearly :22 minutes off my goal and nearly :31 minutes off my training run of 13.1 miles.

So what did I learn? I probably pushed myself a bit harder today than I did on my training runs. Then again, those long runs were not set up to see how fast I could run them, but to get the longer miles in. In the heat a 10-11 minute mile seemed to be a good time to shoot for, but it didn’t really correlate on race day. Who knows I might have been stronger if I had run a 10 or 10:30 mile for much of the race.

Looking over my entire race, mile by mile I was consistent. Actually I was stronger starting with mile 6, so that’s a big confidence booster. I also learned to stay within myself, but to use other runners to set your pace. I picked up a guy who had a good pace going at about mile 9.5, we were stride for stride for the next 2 miles. Although I think I got the better of him as he seemed to be struggling, not that I was but I was still running at my 9 min/mile pace.

In the end I finished 184 out of 511 runners overall and 14 out of 23 in my age group. No shame in that at all. I was very pleased with my effort and all the long hours and miles I had put in to get me over that finish line. Never during my training did I think that a sub 2 hour half was possible, especially in my first half marathon. I did set some PRs during the run, on the 10k (55:20), 10 miles (1:30:41) and of course the half marathon. Now to relax and reflect.