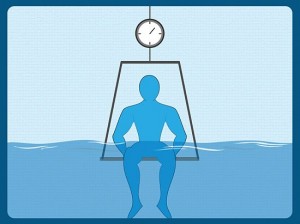 As I sit here eating oatmeal this morning I am pondering my decision to contine with intermittent fasting (IF) as part of my workout, something I began back in April as an experiment. About 3 weeks into this, I decided to make IF a daily part of my routine. The goal of IF was to gain lean muscle, while losing body fat. I currently have an 8-hour “feeding window” that opens between 11am and 8 pm. This allows me a small meal before I get home to lift weights or run. Once I am done with my daily exercise, I consume a protein shake followed by dinner and a snack, in hopes of getting my daily calories in.

On Thursday I had my fourth hydrostatic test over the last 12 months with my first test occurring in June, 2012. At that time I was pleased with the results, weight, 179 lbs. (lean weight of 151.1 lb) of which 27.9 lbs. was fat or 15.6%. Since that first test the only constant has been the plant-based diet. The exercise regiment has changed for nearly every test. Prior to the first test I transitioned from working out at home on a Bowflex Revolution to joining a gym and working a split routine. By the time of the second test I was just starting to follow Stronglifts 5×5. Things remained fairly consist through February, although I lost 1 month of lifting helping my wife recuperate from major back surgery at the end of December. All my time was for her, I stopped lifting.

This current test now takes the running I have been doing (since April) into account. The results were somewhat mixed. I was a bit discouraged by what I heard and read as Mike (the tester) went over the 4 page report with me. When I started my journey on the road to health my goal was twofold. First lose weight and second decrease my total cholesterol (TC) so I did not need medication. Within the first 10 months of changing the way I eat, not only did I meet my weight goal (175 lbs) I exceeded that by 3 pounds. I wanted to drop my TC to 150 mg/dL, not only did I meet that goal, I exceeded that with 130 mg/dL. The only exercise goals I set were when I joined the Stronglifts Inner Circle (SLIC). I wanted to  squat 240 lbs., bench 140 lbs., and deadlift 260 lbs. As of today, I have only achieved the bench goal.

The real change to my exercise was decided to take up running on the last day of March. Since then I have continued to add miles to my total each week, decrease my times, increase endurance and be able to run faster. I also decided to set a goal of running in a half marathon on August 3. This has been the motivation to run. Why do I mention all of these exercises? The 4 page report I was looking at and the numbers I heard frustrated me.

My weight for the test was 174.4 lbs. or just over half a pound off from my goal weight. I have been within 5 pounds of this weight with the exception of my February, 2013 test which saw me weigh in at 182 lbs. The most frustrating number was the ‘Lean Lb.’ or lean body mass. I was hoping for another increase (of 5 lbs)  over the last 4 months, which would have brought my increase to 10 lbs. of lean body mass, unfortunately that gain I had hoped for was dashed when I saw I had lost 3.25 lbs. of lean body mass. I was discouraged, especially considering I adhered to a strict routine of lifting weights 3 days a week with continual gains up until just a few weeks ago when I had to deload a few exercises and stop two lifts altogether because of shoulder pain.

The other number that caught my attention was seeing my body fat had dropped to 13% (a loss of 4.35 lbs.)! I had been told quite a few times on the SLIC that my strength gains (muscle) would be compromised with the addition of running to my exercise regiment. I do believe that to be true based on the body composition results. Still weight lifting and running can coexist and I have shifted my focus and goals. Even with the naysayers on board, I am still pleased with the progress. Never thought I would see my body fat reduced to just 13%! I am sure if I continue to increase the running that number would probably go lower, but I am not sure I want it much lower.

I would still like to lean out a bit by losing another few inches in the waist, but increase numbers around my chest and arms for healthier looking physique. The problem seems to be how much I eat or don’t eat. I continue to track my calories daily, which is not required but like running and lifting has become part of my routine. I am still adhering to a plant-based, whole foods lifestyle, but seem to have problems meeting the 2000 calories. Every day I lift or run there is a good chance I will be in a calorie deficiency.

So has intermittent fasting helped or hindered my progress? Not sure I have a definitive answer at this point. No longer to do I crave meals in the morning, usually going until 11am before having my first meal. Obviously the body fat number has improved considerably, did it come at a small cost in lean body mass? Possibly but received information,

One of the things I don’t want you to worry about is losing body mass. Unless you are starving and losing massive amounts of strength I wouldn’t worry to much about it. What has probably happened is you are burning off the fat that has stored in your muscles. People store fat in their muscles and if you cut a cross section of one it will sometimes look like a well marbled steak. So you aren’t losing muscle. You are just finishing one of the processes of leaning up. You are probably also burning off the fat that has stored around your organs too. And all this is a good thing! You want to get rid of all the extra stored fat, visceral and otherwise.

Bottom line regardless of what I decide, I need to eat more, especially with my half marathon quickly approaching. I am still pleased with all the progress I have made from diet change to exercise to improvement in my blood work numbers as well as body composition.