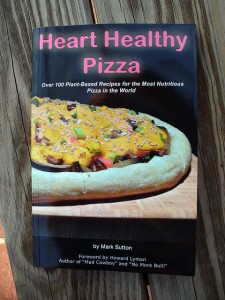 I have been on a pizza kick recently thanks in part to Mark Sutton’s book, Heart Healthy Pizza. It was a book I had been looking to buy for a few months, but I seemed to get sidetracked and would end up order other cookbooks. Prior to finding Mark’s book I was creating healthy pizza recipes, but they were more of a “traditional” pizza . I had tried to create my own version of a veggie pizza last year. It’s wasn’t anything overly impressive, I used a package of Bob’s Red Mill GF Pizza Crust, substituted my spaghetti sauce as pizza sauce (mistake) and piled on the veggies. I even added Daiya to the top of the pizza for those I were feeding who were not plant-based eaters.

While the pizza came out okay it was still lacking. Pizza as I knew it growing up came from Round Table Pizza. It was usually sausage or pepperoni or cheese, obviously full of fat, highly processed and dripping with oil. Pizza in college was all about what was affordable. “Pizza. Pizza.” was usually the cry and their 2 for $5 deal. Again, not a healthy option, but it was how I knew pizza. Over the years my mom made some pretty good pizza and I have experienced pizza from California and Chicago to New York. Everyone has their own idea as to what makes a good pie.

It was December, 2012 when I first learned about Mark Sutton and his book. It would be April before I finally purchased Heath Healthy Pizza I was thrilled to look at all the different options I had at my fingertips. To be honest I had to ask Mark on Facebook, his recommendation for my first pie. Not only did I have to select the crust, but sauce(s) and toppings I was going to us. It appeared a but more complicated that just unrolling some processed dough, squeezing sauce and tossing cheese and pepperoni on it.

Gone are the days of processed ingredients, everything I make for my pizzas now are all homemade; from the dough to the sauce to some of the toppings. Mark’s got all the bases covered, sometimes not the most conventional of ingredients, but surprisingly enough they come together nicely and taste amazing. For example, the Pad Thai Pizza (pg 23) I made had a simple, yet delicious Sweet & Spicy Chili Corn Sauce on top of a brown rice, chickpea and cilantro crust. As I said, truly unique combinations.

I was not too confident in working with dough and creating my own crusts. Yet last week I had the best success and honestly I thought I made a mistake, but one that worked to advantage. It was no mistake though, it was a basic whole wheat dough recipe from Mark’s book that demonstrated how quick and easy making homemade pizza dough truly was. I was so thrilled with the result I made pizza the next night, just to make sure what I experienced wasn’t a mistake on my part. Lo and behold, the dough worked and came out amazing!

I never really looked outside the box when it came to pizza sauce. If it’s red, then call it pizza sauce. I mistakenly used my spaghetti sauce recipe for my pizza. It wasn’t the right sauce to use, but as Mark demonstrated sauce doesn’t necessarily need to be tomato based. A quick look of the book index shows you wide array of sauces, including non-cheese sauces including ingredients such as tofu, beans, rice, quinoa, oats, barley and millet. Each of these comprise a variety of sauces to top your pizza with. As I said, it gets a bit overwhelming when you start thinking how you are going to combine your sauce and toppings.

Thankfully he does provide you with some “power pizza possibilities” in order to get you started. Prior to making my first Mark Sutton original, the Pizza Margherita (followed by the Nearly Nouveaux Mex), I actually make a BBQ Chicken Pizza from The Effervescent Vegan. A few Facebook comments made mention of Mark’s book and the rest is history. Let your imagination go, forget traditional pizza, give the ‘Really Reubenisque’ or ‘Clever Curry’ a try. There are no limits on pizza combinations. So many choices I am looking forward to expanding my pizza repertoire thanks to Heart Healthy Pizza.

I’ll be honest, while I have gone through the entire book, I haven’t read each recipe in detail. I do believe Mark uses vegan sausage, like MorningStar Farms, Light Life and Gimme Lean in some of this recipes. I tend to skip the highly processed vegan sausage, even the crumbles since these are not any better for your than their meat counterparts. I did however have excellent luck in making my own pepperoni last night.

Yeah, you heard me, pepperoni (it was actually the sausage). While Vegan Dad is no longer active, his blog remains and he ventured into the “mock meat” arena with some very good success. Whenever I have an inkling for a “meatless” meat I always check his site. I mistakenly used the homemade sausage recipe with excellent success last night, but called it pepperoni. Even from the first bite, my brain said, “this is sausage!” It was that good! Yet posting my success on Facebook I continued to refer to it as pepperoni, my mistake but it does give me a chance to make pepperoni tonight.

So far everyone who has tried a slice thought it was tasty. The first test was my 7 year old son. He was a bit hesitant, but I cut him a small piece. His first comment, “can I have a bowl?” followed by “it’s spicy!” I will count that as a success. Next came my mother-in-law and wife. I was thrilled to have them taste test, as my wife is very picky and my MIL is a fantastic cook. My MIL raved about the flavor, alone and one a slice of pizza. My wife, much like my son thought it was a bit spicy, but good. She has never been one for really spicy food. At work I have given pieces to 3 co-workers and all have commented positively on the flavor and texture.

While it wont’ be an every day food it’s great to know I have this meatless recipe as an option. As for Heart Healthy Pizza, well that is all I make these days. Thanks to a Mark Sutton for all his hard work and dedication to pizza. If you miss a slice or a pie now and then but don’t miss the cheese, oil and fat, his Heart Healthy Pizza book is the way to go.