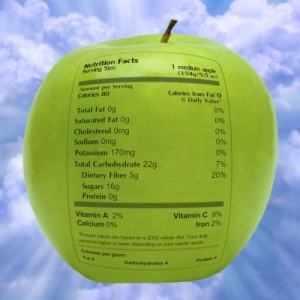 I don’t profess to “knowing it all” when it comes to nutrition. In 10 months I have only scratched the surface but would like to dig deeper and gain a better understanding of nutrition and the role food plays in our diet. For my discussion today, diet does not imply restricted eating to lose weight (although that is a result), but rather the food and drink regularly consumed by an individual. When it comes to nutrition, people are not sure what to believe as there is a world of misinformation being disseminated by special interest groups, industry, government, authors, doctors and other sources that it can mind boggling. Just who can you trust to give you a straight answer as it relates to food and you health?

While I don’t have a good answer for you, I do believe in the research conducted by T. Colin Campbell, PhD. Campbell “is an American biochemist who specializes in the effects of nutrition on long-term health. He is the Jacob Gould Schurman Professor Emeritus of Nutritional Biochemistry at Cornell University, the author of over 300 research papers, and the co-author of The China Study (2004), one of America’s best-selling books about nutrition (source).”

I learned about The China Study when I viewed the documentary Forks Over Knives last September, but it wasn’t until April of this year I purchased the book (read my review) and read it for the first time. It was an eye opening experience. The numbers alone are staggering! The research is presented in an easy to read and understand format. Yet millions are unaware of this book or worse won’t subscribe to the plan outlined in order to improve health.

Individuals are resistant to change. Many believe what they were taught in school about nutrition was correct, eating from the basic food groups or following a food pyramid will keep them healthy. But is that really the case? “Overweight Americans now significantly outnumber those who maintain a healthy diet…almost a third of the adults twenty years and over in this country are obese.” This cited from The China Study and the outlook is even worse as American eat out more and spend more time in a sedentary position, watching TV, playing video games and on computers.

“Heart disease will kill one out of every three Americans. According to the American Heart Association, over 60 million Americans currently suffer from some form of cardiovascular disease.” Yet many turn to the medical establishment to “cure” them of this disease. The U.S. spends more money for health care than any other country in the world (over 1 trillion dollars in 1997), yet the U.S. is ranked 37th best in health care system performance. All this money. As I have experienced, my doctor seems to be motivated by money more than the health of his patient.

As of the writing of The China Study, the third leading cause of death behind heart disease and cancer was medical care. This from a nation that spends more money on health care than any other nation in the world. How can that be? It doesn’t need to be this way, but people must “shift thinking toward a broader perspective on health, one that includes a proper understanding and use of good nutrition.” 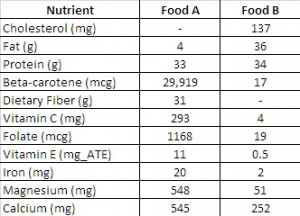 Many people are under the misconception that foods such as meat and dairy must be included in their “healthy diet” or they will miss out on key nutrients that we need as humans. Principle #3 from The China Study: There are virtually no nutrients in animal-based foods that are not better provided by plants. Case in point, the chart to the right comparing foods (500 calories of energy). Which would you rather eat for your health? Food A provides more antioxidants, fiber and minerals, which marginally less in protein. It’s no surprise to reveal Food A (equal parts of tomatoes, spinach, lima beans, peas, potatoes) is plant-based, while Food B (equal parts of beef, pork, chicken, whole milk) is animal based. Why wouldn’t you chose to eat the healthier option?

Moderation is no longer a way of eating I subscribe to because many American’s can’t limit their intake of “bad food.” Dr. Campbell cites, “the lower the percentage of animal-based foods that are consumed, the greater the health benefits.” While eliminating all animal-based products is the goal, Dr. Campbell says not to stress over it. For me and my health, it was all or nothing but I did give myself transition period that helped me cut back and cut out foods that I did not want to eat, namely meat, dairy and oil. Was it easy? No, but “moderation, even with the best intentions sometimes makes it more difficult to succeed.”

Many individuals I talk to regarding food, nutrition, diet and health always include “I can’t” or “I won’t” when I bring up a plant-based diet (lifestyle). Their reasons vary as to why they won’t try something different to improve their health or lose weight. I challenge many to give it 30 days following a plant-based diet, but to date, no takers. I even bring up the 12 day program that Dr. McDougall promotes on his site, but many feel as if they will be hungry.

My goals when I started were to improve my blood numbers by lowering my cholesterol and get healthy. Never did I believe I would have such radical results inside a year that my doctor couldn’t find anything wrong me during my last physical in August. The key, learning nutrition and thinking outside the box when it comes to what I ate.

Unfortunately this is very hard for some individuals. I overheard a gal at work say, “Ask Roberta, she has tried all the diets.” Again, it comes back to nutrition and learning what is should be consumed and what should be avoided and why. No need to count calories or subtract points or even be hungry. In ten months, if I was hungry it was because I was not eating enough good food daily. People will look at what they CAN’T eat as opposed to what they CAN eat.

As I have started to get a better feel for cooking without oil, meat and dairy, you can now toss in sugar and salt. None of these ingredients need to be in food to make it taste good or satiate you. I do continue to provide samples of my cooking to some of the women who are looking for a “healthy alternative.” Unfortunately I don’t think any of them will take me up on diet I follow. No longer is my goal to convince people that what I am doing is right. I am more focused on getting people to realize what is healthy and what isn’t.

I use work as an example again, another co-worker, Michelle says “I work out all the time, but I can’t lose weight.” Then she tells me how she cooks and eats. I give her some options and the first thing I mention, cut out the added oil to your cooking. No sooner do I say that and she seems lost as to how to cook without oil. It’s a teaching moment. She was given some other information this week from a low-carb follower, “don’t eat oatmeal or bananas” for breakfast. Huh? When did these foods suddenly become not good for you? When you need to limit the amount of carbohydrates you consume for fear these will make you fat, that is when. I reiterate, some people need to re-learn nutrition in order to take control of their health.

I know I won’t change the world when it comes to how I eat. I am very thankful to finding a healthy solution that works for me. Sure I give up a few foods, but I do believe I have become a better cook the past 11 months. My wife would probably agree with me, even though she won’t eat everything I prepare. That’s fair enough. More than following a plant-strong lifestyle, if people would pay more attention to what they eat and how some of the bad foods affect your health they would be better off in the end. It is my hope to plant a seed in people to understand nutrition.