While Curiosity hasn’t been on the surface  for even a week, its been a whirlwind of activity in order to prepare the rover for movement and science experiments in and around Gale Crater. It was amazing to watch EDL, entry, descent and landing live last weekend and see the joy and jubilation when Allen Chen announce “Touchdown confirmed” at 10:32pm PDT. What was even more amazing was confirmation of the touchdown in a thumbnail image. Curiosity prepares as the world waits for more details, information and images of Mars.

More so than any previous Mars landings, going back to Mars Pathfinder in 1996 and more recently with MER-A (Spirit) and MER-B (Opportunity) in 2003, I have followed the press conferences closer, wanting to learn what new information is coming out of the red planet. While we are still a few days away from possible science exploration the JPL members who have provided information on a daily basis, along with new images are to be commended for the early success.

The press conferences have been the best opportunity to listen to the latest information received from Mars. I have viewed parts of all the conference this week on Ustream and kept up on the latest images that have been released. One of the most impressive images was “spotted by NASA’s Mars Reconnaissance Orbiter as Curiosity descended to the surface on Aug. 5 PDT (Aug. 6 EDT). The High-Resolution Imaging Science Experiment (HiRISE) camera captured this image of Curiosity while the orbiter was listening to transmissions from the rover“(JPL).

“If HiRISE took the image one 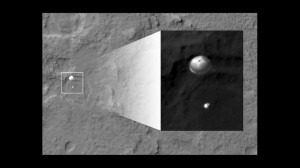 second before or one second after, we probably would be looking at an empty Martian landscape,” said Sarah Milkovich, HiRISE investigation scientist at NASA’s Jet Propulsion Laboratory in Pasadena, Calif. “When you consider that we have been working on this sequence since March and had to upload commands to the spacecraft about 72 hours prior to the image being taken, you begin to realize how challenging this picture was to obtain“(JPL).

Yet these images and the limited data are the tip of the iceberg as the rover switches over to the R10 software that will guide it on the ground of Mars, a transfer that will take 4 days to complete. Curiosity was born to drive,” Ben Cichy, Senior Software and Systems Engineer at JPL said. “The R10 software includes the capability for Curiosity to really get out and stretch her wheels on the surface of Mars” (Space.com).

Like many interested onlookers I want to see more images, the panoramic shots of the sprawling Martian landscape. Images like these allow one to dream. Let’s not forget that Spirit (no longer responding) and Opportunity are still on the surface (Where are they now?). Opportunity has now logged over 21.4 miles on the surface (Sol 3027 as of July 27). Their images were nothing short of impressive. With the new technology and cameras on board Curiosity, the mission is just beginning after the 350 million mile journey to the surface.